by Jeanette Stokes
Durham, NC: The Resource Center
for Women and Ministry in the South, 2002
163 pages, paperback. 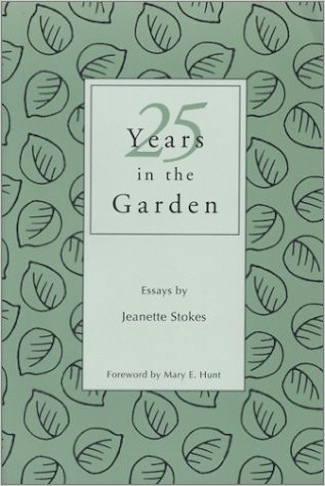 In 1977, Jeanette Stokes was a graduate of Smith College and the Divinity School of Duke University when she decided to carry out a special dream. She envisioned a center that would “provide resources and programs on women, ministry, social justice, and spirituality,” and so she founded what she called the Resource Center for Women and Ministry in the South.

In the mid-90s, during a sabbatical leave from her long-time role as Executive Director of the Resource Center, she started moodling* around with the essays she had contributed to the Resource Center’s newsletter. She spent months scanning and reformatting and correcting.

One day she e-mailed me to ask if I’d take a look at what she’d printed out. We’d known each other since 1993 when I was in divinity school and offered to do some volunteer work for the Resource Center. After reading the essays, I told her, “I don’t quite know what you have here, or how it should be organized, but I do know there’s a book in here somewhere.”

I was right. Not only was there a book in there somewhere, but it turned out to be a book that knocks my socks off.

25 Years in the Garden collects more than sixty of Stokes’ essays. The earliest is dated November-December 1979; the most recent, July 2002. In between is an on-the-hoof historical and personal record of one woman’s life as a clergywoman and social activist in a time of enormous change. Reading it is like taking my own pulse: familiarity mixed with intense concentration.

Some of the essays center on events in North Carolina that had national (and theological) significance — the Nazi-Klan trial in Greensboro, North Carolina in 1980; the defeat of the Equal Rights Amendment in the North Carolina Senate in 1982; the poultry plant fire in Hamlet, North Carolina, in 1992; the execution by lethal injection of Dawud Abdullah Muhammad (born David Junior Brown) in 1999. The simplicity of the writing often belies the complexity of the content. For instance, when Stokes describes walking through the scene of the chicken house fire, I smell the destruction; taste the outrage; and mourn the loss of life. The power of those sensations places me smack dab at the intersection of faith and public policy.

Other essays raise riveting questions. In thinking about Mary the mother of Jesus in the opening essay “Advent,” Stokes wonders, “What do you do for nine months while you are pregnant with God?” In Klan” (May-June 1987), she wants to know “What do you do while the Ku Klux Klan rallies in your town?” And then there’s “Epiphany” (February 1993), in which she asks “Why do we keep hammering away at the church until it blesses us or we change it?”

Does Stokes give answers? Not always. She’s wise enough to know that sometimes the larger gift is a needed analysis or a constructive surmise. The answers she does provide, though, are invariably helpful, often provocative, and always sane. For instance, the essay “Church” (March 2000) opens with a friend asking how she gets around her frustration at being part of the institutional church. Stokes responds, “Church is what it is. I decided a long time ago to stop torturing myself over it. I have not given up hope of changing it, but I have given up suffering over it. I find support and spiritual community where I can.” Many of us — or at least I — would do well to emblazon that statement in neon paint across our office walls.

All the way back in 1981 Stokes recognized that “Women in ministry have two perpetual problems with work. The first is finding work. The second is not letting the work kill us.” She goes on to say, “I used to think that when work did not hurt, it was play. Wrong. Work is still work even when it does not hurt.” While many of us recognize the validity of the statement, some of us still haven’t figured out how to live it. I, for instance, tell myself, “But this thing I’m working on is going so well, and I’m so interested in it, that I’m not going to interrupt myself. I’ll just keep going.” Stokes stepped out of this mindset back in 1990. As she says in “The Art of Feeding the Spirit,” that spring the Resource Center sponsored a conference by the same name. Afterwards, she had not only a “renewed appreciation for creative expression as part of a spiritual life,” but she had also “learned to look more carefully at what feeds my spirit on a daily basis.”

That decision marks a turning point in the book. The emphasis on the spiritual/political/activist life continues, but the heart of the book widens. Many essays model the spiritual discipline of self-attention, the way of honoring life and God that involves the decision to “live today as consciously as I can.” In one essay we get to sit with Stokes in a white Adirondack chair as she stares at a bush for two weeks “because I wanted to hear the inside of my head.” In other essays, we get to clean out compost bins with her; to attend a family reunion; to walk a labyrinth; to buy a loaf of bread from a bread truck in Italy (but not just any bread; it is “the most beautiful loaf of bread I’ve ever held in my own hands”); and to sit at her breakfast table as she eats from the same blue pottery bowl she’s used every morning for over twenty-five years because, she says, “it’s really nice not to have to start making up my life or responding to the unexpected until after breakfast” (“Bowl,” April 2002).

In the conclusion of that essay, Stokes says, “A spiritual practice is something you return to day after day. It’s a place where judgment can be suspended and one can accept oneself.” Did you know that? If I ever did, I’d forgotten. Her reminder, like so much of the book, refreshes and encourages me.

And then there is the exquisite essay “Alpha and Omega” (December 1993). Written to a friend who was in the last weeks of pregnancy at the same time that her father was dying, the essay holds within its pages the mystery and holiness of life itself. After acknowledging the heartbreak, Stokes says, “There is nothing to do but feel it. Feel it every day. The joy and sorrow. The baby’s kicking, a child’s laughter, the sadness, and the loss. It is all right there, splashed in bright colors on the canvas of your heart.”

In an article in the October 28, 1998, issue of The Christian Century, William C. Placher, a professor of religion and philosophy at Wabash University, attributes the boredom, depression, and stagnation in many of our churches to the superficiality of most popular writing on theological matters. Placher concludes that “Whatever else [we need], we need writers,” specifically formally trained theologians who are willing “to start taking some of the risks entailed in writing for a wider audience.”

An ordained Presbyterian minister, Jeanette Stokes has been taking that risk for over twenty-five years. Her power as a writer comes from her intellectual strength as a theologian; her sturdy and unquenchable faith; her integrity; and her awareness that life is splashes of color, sometimes joyous, sometimes heart-breaking. I have a few minor wishes: that more of the essays from the seventies and eighties could have been included, and that some of the essays were longer. The two-to-three page format makes the book ideal for both general reading and devotional use, but sometimes I wanted Stokes to fly further and higher with the topics, an impossibility with the length requirements.

* Ed. note: Stokes points out that the term moodling was a descriptive term used by Brenda Ueland in her 1938 book, If You Want to Write. “You know what moodling is,” Stokes says, “It is doodling without a pencil.” (p.73). Ueland described it as “long, inefficient, happy idling, dawdling and puttering” and called it essential to a creative imagination (Brenda Ueland, Graywolf Press, 1987 edition, p.32).