Home Book Reviews A Strange Stirring: “The Feminine Mystique” and American Women at the Dawn... 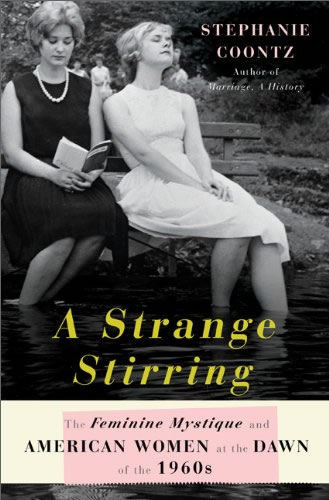 My mother graduated from college in 1960 with a teaching degree. The second in a family of four siblings, Mother worked her way through college and, I imagine, made straight A’s. Following graduation, she and three of her best friends took a vacation for several weeks, traveling from Kansas to the West Coast, stopping along the way to pick strawberries or clean houses for the cash needed to fund their trip. Then it was back again to Kansas, where she began a teaching career in Topeka, a long distance in those days from her family’s farm in rural Iowa.

One year later she married, moved to a farm in rural Kansas and began teaching at a small school a mere mile away. Two years after that, as she and my father welcomed my older sister into their family, she quit her job, never to return in the same capacity. Sometimes she worked as a substitute teacher, and after my youngest sister moved out, she served as a very well-loved teaching assistant until she was 70.

Mom would never admit it to anyone, but I imagine she felt “the feminine mystique” frequently and persistently even though she never read Betty Friedan’s groundbreaking book, The Feminine Mystique.

It has been almost fifty years since Friedan’s book identified the problem that previously had not been named—the yearning for something more than what society expected and urged women to be and do. Few can disagree that this study of American culture, loved and hated alike, had enormous impact.

One especially useful way to gauge such an effect is to listen to those who read The Feminine Mystique around the time it was written and allow those voices to construct the context for our understanding. In a new book, A Strange Stirring: “The Feminine Mystique” and American Women at the Dawn of the 1960s, Stephanie Coontz has done just that. Coontz is Director of Research and Public Education at the Council on Contemporary Families and teaches at the Evergreen State College in Olympia, Washington.

Using a wide variety of venues to collect her data, and pairing her findings with keen historical analysis, Coontz draws several conclusions, some providing additional insight into the 1960s when Friedan’s work created its initial splash, and some for today when many uncritically assume the mystique is no longer a reality.

Coontz begins her book by providing the cultural context in which Friedan’s study emerged. While many believe the 1960s in America constituted a liberal left turn of bra-burning feminists bent on destroying the very fiber of American society, Coontz provides a useful and eminently more accurate understanding of the 1960s, one that is more complex, and one that is “unliberated.”

In sketching this 1960s context, the reader is finally able to see that Friedan’s assumptions were deeply embedded in white, middle-class realities, but also that they were decidedly more conservative than those who have not read the book either know or remember. For instance, Friedan never urged women to reject desires for marriage or motherhood. Rather, she encouraged them to be not only gifted mothers and spouses, but to utilize their passions and abilities beyond the domestic sphere, to contribute to society at large.

Furthermore, Coontz reminds her readers, in most states during the 1960s women had fewer rights than men, including those related to property ownership, finances, employment, reproductive decision making, domestic violence and a host of other important areas. In 1963 when The Feminine Mystique was published, women were allowed to serve on juries in only twenty-nine states.

Not surprising, given Friedan’s—in hindsight—white, middle-class perspective, most of the readers of The Feminine Mystique were also white, middle-to-upper-class women. For them, the observations Friedan penned corresponded so closely to their lived experiences that when asked to remember their reactions to the book, they said that “everything clicked,” that their experiences had suddenly been brought into sharp relief. They saw themselves in Friedan’s trenchant analysis.

In the 1950s and 1960s, women had been sold a contradictory message: that on the one hand, women could choose their own paths; and on the other hand, that being a homemaker first and foremost would be the one thing that would create happiness and fulfillment. Women who stayed home and raised their families and yet did not feel the corresponding presumed bliss were grateful to Friedan for enabling them to see beyond their self-imposed guilt and their anxieties that “something was wrong” with them.

By naming what they felt when their lives didn’t carry the meaning society had claimed they would experience through marriage and familial responsibilities alone, they were given permission to move beyond inertia and take ownership of their abilities and happiness. And this is an insight Coontz is eager to note. Friedan did not recommend that the answer to the problem was to reject married life and children. Instead, she hoped women would grow, would seek personal fulfillment, not through mindlessly following societal demands, but by genuine critical reflection and personal action.

Coontz found there were some African American and working-class women who had read Friedan’s book, too, some with similar responses to those of white, middle-class suburban women— although usually with less enthusiasm because the paid work they did was not the result of some self-directed goal of self-fulfillment, but rather due to low household income and the necessity of working at even menial jobs because a paycheck was what mattered. And, as Coontz clearly points out, by ignoring the experiences of African-American and working-class women who were employed and who did maintain familial commitments, Friedan missed a vital opportunity to call attention to the reality that many women already were successful in combining work outside the home with their devotion to home and family.

There are many strengths of this study, especially Coontz’s careful historical research and analysis, providing a crucial (though often overlooked) context for Friedan’s work, including a thorough tracing of Friedan’s personal path toward The Feminine Mystique, along with a useful application of Friedan’s message for a new generation. Coontz also provides an extensive bibliography, opening for others additional research opportunities.

More broadly, Coontz provides clarity for the often misunderstood placement of Friedan’s analysis. The Feminine Mystique did not create a new wave of thinking or seeing the world for women; rather, women already experienced this. Friedan simply provided a way to focus on the underlying reality that women lived, although usually in isolated silence.

Additionally, Coontz brings to light three themes Friedan included in her study that are still factors in society’s way of shaping our lives. Friedan’s phrase, “the sexual sell” is even more potent today than in the 1950s and 1960s and, I imagine, is more strongly geared toward younger girls. I’m reminded of Jean Kilbourne’s marketing analysis and film series, “Killing Us Softly: Advertising’s Image of Women.”

Second, Friedan defended socially responsible work for women and men, an emphasis we would do well to promote in this era of extreme greed and corporate irresponsibility.

Finally, Friedan suggested when women participate more fully in the public sphere, personal relationships at home see positive results. I’d like to think today Friedan would also want to suggest that having women working in the public arena, utilizing their talents to the full, makes for a better overall society as well.

One lingering question from A Strange Stirring continues for me, however: were there any geographical or religious differences among Friedan’s readers? All too often, realities for one geographical region or ideological persuasion are imposed upon others, the assumption being that what is true to one area must be true in another. My hunch is that the reality is much more complex. Uncovering this complexity would probably bring greater insight to the feminist movement as a whole and could be useful in understanding the contradictory messages still aimed at women, fifty years after Friedan’s book made its mark.