Home Book Reviews An Altar in the World 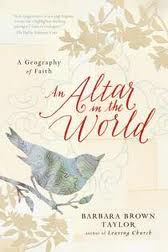 I recently had the privilege of hearing Barbara Brown Taylor speak about this, her latest book.  She noted that this is a book about “practice.”  “People are dying to know more God, not more aboutGod.”

Today American Christians particularly define all religions, including their own, in terms of beliefs.   But Taylor quoted from the nineteenth-century mystic Baron Von Hugel, who pointed out three overlapping spheres:  Institutional religion (the historical structures handed down through the centuries); intellectual ways to think about the big questions including all of the various theologies; and the mystical or “direct” sphere, the reality beyond language (direct experiences of God through practices such as prayer, feeding the hungry, giving things away).

All three make vital contributions to our spiritual growth but, she pointed out, there is a difference between admiring Jesus and following him.  She challenged her audience to see how many verbs we could use to describe our practice of faith.

Why are practices particularly important at this moment?  She pointed to two pertinent reasons:  First we share many practices with other religions:  food customs, pilgrimage travel, cleaning rituals, music, ways to concentrate on the transcendent, building Habitat for Humanity houses.  She noted that in Jesus’ last night on earth, he did not give the disciples more words to think about but two practices:  washing each other’s feet and eating a meal together.

Second, practices undermine the theological dualism that gives rise to dualism of body and soul.  Christianity’s historic denigration of the body “slanders the body and gives rise to lots of other dualisms.”  Practices are “antidotes to dualism” and bridges between human and divine realities.

In An Altar in the World, Taylor devotes chapters to eleven practices: “Waking Up to God,” “Paying Attention,” “Walking on the Earth,” “Getting Lost,” “Encountering Others,” “Living with Purpose,” “Saying No,” “Carrying Water,” “Feeling Pain,” “Being Present to God,” and “Pronouncing Blessing.”  They promote vision, reverence, groundedness, wilderness, community, vocation, Sabbath, physical labor, breakthroughs, prayer, and benediction.  She stresses that this is not about “succeeding” or doing anything “perfectly.”  In her Introduction she explains that “each [practice] trusts that doing something is at least as valuable as reading books about it, thinking about it, or sitting around talking about it.  Who wants to study a menu when you can eat a meal?”

When I heard Taylor speak of this book several years ago while she was in the midst of writing it, I thought it would be another book on traditional Christian religious practices.  I have read a number of them.  But the delightful genius of this book is that it is not traditional.  Taylor has an extraordinary gift of sharing with readers ways of encountering the Divine in the most ordinary events of our daily life—a walk in the park, recycling our clutter, getting lost by turning off the GPS and taking a different route home, having a short chat with the cashier at the grocery, really observing a dog, a cat, a butterfly.

In her Introduction to the book, she declares, “The Treasure we seek requires no lengthy expedition, no expensive equipment, no superior attitude or special company.”  In the book and in her speech, she told of a revelatory incident in her life.  Asked to speak in a church, she queried the minister, “What do you want me to speak about?”   His reply had deep impact:  “Come tell us about what is saving your life now!”  She realized it was daily practices, not theological arguments or speculations.

I was shocked when Taylor declared in her speech that she was 59.  Her beautiful mane of white hair was a clue, but I still remember her as a 20-something  years ago when we both worked at Emory University’s Candler School of Theology in Atlanta and both of us were seeking ordination within the Episcopal Church.  Over the years I have read several of her books with great profit, especially The Luminous Web, her thoughts on Christianity and science.

In her recent speech, she cited a story told by the Danish writer Soren Kierkegaard.   He said that if there were two doors—one marked “The Kingdom of God” and the other labeled “Lecture on the Kingdom of God”—most people would choose the latter.  She challenged us to choose the former, to stop reading about ways to improve our spiritual lives and start practicing.

An Altar in the World offers innumerable examples. And Taylor challenged us to find our own practices, ways to encounter the Great Mystery more deeply, ways that will change our world.

Jesus Through Jewish Eyes: Rabbis and Scholars Engage an Ancient...