Since I will be leading the Path on scripture at our next EEWC conference, how about a little preview? “Where Wisdom Calls: Crossroads and Open Gates” is quite a provocative theme for this conference. Was it only coincidence that I was reading about Her (Wisdom) the same weekend Letha Scanzoni reminded me that my council column was due? I had just discovered a fascinating chapter called “Wisdom for the Powerful” in a book by Richard Bauckham titled The Bible in Politics: How to Read the Bible Politically.1

The words of King Lemuel, king of Massa. An oracle that his mother taught him: No, my son!
No, son of my womb! No, son of my vows!
Do not give your strength to women,
Your ways to those who destroy kings.
It is not for kings, O Lemuel, it is not for kings to drink wine,
Or for rulers to desire strong drink;
Or else they will drink and forget what has been decreed,
And will pervert the rights of all the afflicted.
Give strong drink to one who is perishing, and wine to those in bitter distress;
Let them drink and forget their poverty,
And remember their misery no more.
Speak out for those who cannot speak, for the rights of all the destitute.
Speak out, judge righteously, defend the rights of the poor and needy.

Many of us may know about the superwife in Proverbs 31:10-31 — written from a man’s perspective– but less about the preceding nine verses which comprise the wisdom of a woman! She is the mother of King Lemuel, and apparently he remembered and wrote down what she had taught him.

This queen’s advice to her son calls for the wise use of power for the good of his people. In brief, it includes three things: 1) Don’t fool around (sexually) with women; 2) don’t get drunk; and 3) “defend the rights of the poor and needy.” In fact, over half of the text concerns treatment of the poor and powerless. “Speak out for those who cannot speak” (v 8). “Judge righteously” (v 9). “It is not for kings to drink wine. . .or else they will drink and forget what has been decreed, and will pervert the rights of all the afflicted” (v 5).

But advice from this mother is extraordinary not only because she is female but also because she is not an Israelite. Bauckham cites other sources to identify her as the queen mother of the Arab kingdom of Massa in northeastern Arabia. This text, then, provides a fine example of the international character of wisdom literature. By that I mean that it is not dependent on a special revelation from Yahweh and is not part of Hebrew salvation history, as is most of the material in the law and prophets of the Hebrew Bible. As an example of wisdom literature, Proverbs 31:1-9 teaches ethics of the sort that is available to all human beings regardless of their religious beliefs.

Nevertheless, Lemuel’s mother’s advice does dovetail with many biblical texts from the law and prophets, which are presented as coming directly from Yahweh. “You shall not pervert the justice due to the poor in their lawsuits,” asserts the legal material in Exodus 23:6. “Thus says the Lord,” thunders the prophet Jeremiah in 22:3, “Act with justice and righteousness and deliver from the hand of the oppressor anyone who has been robbed. And do no wrong or violence to the alien, the orphan, and the widow.”

Like much of the international wisdom literature of the time, part of the job description of Israelite kings was to have pity on the poor, weak, and needy, to redeem them from oppression and violence (Psalm 72:12-14). Our culture today does not have a monarchy comparable to King Lemuel’s, and we have institutional structures aimed at giving weaker members some voice in the political process to prevent the corruption of justice. Unfortunately, much in our political justice and tax systems today seem to be working against the needs of the less fortunate. Using an image from Lemuel’s mother, we see too many powerful corporations get drunk on their profits and “pervert the rights of all the afflicted.”

With the lack of adequate health care and child care, with over-priced and insufficient housing, with tax laws favoring large corporations and the disappearance of jobs providing entry to the middle class, it becomes harder and harder for working class people to move up the socio-economic ladder. Single mothers are especially hard-hit at a time when two incomes are almost a must in order to remain in the middle class. Adding insult to injury, a recent study by the federal General Accounting Office shows that women’s wages, which had been rising in relation to men’s, are once again dropping, now down to 79 percent of men’s wages.3

Does the church care about this? Is it paying attention to the more than 80 references to care of the poor in the biblical texts? The same weekend I was reading “Wisdom for the Powerful,” a surprising feature came on CBS’s Sixty Minutes. Ed Bradley interviewed Tim LaHaye and Jerry Jenkins on the growth of the Religious Right as a result of the astounding popularity of their “Left Behind” novels. The fictional aspect of these books faded away as they and their enthusiastic followers affirmed their absolute belief in the upcoming Rapture which they hope to experience in their lifetime. All you need is “a personal relationship with Jesus,” and then you will be secretly snatched up to heaven to avoid the horrific tribulations punishing the unbelievers left behind on the earth

Aside from its twisted, unbiblical foundation, and aside from the appalling sexism promulgated by the Religious Right and which pervades the “Left Behind” novels, this dispensational Rapture theology expresses no particular concern for economic justice. Although I don’t doubt that some individual fundamentalists work on behalf of the poor, their impetus does not come from their theology. Rather, LaHaye and Jenkins come across as exclusive, other-worldly, and future-oriented. Their major concern (besides making money?) is getting more people into the “salvation lifeboat” ready to fly away to heaven and leave the earth and the rest of humanity on the tribulation-laced road to hell.

What a far cry from biblical and international Wisdom literature like Proverbs 31:1-9, which expresses concern for ethical behavior in the here and now! In the spirit of this text, I happily affirm our conference theme of Wisdom calling at the crossroads and open gates of the world. And how appropriate to have a strong interfaith component among the planned activities. A passion for justice is shared by many feminists beyond the Christian faith, and we need to work with them “to speak out for those who cannot speak, for the rights of all the destitute” (v.8).

I do have a nagging unease, however. Biblical feminists have often expressed a concern for the oppressed and powerless in the world, most of whom are women and their dependent children. Yet it is probably true that some women who most need to hear wisdom calling at the crossroads of life will not be at our conference because they cannot pay for it. As income and educational gaps widen in this country, EEWC may have to more seriously reckon with women’s issues as they relate to economic realities.

1. Richard Bauckham is University Lecturer and Reader in the History of Christian Thought, University of Manchester, Manchester, England. The Bible in Politics is published by Westminster/John Knox, 1989. 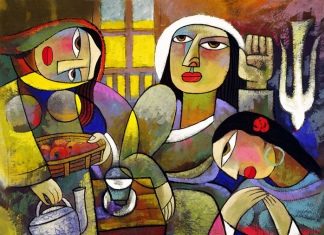 Ora et Labora (Prayer and Work): A Sermon of Mary and...

Editors
Women are forced to partake in ferocious competition for limited resources instead of being immersed in a faithful community where there is not only enough for all but in which all are valued.

Developing A Divine Feminine Version (DFV) of the New Testament