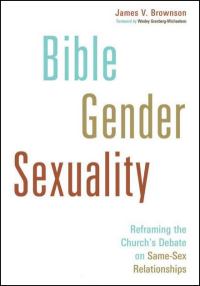 The debate in the Church over same-sex relationships has not only torn apart denominations, churches, and families, it has also fueled much of the debate in the public square, since people’s values on this topic are strongly influenced by religious systems. Although in both the church and in civic life, the tide appears to be shifting in the direction of greater equality for people in same-sex relationships, this debate continues to be divisive in both arenas. As a woman who was raised in a fundamentalist Southern Baptist home and is now a member of the LGBT community, I experience the tensions within this debate as deeply personal. So I was interested in seeing how this new book on the topic would be able to reframe the debate in something other than the usual rhetoric.

The author, James V. Brownson, is an ordained minister in the Reformed Church of America and is the James and Jean Cook Professor of New Testament at Western Theological Seminary. He had reached what he calls a “moderate, traditionalist position” on the subject of homosexuality through his initial study of the topic, but then something occurred that forced him to dig deeper; his teenage son came out as gay. This book is the result of that deeper study.

In an attempt to divorce his terminology from political designations that could add extra baggage to the discussion, Brownson suggests there are two primary stances on same-sex relationships. One is held by “traditionalists,” and the other by “revisionists.” He starts by analyzing both points of view and demonstrates the ways in which both sides fall short in their current arguments.

The “traditionalists” base most of their case on the notion that gender complementarity is a necessary part of marriage and argue that same-sex relationships are therefore invalid because they lack this trait. He demonstrates why this cannot be defended as necessary from the biblical text, removing the ground from beneath those who oppose same-sex marriage on these terms.

In reframing this debate, he devotes the second section of his book to tackling how an underlying moral logic that will frame sexual ethics throughout Scripture might be discerned. In this section, he specifically looks at the way the Bible addresses sexuality and marriage relationships, including the themes of patriarchy, marriage as “one flesh,” procreation, and celibacy. These chapters address these issues within the heterosexual context to tease out the place of each of these themes within the overall construction of a broad, cross-cultural version of Christian sexual ethics. There is much within this section that may be of interest to those outside of the LGBT community, particularly those who favor feminist, egalitarian understandings of what marriage can and should be.

Having developed the groundwork of this underlying moral logic with which to approach sexual ethics, he spends the third section of the book exploring the “boundary language” of Romans 1:24-27 in great depth. His purpose is to thoroughly analyze what behavior Paul is truly addressing here. He uses linguistic and textual analysis, along with the study of other writings of that time, as he examines such concepts as lust and desire, purity and impurity, honor and shame, and natural and unnatural.  What were Paul’s underlying concerns here as he used this language in the passage? In every case, Brownson demonstrates that the issues being referred to in this Romans text are not addressing same-sex marriage as we know it today but are instead further confirmations of the sexual ethics laid out in the previous section.

In his concluding chapter of the book, he reviews the other texts in the Hebrew Bible and the New Testament that reference same-sex sexual relations, viewing them through the lens of the sexual ethics he has established, and demonstrates that these texts also do not apply to same-sex marriage as we know it today.

While his final conclusions wind up on the “revisionist” side of the debate, he reached that point via the construction of a carefully considered moral logic that frames a sexual ethic from all of Scripture.  He claims that by grounding his approach to same-sex relationships in this way, he provides a rationale that was previously missing.

I am not sufficiently well-versed in the literature within this field to evaluate how this contribution adds to or overlaps with the scholarship already available. I did, however, find that this book helped me to better frame my own understanding of marriage and sex on a solid Scriptural foundation, giving me greater confidence in being able to argue against the ingrained patterns and expectations of my childhood faith tradition. Although this book is not light reading and requires some concentration and focus to read, it is not drudgery either. Brownson lays out his arguments in a logical, sequential fashion that is easy to follow, often referring back to previous points to clarify how each new argument fits with what has already been covered. He also includes a helpful bulleted summary at the end of each chapter to highlight the main points in a succinct way.

If you would like to move into a deeper understanding of sexual ethics and marriage via the construction of a broad, underlying moral logic that can apply cross-culturally and across gender configurations, this is a helpful and timely book. Likewise, if you are trying to deepen your grasp on the debate over same-sex relationships and want to be able to construct a deeply coherent framework on which to base your views, this book carefully considers all of the traditional arguments while also reframing them in a powerful way.