The Gospel of Sophia, Volume I: The Biographies of the Divine Feminine Trinity
By Tyla Gabriel, N.D.
Published by One Spirit, LLC, 2014.
8×10” paperback, 426 pp. 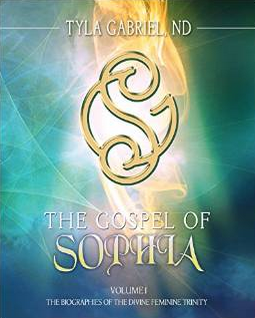 Tyla Gabriel, a certified naturopath and lifelong student of religion, mythology, and philosophy, combines all of her interests to provide the world with an introduction to Sophia Christos.  She claims to have learned about the Being of Sophia through living “Imaginations” that were given to her by spiritual beings over the course of many years.  She also provides a bibliography of more than 100 works that have guided her vision, most particularly the works of Rudolph Steiner.

Gabriel explains that her goal is to provide “a Gospel of Good News to assist the aspirant on the path of immortalizing the Goddess within” (p. 386).  She also promises a second volume of “completion stages” for the use only of “serious students and initiates” (p. 403).  Since each person is a microcosmic trinity of thinking, feeling, and willing, we are in need of understanding the “most Holy Trinosophia—the Great Goddess of birth, death, and resurrection… the Mother of All” (p. 386).

Gabriel released her book during the winter solstice of 2014, “exactly two years after the end of all known aboriginal calendars” (p. 395).  So her Gospel of Sophia announces a “New World Pentecost” in which humankind (ready or not) is being “pulled across the threshold between the physical and spiritual worlds,” toward a “direct experience of the Etheric Christ,” which is “the new voice of Sophia Christos” (p. 395).

Gabriel argues that there are not one but two trinities, Male and Female, that work together, with the Father as the Ground of Being and the Mother Goddess together giving rise to a Son of God and Daughter of the Goddess who descend from heaven to earth to experience and redeem the human condition (p. 300).  In turn, they give birth to Love and Wisdom.  Separate and yet united, they are the Sophia Christos, “marrying the purified soul to its higher spiritual self” (p. 300).

For Gabriel, Sophia is a threefold Goddess who rules the past, present, and future.  As the sevenfold Goddess, she rules time and the planets in the solar system as well as the seven organs in the human body.  And as the twelvefold Goddess, She is the collective consciousness of humanity, guiding each aspiring person through “twelve steps of learning” what Gabriel calls “the spiritual script, or language” (p. 392).  Thus, the Trinosophia is “the Mother (Creatrix), Daughter (Spirit of Wisdom), and the Holy Spirit (Collective Consciousness of Humanity)” (p. 16).

For me as an individual biblical feminist, Gabriel’s book contains many esoteric details that do not feel necessary to a mind like mine, which prefers simplicity and directness.  And I am rendered very nervous by what sounds like a cavalier repudiation of lesbian, gay, bisexual, and transgender experience: “Through medical operations, humans can play god and change their gender.  Through preference, humans can change their physical desires into any aberration that the ego can devise.  These factors do not affect the feminine characteristics of the soul or the masculine characteristics of the higher self” (p. 203).  On the contrary, the Bible has convinced me that God is Spirit and we human beings are extensions of that Spirit.  Furthermore, Spirit is neither male nor female and/or both male and female.  So I do not need a gender hierarchy that supports the inaccurate binary gender construct.  (For more on that topic, please refer to my book Omnigender: A Trans-Religious Approach).

For me, the most helpful part of The Gospel of Sophia is the one in which Gabriel supplies quotations about the Divine Feminine dating from 2100 B.C. to 1987 C.E.  These quotations illustrate the Goddess as originally the sole creative deity, followed by a gradual takeover of her power by a masculine deity, and the current reawakening to a Sophia that is Beauty without limitations (see “Selections from Herstory,” pp. 305-374).  We can only hope that Tyla Gabriel is correct in predicting a new world that honors Sophia, the Holy One envisioned in the form of womankind.  Only a matriarchal vision to balance the centuries-old patriarchal vision will teach us to insist on justice for women as well as men, girls as well as boys, and gender in-betweens of every kind.

Leaving Church: A Memoir of Faith