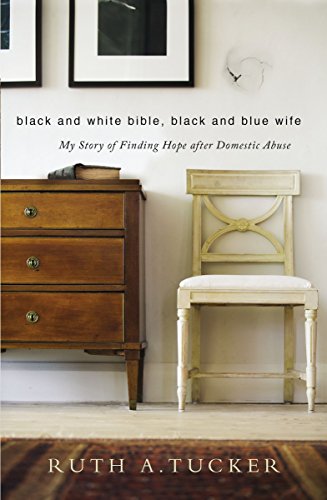 By the time I had read about two-thirds of Black and White Bible, Black and Blue Wife, I had mentioned it to several people in discussions about gender equality, domestic abuse, and evangelical theology. Ruth Tucker, author of nineteen other books on theological topics and a former professor at several seminaries and Bible colleges, writes in this book for the first time her own story of violence at the hands of her pastor ex-husband. She interweaves her personal experiences and those of other women with research-based analysis and biblical hermeneutics, contrasting the male headship model with a model of mutuality in heterosexual marriage within a Christian, mostly evangelical context.

The stories of physical, sexual, and verbal abuse within Tucker’s marriage are horrific, despite her statement that she has left out some of the more graphic details. At times, she inserts journal entries from the nineteen years of her marriage leading up to her escape with her thirteen-year-old son. Tales of the domestic abuse of other women include rape, wife-spanking, and marriages that ended in murder.

Tucker’s research includes a study from her small denomination, the Christian Reformed Church, that uncovered the fact that in this evangelical church, one in eight women had experienced physical abuse or neglect, while one in five had endured emotional abuse. Twenty-eight percent of respondents had been subjected to at least one of those three types of abuse (p. 95).

Historically, men have been permitted by law to abuse their wives under the aegis of privacy in the home. Tucker points out that, today, this argument carries “far less weight—except [italics mine] among religious subcultures, including some conservative evangelicals” (p. 104). She also reports on abuse in cultures outside the United States or with roots outside the U.S. in a chapter titled “Standing Against Cultural Misogyny.”

What caused me to mention the book in diverse settings with diverse people is how religious subcultures that condone violence against women base their positions on their scriptures or holy writings, whether Christian or otherwise. Tucker offers a balanced perspective when she says she would never deny that the Christian headship model, also referred to as the complementarian model, is a valid way to interpret the Bible. However, she states unequivocally that she does “not believe it is the most faithful interpretation, particularly in light of the central themes of Scripture” (p. 23). Tucker’s ex-husband repeatedly insisted, as he threw her to the floor or against kitchen cabinets, that she acknowledge him as head of the household.

Tucker’s hermeneutics are thoughtful and thought provoking. She questions why a husband would beat and terrorize his wife, and answers, regarding her ex-husband, “his perspective on male supremacy and on female submission was front and center” (p. 22). She exegetes the most often referred to verses on headship from Ephesians 5, pointing out that the phrase, “‘wives, to your own husbands’ has no verb in the original Greek” and thus “cannot be read without the topic sentence of mutual submission” (p. 46). In fact, considering the number of words addressed to husbands, she suggests that the greater burden of submission is placed on the husband (p. 47).

The author also addresses, within a modern cultural context, the curses laid on Adam and Eve as they are ordered out of Eden that are often used to support male headship. She says that complementarians have assumed that the curse placed on Eve and her descendants is for all time. Adam’s curse has been alleviated by modern farming methods. The corollary is that modern legal statutes have relieved the gender inequality of Eve’s curse (pp. 43–44). The implication is that our current context may influence how we interpret the passages in Genesis. As Tucker points out so powerfully, “the most profound way we exegete Scripture is through our lives” (p. 26).

The book, because it is about how Scripture is used to bolster male superiority and justify domestic violence in heterosexual marriage, naturally does not address issues of domestic violence in same-sex relationships. Nevertheless, there were a couple of instances of heteronormativity not required by the author’s focus. Tucker asserts that “strong and wise fatherhood is critical for healthy families” (p. 66), which negates both her own successful rearing of a healthy son as a single mother and families with two lesbian parents. She also claims, “More than anything else we are either male or female” (p. 71), thereby denying the existence of gender-fluid and intersex people.

Black and White Bible, Black and Blue Wife is, however, an important call to biblically supported mutuality in heterosexual marriage. It is replete with challenges to interpretations that have long supported the male headship model. The final chapter presents an exemplar of mutuality in marriage based on Tucker’s second marriage, which is presented not as perfect but as a down-to-earth example of love like that between Christ and the Church. Further, in a pointed afterword, Tucker poses a series of meaty questions—among them, “Who determines if [a husband’s] headship is actually comparable to the headship of Christ? The husband himself? Is he the referee, the umpire, in his own ball game?” “How do boys and single men prepare to rule a wife?” “How do girls and young women prepare for submitting to their husbands?” “How should boys and men respond to female ‘headship’ of teachers, corporate managers, a police officer, a wife who is a police chief?” These questions go unanswered but are by no means presented as rhetorical and offer food for thought and discussion.

A Tiny Little Girl and a Smiling Man – #YesAllWomen