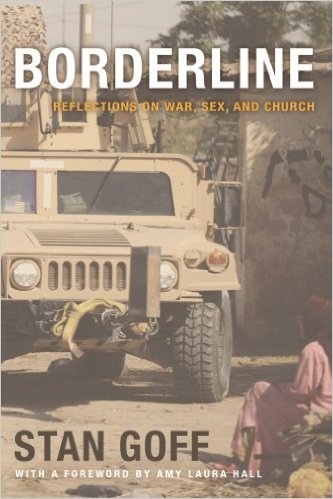 About 30 years ago, I assigned a short story to a literature class. The story was narrated from the point of view of a Muslim woman, and when we began to discuss it, a young Muslim man raised his hand and said, “Before I read this story I never realized that a woman had a point of view.”  There was a collective gasp, so I hastened to congratulate the student for having the courage to admit he’d learned something so basic.

For years thereafter, I thought that this incident had illustrated something important about Islamic culture.  But after reading Stan Goff’s Borderline, I’m not so sure my student was speaking exclusively about Muslims.  According to Goff, many men who’d learned to be “genuinely masculine” would feel surprised to be confronted with a woman’s clear, strong, and rational point of view.

Since the second century, Christian patriarchs have depicted women as “embodiments of inexhaustible negativity” (p. 64), with emotions that drive them toward every evil, “just as reason impels men toward all good” (p. 67).  And although churchly and cultural practices have shifted over the centuries, women’s exclusion from the priesthood and subordination to men have remained constant (p. 66).  So why should an honest young man in any religion expect to find a solid and sensible point of view in the average woman?

The goal of Borderline is to tell the story of how the Christian church allowed itself to be “diverted by power,” most particularly through the agencies of war and sex.  “Whether we are looking at the Constantinian compromise or the Crusades or the witch trials or the Reformation or the wars of modernity, we will see again and again how the church has been pulled away from the Gospels by the material and cultural potency of the principalities and powers” (p. 3).

Stan Goff is the perfect person to examine the effects of militarism on male sexuality, male dominance, and female subordination.  He spent over 30 years in the most highly trained, elite branches of military service, in Vietnam, Panama, East Asia, Africa, and elsewhere.  He burned houses, killed the livestock of poor farmers, maimed people, exploited prostituted women, and took human life (p. xvii).  In return, he was held in the highest esteem by his fellow citizens, as part of the near-idolatry Americans offer to their veterans.  And the deepest truth he learned was this: “Warriors must have the ability to see others as mere objects and to do what psychologists call compartmentalizing.  Commanders of Nazi death camps could still be good family men” (p. 79).

Readily admitting that as a military combatant he killed people, Goff writes that “much combat is outrageously one-sided and therefore akin to plain murder” (p. 112).  And he gratefully admits that it was feminist theory that drew him away from his perverse masculinity and toward the pacifism of Jesus.  Repeatedly Goff quotes Jesus’ words as recorded in Luke 7:43: “Turning toward the woman, Jesus said to Simon, ‘Do you see this woman?’.”

Learning to see women in their fleshly embodiment with their own point of view is the only way to overcome the current Western five basic rules for being masculine: 1) do not be like a woman; 2) be successful; 3) be aggressive; 4) be sexual—usually including objectifying women; and 5) be self-reliant (p. 37).  Even when people use gender-neutral language, they assume that objectivity is masculine.

And Goff is pleading for something far more embodied than abstractions about “rights.”  He objects, as I do, to phrases “like The Divine Feminine… which reinscribe notions of some free-floating feminine essence” (p. 404).  My 1983 book was titled The Divine Feminine by my publisher without my permission: my own title was simply Biblical Imagery of God as Female.

Instead of abstractions, Goff wants to see actual dismantling of boundaries, the destruction of the “conquering male,” and Christian men who listen to their sisters and enter into “full communion with them” (p. 413).

Goff minces no words when he defines the major challenges we face today.  War, for instance, is “violence organized for collective domination,” and “domination is central to our overall discussion of war, church, and masculinity” (p. 231).  War is simply “an act of violence to compel our opponent to fulfil our will” (p. 233).

Eugenics involved “prevention of reproduction by people whose progeny would, in all probability, be of no value or injurious to racial stock” (p. 336).  American eugenics was much admired by Adolf Hitler, just as Hitler’s eugenic policies got accolades from American eugenicists.

Love involves fusion, which Goff describes as “I-am-yours-and-still-me-and-you-are-mine-and-still-you.  Buber calls this the I-Thou relation.  Jesus and St. Paul called it love.  Fusion presupposes permeable boundaries” (p. 246).  But beware: “the derogation of the female side of the polarity leads to a hardening of the opposition between male and female” (p. 246).  Of course!

To me the most challenging section of Borderline is its discussion of liberal law, which tends to conceal and reproduce power inequalities behind abstractions about political equality (p. 224).  Anatole France brilliantly captured this problem by writing, “The law, in its majestic equality, forbids rich as well as poor from sleeping under bridges, begging in the streets, and stealing bread” (p. 224).  So we who argue for male-female mutuality and the joy of healthy sex must be careful not to hide or deny that gender is a historically evolved sexual inequality that has existed prior to and despite the operations of the law.  Women still make about ¾ of what men make in the United States, and racial issues make the injustice even worse.  Bodies matter!  Income matters!  So if we fail to account for material inequalities when we praise healthy sex between “legal equals,” we may be driving some people toward despair.

The United States is not only a capitalist state; it is also a male state (p. 225).  Concrete inequalities (power inequalities) do not dissolve by being defined as matters of nature or privacy, as if we have no power to intervene.  As Anatole France clarified, [Alena’s note: I added the open quotes here, I think they are accidentally missing from the handwritten manuscript] “freedom can only apply meaningfully to the people who already possess the materials means to exercise those freedoms” (p. 225).  For that reason those of us who believe that Christianity needs a more respectful attitude toward sexual diversities must include some redistribution of wealth within our circle of concerns.  We must be careful to support the political systemic changes that will empower women and nonwhites and people with disabilities and all other barriers to a fully embodied equality.

When I began teaching in a Christian college some 63 years ago, my students were enraptured by the individualist philosophy of Ayn Rand, and I tried to understand what attracted them so utterly.  Eventually I realized that the fundamentalism we had all been raised to believe had emphasized individual acts as if they alone could overcome the structural injustices that had forced many human beings to live in poverty and on the margins.

“Women in male-dominated societies are left with fewer reasonable choice in the face of structured male power.  [And many] men fail to recognize that women are born into a system of scarcity [because of] male supremacy that leads them to see other women as antagonists…” (p. 397).  Such facts should not be forgotten by anyone who is attempting to bring genuinely divine incarnation into sex among Christians—or, for that matter, among human beings in general.

The language we use “shapes [our] categories of thought and defines the boundaries of imagination” (p. 358).  So Goff is right to strip away the hero glow that surrounds the military, since war degrades soldiers and debases masculinity into heartlessness.  Borderland is difficult reading, especially as Goff leads readers through four thousand years of history in order to prove his point that “sex is… often about hostility, cruelty, and humiliation” (p. 6), but that finally “love can… redeem sex from power” (p. 7).

Goff provides more than 380 scholarly items in his bibliography, as well as an index of names and one of biblical references.  All in all, I agree with Stanley Hauerwas that Goff helps his readers “see war as an expression of a perverted masculinity,” and with Justin Barringer that Goff successfully proves that “the only thing that Jesus was, and is, interested in conquering is death.”  Above all, I agree with Amy Laura Hall that “Stan Goff has written a love letter of hope for those who are trying to hold fast to Christian feminism, or Christian pacifism or… just plain Christianity” (p. xii).