Home FAQ Blog How can feminists stay in a religion that is so patriarchal and... 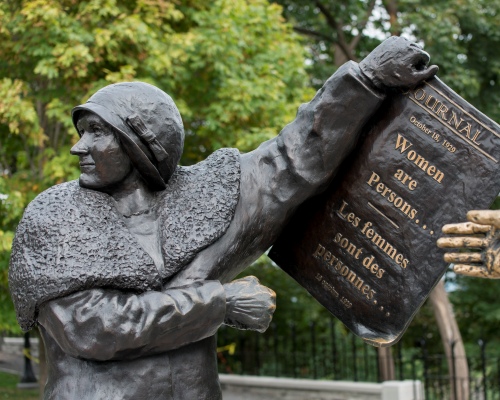 Although gender is obviously not an issue with God, Jesus, who we affirm as the Christ of God, the “Son “ of God in many Scriptures, was born male.  He was also born Jewish.  He was also Middle Eastern, so probably had darker skin and darker eyes.  He was born, lived and died in a small area off the Mediterranean.  None of these specifics have any more godliness than any other, none are more normative, none indicate superiority.  That is, Jesus’ maleness as a human is no more fundamental to his work for God and humankind than any other specific aspect.

The male disciples are another specific to the culture and time that Jesus lived, and in which the writers wrote.  If we read carefully, there are many female followers and friends of Jesus, including women like Mary of Magdala, and Mary and Martha of Bethany.  Many details are left out of the story of Jesus that modern biographers would include.  Again, these facts and descriptions are neither prescriptive of who are the “right” or “best” followers of Jesus, nor of the other being wrong.

Feminist women, both Jewish and Christian, have reexamined every book of the Bible and discovered that in many cases it’s the traditional male interpretation that is harmful to women, not God’s Word itself.  In other passages, we need to understand the cultures in which the Bible was written and question whether social customs of two thousand years ago were intended for women and men today.

The truths about how we can relate to our Creator and about the good news of Jesus are still valuable in our lives in the 21st century.  All humans face profound questions: Why are we here on earth?  Is there a God?  What is the meaning of life?  How can we face death?  The Bible helps us find answers to these questions, and women who want equality have as much interest in these issues as anyone else.

The Maker of heaven and earth is not male, though Christians speak of “the Father, the Son, and the Holy Ghost.”  The problem is our language, and we feminists are working to change that.  Yes, Jesus was male—though some scholars wonder whether parthenogenesis was the means by which God achieved the virgin birth.  (In that type of conception, Jesus would have been a chromosomal female; only his phenotype would have been male.)

Feminists have reflected on why the “immortal, invisible, God only wise / In light inaccessible hid from our eyes” would chose a male body rather than female body for incarnation on Earth.  Our answers are similar to Virginia Woolf’s answer to the question of why literary history records no woman of genius equal to Shakespeare.  She imagined what would have happened to a woman of genius in Shakespeare’s time, and we can ask what would have happened to a female messiah in the culture of the first-century Israel.

Christian feminists are content that Jesus broke many gender barriers and called both women and men to discipleship equally.  For example, when a woman in a crowd called out to him with the words, “Blessed is the womb that bore you and the breasts that nursed you!” he answered, “Blessed rather are those who hear the word of God and obey it!” (Luke 11:27-28).  He affirmed Mary of Bethany for choosing to sit and listen to Jesus rather than prepare food (Luke 10:38-42).  He discussed theology with a woman he met at a well (John 4).

Were there only twelve disciples, all of them men?  The Gospel According to Luke tells us that when Jesus traveled about proclaiming the good news of the kin-dom of God, “The twelve were with him, as well as some women who had been cured of evil spirits and infirmities: Mary, called Magdalene, from whom seven demons had gone out, and Joanna, the wife of Herod’s steward Chuza, and Susanna, and many others, who provided for them out of their resources” (Luke 8:1-3 NRSV).

Thus there were many women following Jesus, three of whom were so important that they had to be named.  These women provided the financial support for his ministry and perhaps made the arrangements for food and housing for the whole entourage.  Thus the problem of “the twelve disciples” again becomes a product of the patriarchal culture that valued and reported male disciples more prominently than women, and that valued the number twelve, representing the twelve tribes of Israel.

To learn more about the women following Jesus, we go to scholars like Elisabeth Schussler Fiorenza, who says that “… androcentric biblical texts not only reflect their patriarchal cultural environment but also continue to allow a glimpse of the early Christian movements as a discipleship of equals.”

“How Can Jesus Save Women?  Three Theories on Christ’s Atonement” by Reta Halteman Finger in The Wisdom of Daughters: Two Decades of the Voice of Christian Feminism (Philadelphia: Innisfree Press, 2001).

“Toward a Feminist Critical Hermeneutics” in In Memory of Her: A Feminist Theological Reconstruction of Christian Origins by Elisabeth Schussler Fiorenza (New York: Crossroad, 1985).

A Room of One’s Own by Virginia Woolf  (New York: Harcourt Brace Jovanovitch, 1929).

“Ammunition for Repression: Misuse of Scripture in the Past” in Woman Be Free: Biblical Equality for Women by Patricia Gundry (Grand Rapids: Zondervan, 1977).

She Who Is: The Mystery of God in Feminist Theological Discourse by Elizabeth A. Johnson (New York: Crossroad, 1992).