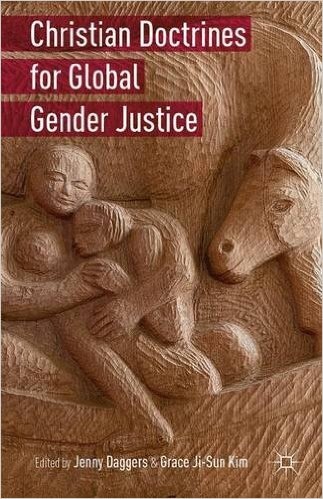 My first exposure to feminist theology took place in a class on systematic theology, where the well-established patterns were central to “right thinking” and “new” inquiries were relegated to the periphery. Feminist theology was just one example of how far off course theological reflection could go if “objectivity” no longer held its well-respected post.

That was over fifteen years ago, and while feminist theology is now recognized more widely as one illustration of how context affects one’s thinking about God and the world, much spade work must still be done for a full-fledged re-visioning of the interplay between context and theology to emerge.

Using as their starting point the troublesome idea that “Christian doctrines and global gender justice rarely appear together in the same sentence” (p. 1), Christian Doctrines for Global Gender Justice delivers what its title suggests. Jenny Daggers, Associate Professor of Christian Theology at Liverpool Hope University, U.K., and Grace Ji-Sun Kim, Associate Professor of Theology at Earlham School of Religion, U.S., extend the conversation they started with their first volume, Reimagining with Christian Doctrines (Palgrave Macmillan, 2014). The result is a highly engaging and informative attempt to sustain theological reflection in a systematic sequence while also honoring very different contexts, including those of the readers.

Systematic doctrines covered in the book include God, the cross, redemption, the Holy Spirit, eschatology, the imago dei, and free will. Each examination, however, does not begin with terminology void of context but, rather, invites reflection from the perspective of lived experience. So, for example, in Loida I. Martell-Otero’s essay on God, she concludes that “an evangélica reimagining of the doctrine of God shifts the conversation from speculation about the what-ness of God to the where-ness of God” (p. 31). Such shifting derives from a context years and lands away from the earliest church theologians, whose lives were framed by privilege, an insight taken for granted as objective until recently.

Grace Ji-Sun Kim’s essay on a theology of hope takes as its beginning her context as an Asian American woman. She writes that a liberating theology cannot simply “just accept what has been passed on for generations within the church and apply it within our own lives, which are so distinct from those of the dominant white society” (p. 98). Instead, the doctrine of hope, she says, within the Asian American Christian women context is to fully participate in the reign of God by advocating for change: changing stereotypes and racism; changing female subordination and patriarchy. In the midst of “devastation” and “corruption,” hope is the potential for change.

Linda E. Thomas connects the doctrine of the Holy Spirit with Black women’s experiences in America, experiences based in the history of slavery. Thomas points out that the idea of the Holy Spirit resonating with enslavement is a powerful motivator for resistance. She writes, “what is clear is that through the Spirit, some enslaved women found life through death—even death of their children. . . . It was at that moment of recognition of their agency that the Spirit met them to share in their brokenness. In that brokenness, in that vulnerability, there was freedom and power because the Spirit met them and they were renewed to continue the struggle, with God among them” (p. 84).

Other insightful reflections include “The Green Cross” (the idea that we must be at work rehabilitating our environment because the cross itself points to life) by Sigidur Gudmarsdottir and “Ecological Evil, Evolution, and the Wisdom of God,” by Hilda P. Koster, where “God’s love is a tough love that is not for the faint of heart” (p. 67). The list of contributors—from Amy Carr to Mary McClintock Fulkerson to Cynthia L. Rigby—points to the need for and quality of this book.

From the four walls that defined the space where I first gained exposure to feminist theology largely as a project to be rejected, to my later years as a feminist Christian, a university professor, and a writer, my understandings of systematic theology have shifted dramatically. From my earliest forays, when it was detached and therefore didn’t seem to apply to me, a woman relegated to the Christian margins, to reading a volume such as this, where theological reflections are centered in lived experiences, especially experiences of those at the margins, theology has changed dramatically.

Christian Doctrines for Global Justice is an invitation to a theology journey where investigations are not for the faint of heart, nor for those whose reflections have no correlation to experience. Indeed, it is impossible to read the essays in this book and not have an epiphany (or many, more likely) that changes how one lives or understands God’s work in the world.

As Jenny Daggers and Grace Ji-Sun Kim note, this is an imaginative adventure that will birth ever-increasing circles of Christian doctrines for global justice.