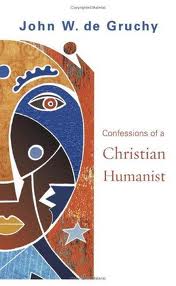 Back in 1967, I subtitled my first book A Christian Humanist Approach to Knowledge.  I had recently finished my Ph.D. studies, during which I had been profoundly influenced by the great Renaissance Christian Humanists such as Erasmus, Sir Thomas More, and above all John Milton.  At the time I had been teaching in fundamentalist colleges, with their distinct bent toward anti-intellectuality, and I was concerned to defend the pursuit of classical and “secular” knowledge as a vital and honorable calling for Christian students.  Now, almost 40 years later, I am working on a revision of Sensuous Spirituality to be published in the Fall of 2008, and I am planning to give it a new subtitle: A Christian Humanist Perspective on Sex, Gender, and the Deeper Life.  So when Letha Scanzoni suggested that I might review Confessions of a Christian Humanist, written by one of our most distinguished contemporaries, I welcomed the opportunity.

John Wesley de Gruchy is a leading scholar of Dietrich Bonhoeffer, so he is fully conversant with the struggles of German Christians as Hitler was coming to power.  And as a professor at the University of Cape Town, de Gruchy lived through the years of apartheid and the struggles of the South African Council of Churches as well as the first democratic elections, the making of the Freedom Charter, and the rise of the Reconciliation Movement.  If ever there was a man equipped to comment on the importance of Christian Humanism for the Third Millennium, it is this man.

Here is what de Gruchy emphasizes:

The opponents of the Confessing Church in Germany were not secular humanists or communists, but Christians who had capitulated to Naziism; just as in South Africa, those charged with the heresy of apartheid were not people outside the church, but insiders  —  those who, in the name of Christ, perpetuated what was contrary to the gospel.  In other words, a true confession of Christ is not for the sake of demonstrating doctrinal purity, to show whether or not you are “sound,” but for the sake of the well-being of the world.  To surrender the truth of the gospel, to deny Christ, meant denying humanity, denying the victims of Naziism and apartheid.  To affirm the truth of the gospel, by contrast, meant affirming humanity, expressing solidarity with the victims of injustice, and affirming the good and great in culture, and thus standing with those secular humanists who stood for the same values. (Pp. 183-4)

I wish these insights could be lodged in the minds and hearts of every Christian in the world— especially the religious and political leaders.

De Gruchy was a member of the Rondebosch United Church in the 70’s and 80’s, when the congregation began to identify itself with the anti-apartheid movement.  On two different occasions the pastor, Douglas Bax, walked past groups of fully armed soldiers and police who had surrounded the church, and in their presence ripped from the front door the proclamation that the building could no longer house meetings of the liberation forces or provide a home for conscientious objectors.  I tremble inwardly at the thought of how much courage it would take to do such things!  And now, in the post-apartheid period, this same Rondebosch United Church continues to support anyone ostracized by society or other churches: street children, domestic workers, refugees from Rwanda and elsewhere, gay people, prisoners.  Furthermore, many of the more “conservative” white members have remained in fellowship, at times unsettled but always enriched: “evangelism by those formerly excluded [leads] to the humanization of those who have been privileged” (p. 171).  Out of all this concrete experience grows de Gruchy’s definition of a genuinely Christian church: “an institution in which people are enabled to be truly human, truly themselves, in Christ” (p. 170).

De Gruchy explains early on that his book is a “sharing of some perspectives on being human and Christian” drawn from his own experience and reflection “after more than 30 years of teaching on the boundaries of theology, religion, and the human and social sciences, and many more years of Christian ministry.”  When de Gruchy reached the mandatory retirement age of 65, his friends and former students urged him to tell the story that had led to his conviction that “being a Christian is about recovering our humanity” and also to elaborate on his understanding of “what it means to be a Christian Humanist” (p. 4).  The result is a strongly convincing, extremely interesting combination of autobiography, introspection, and explanation of often-misunderstood concepts.

For de Gruchy, the theology and life of Desmond Tutu is a perfect encapsulation of what Christian Humanism is all about.  De Gruchy summarizes the Christian Humanist credo in the following six concepts:

A delicate balance must be carefully maintained between the Christian faith and the humanism:

For Christianity to be Christian it cannot by-pass St. Paul’s confession of Christ crucified as “the wisdom of God,” for it would have nothing distinctive to contribute to the humanist project.  But for it to be humanist it cannot ignore the truth wherever it is to be found, for all truth ultimately reflects the beauty and goodness of God. (P.177)

How well I remember trying to embed these ideas in my students’ minds during my early teaching at Bob Jones University, Shelton College, and Nyack Missionary College!

For me, one of the most valuable aspects of Confessions of a Christian Humanist is de Gruchy’s candidness about pacifism and “the counter-violence of the oppressed.”  De Gruchy never uses the latter phrase, but I am using it because it has been helpful to me in grasping why basically pacifist leaders like Dietrich Bonhoeffer and Nelson Mandela could turn to the use of violence in extreme circumstances, Bonhoeffer by participating in a conspiracy to assassinate Hitler, Mandela by leading an armed struggle for liberation.  De Gruchy himself holds pacifist beliefs, has had warmly positive relationships with Mennonite peace churches, and is now living on a Moravian farm near Cape Town that has evolved into the Valmoed Community, dedicated to human healing, reconciliation, and renewal.  Yet his admiration of Bonhoeffer and Mandela is strong, although there is a Freudian slip in his index that may reveal a continuing internal conflict: the listings concerning Nelson Mandela omit the reference on p. 148, the only spot where Mandela’s turning to “the counter-violence of the oppressed” is mentioned.  Ultimately, however, de Gruchy seems to agree with Bonhoeffer’s “ethic of free responsibility,” meaning that “in some situations [such as resistance to Hitler’s savagery] Christians would have to make decisions that were not ‘pure and undefiled,’ but necessary if they were to be responsible” (p. 149).  I remember that when I was teaching at Nyack, the senior class “will” awarded me a box of crayons in various shades of gray — a memory that assures me that during the mid-60’s I was indeed trying to convince students of something similar to Bonhoeffer’s ethic of free Christian responsibility.

De Gruchy drives home the timeliness of his insights by comparing the rhetoric of the contemporary Religious Right to that of Nazi Germany and apartheid South Africa.  Anything that suggested a humanistic concern was described as anti-Christ and the enemy of Germany and South Africa.  “’Leberalisme, kommunisme, en humanisme’ was the war cry that prepared the ground for Naziism, Fascism, and apartheid” (p. 79).  What a warning to us today, when the rhetoric against immigrants, poor people, and lesbian, gay, bisexual, and transgender people has become even nastier than in the 80’s!

Because it is so readable, timely, and important, Confessions of a Christian Humanist is ideal for discussion in reading groups and adult education classes.  I am grateful to John Wesley de Gruchy for writing it and to Fortress for making it available to readers here in North America.

We Need to Talk about David Haas