Home Book Reviews Convictions: How I Learned What Matters Most 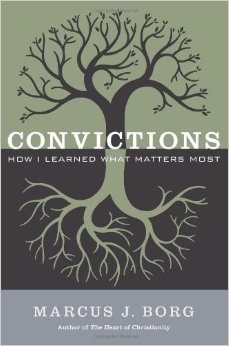 “If we aren’t going to talk about our convictions —what we have learned about life that matters most— at seventy, then when?” asks Marcus Borg in this, his latest book (p.2). On the occasion of his seventieth birthday, Borg shares from both his spiritual experiences and his intellect what he considers to be the deepest truths of Christian faith—truths urgently needed in the 21st century world.

Borg writes with his usual incisive style, contrasting and defining elements of Christian history, theology, and current observed trends. The difference here is that the context for his reflections is his own faith journey that took him from the conventional, churched family life of Middle America in the mid-20th century, through personal spiritual experiences and an awakened intellect, to the convictions  that now form his mature and vital faith at the beginning of this 21st century.  Frederick Buechner notes that Borg “writes with a simplicity that is never simplistic.” I found this to be very true; the book is inviting and readable, moving along engagingly, yet bringing surprise moments when suddenly the full depth and insight of what he’s just said jumps out and grabs the attention in an especially powerful way.

Borg says, ”The story of my life and my Christian journey is about memories, conversions and convictions.  Memories: of what I absorbed growing up. Conversions: major changes in my understandings of the Bible and God and Jesus and what it means to be a Christian. Convictions: the affirmations that have flowed from these changes” (p.19). Some of his convictions, spelled out in the latter part of the book, are familiar from his other works, although are newly told in the context of his journey.  All through the book, his deep faith and vital relationship with God shine out, even as he describes very “progressive” views.

He summarizes his conversions as intellectual (and also religious), political (and also religious) and spiritual. From the “precritical naiveté” of accepting the churched life of his young life and the atmosphere around his family in a Midwest farming community, he describes the questions that arise as the brain grows and knowledge expands through exposure to a wider world, education, and the development of critical abilities.  Reconciling faith with these new thoughts and ideas is a task of our emerging “critical thinking,“ and he wonderfully describes the process of questioning what we were taught and then making new decisions for ourselves.

Going on in the process and journey of faith development, he arrives at ”postcritical affirmation,” where the metaphorical and symbolic religious truths of scripture become so much more than mere factuality. This is an occasion to discuss the fundamentalist religion that results if this transition isn’t made.

Borg also describes, or attempts to describe (as he admits words become inadequate here), certain mystical and unitive experiences that filled his soul with the glory and interpenetration of God in all things.  This realness, this “more,” this ”isness,” which he names as panentheism, is foundational to his apprehension of the mystery of God, the basis of his passion for justice and righteousness.

The convictions he shares comprise the rest of the chapter titles:

Along the way is a good discussion of mysticism, a deep apprehension of Amos and the prophetic tradition regarding social justice and national political positions, an analysis of biblical literalism as a post-reformation phenomenon, and a rousing call to share the courage of our forebears as we participate in God’s passion for a different kind of world in the here and now.

On a personal level, I pray that all believers come to the convictions that he describes.  At the same time, I was anticipating more of an autobiography or memoir— life-story material with a touch on the convictions. However, this book, while rooted in personal faith, is more centered in the convictions themselves, as per the title (duh).

Church people have a wide variety of responses to Borg’s writing. I’ve led Sunday school classes on another of Borg’s books, Speaking Christian, which contains some of the same theological points, and in the one class I heard these contrasting reactions: ‘”Yes! Finally! A book that can save Christianity for me!” and “I started crying in the first chapter and wondered if he was a Christian.” Borg is upfront in his criticisms of fundamentalism and the (shallow) unexamined assumptions of popular Christianity, viewing these approaches as unbiblical. He’s obviously and unashamedly in the progressive camp, to the delight of many and the consternation of others. His concise and ordered way of doing theology gives me words and concepts to better explain moves I’ve made in my own faith and theology.  I was also pleased to read about his mystical experiences, which adds another dimension to his obvious critical abilities.

Two Books by Eric A. Seibert on Violence in Scripture