“I give thanks to God always for you…in every way you have been enriched in Christ Jesus in speech and knowledge of every kind…you are not lacking in any spiritual gift…” (1 Cor 1:4-7)

Compare this text from Paul’s Corinthian letter with what follows in 3:1-4:

“And so, brothers and sisters, I could not speak to you as spiritual people, but rather as people of the flesh, as infants in Christ. I fed you with milk, for you were not ready for solid food. Even now you are still not ready, for you are still of the flesh. For as long as there is jealousy and quarreling among you, are you not of the flesh, behaving according to human inclinations?” (NRSV)

How do we reconcile these two texts from the same letter? I don’t know how those who read scripture “on the flat” deal with this, but when we understand ancient rhetoric as the art of persuasion, such apparent contradiction makes sense.

The first text comes from the opening section of the letter—part of what is called the “thanksgiving.” Paul uses the standard form of a Greco-Roman letter of his day, but he makes a few adjustments. Most letters were short and written to individuals, often by family members. A wish for the recipient’s good health follows the greetings. But Paul writes much longer letters to entire church communities. Instead of a “health-wish,” he includes a thanksgiving (except in Galatians), praising the community and hinting at themes he will discuss later. In thanking God for the Corinthian believers, Paul “butters them up” so they will be more receptive to the criticism that follows.

Comparing these two texts makes a good case for reading the New Testament letters as wholes, not simply as collections of separate beads of truth strung on an inspired necklace.

The Irony of “Christ Crucified”

In the last blog we set the stage for hearing Paul’s response to the quarreling factions in the house-churches he helped to plant. Paul is deeply troubled by this. “Has Christ been divided? Was I crucified for you?” he asks in 1:13. So, beginning at 1:18, Paul launches into his “gospel,” the theological underpinning of how to maintain unity of purpose within the Jesus-assemblies.

If we read 1:18-3:4 in light of the social and political realities of ancient Corinth and the Roman Empire, we would think Paul was either crazy or uselessly hurling himself against an immovable cultural way of life. The “wisdom of this world” (1:20) stands over against is proclamation of “Christ crucified, a stumbling block to Jews and foolishness to Gentiles” (1:23). We must here see the humiliating crucifixion of Paul’s Messiah not as substitutionary atonement but as Jesus’ giving up of political power, honor, and life itself (see previous blog post and Phil. 2:7-8). It is God’s foolishness and weakness that is wiser and stronger than human understanding (1 Cor 1:25).

How might this ironic bravado play out among the factions in the house-churches of Corinth? First go back to the descriptions in the last blog, from the “not many” well-born and upwardly mobile, to the poor free and freed laborers, to the slaves without honor. Who would be encouraged by such an upside down political alternative to Rome’s Empire? Who would prefer to integrate Apollos’s wisdom teachings with the attitudes and practices of their culture?

Locked Down on the Patronage Pyramid 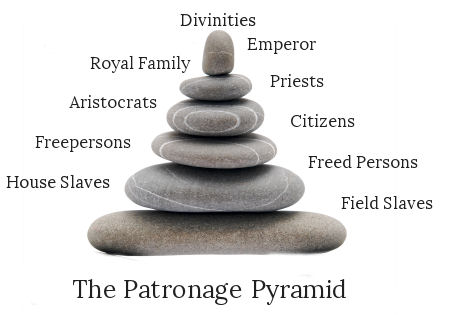 But we must not see these divisions as “class warfare,” or that Roman society consisted of upper, middle, and lower classes. Think rather of a patronage pyramid, where those with more prestige and wealth seek clients to publicly honor them. These clients then depend on their patron for jobs, occasional gifts, or as customers for their products. In turn, clients become patrons to those below them. Such pyramids of power, say Jonathan Reed and John Dominic Crossan in their book, In Search of Paul, present “a downward spectrum of patrons from divinity through royalty, priesthood, aristocracy, and citizens, to the free, the freed, the servile, and the enslaved” (p. 298). This system also means that clients cannot think independently of their patron; they must be loyal in order to survive.

Now imagine a house-church composed of patrons and clients in permanently unequal relationships who are now expected to share privileges with each other and follow Jesus’ pattern of self-emptying. Will those at the top heed Paul’s call to such counter-cultural behavior? Will those with patrons in the assembly feel free to challenge their patron if his behavior runs counter to Jesus’ gospel? Can poor Jews with stronger ethical instincts challenge those socially above them? What punishment awaits a slave who confronts her master at a worship assembly?

Read 1 Cor 1:18-3:4, first as someone with higher social status and then as someone without honor, such as an adolescent slave. How do you react to this text, depending on your place in a Roman Corinthian pyramid of power?