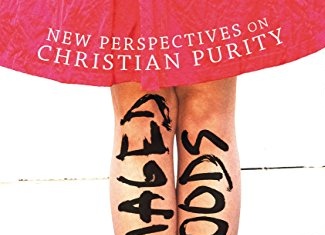 It’s no surprise to find readers of Her.meneutics, the blog hosted by Christianity Today, negatively responding to Dianna Anderson’s new book, Damaged Goods: New Perspectives on Christian Purity. Claiming Anderson jettisons “biblical” sexual ethics for her own, they are quick to dismiss her careful analysis of the purity culture (read the article here).

Despite their backlash, I find Anderson’s presentation of Christian purity to be well-reasoned and thoughtful, a far cry from her critics’ claims. Anderson, a freelance writer and popular blogger (her blog is Faith and Feminism), grew up in the purity culture, which has given her an up-front place from which to examine it. Of course, it is of no surprise to learn that she finds it wanting on several levels.

The clarity of Anderson’s argument gets her into hot water early on with evangelical readers when she says that her book “aims to develop a Christian ethic that doesn’t center around saying no, but through which we learn how to say a ‘godly’ yes”(p. 6).  Her transgression of the purity movement’s primary assertion—abstinence until heterosexual marriage—appears, unfortunately, to give them license to stop reading.

But for those who continue with Anderson’s analysis, they will find an excellent book that rises above mere critique to offer a positive perspective of personal sexual ethics.

Damaged Goods begins with a history of the purity movement, noting the important connection (and contrast) between the social hygiene groups of the 1920s that promoted education as a response to changing societal norms and the purity movement today that seeks to limit sex education to the home. Anderson also points out the Moral Majority’s reaction to the 1960s social movements and Roe v. Wade in 1973 provided the foundation for what has now become known as the American purity movement. Responding to an increased openness toward sexuality in American culture, the evangelical right has established its own sexual revolution, one that is viewed as biblical and divinely approved (p. 16).

Moving from a history of the purity movement to the myths it propagates as scriptural, Anderson argues that purity proponents rely on taking biblical passages out of context to assert the following claims: sex makes people one flesh; marriage is only between a man and a woman; one’s thoughts can send someone to hell; people belong to their future spouses; and the Bible clearly says premarital sex is wrong.

Having laid the background for her argument, Anderson’s book turns on Chapter Four, where she provides her experience as a window into the purity world and thus the beginning place for a development of her own sexual ethic. In contrast to what some readers on Her.meneutics claim about Anderson, she does not assume this ethic applies to anyone beyond herself; what she does say is that everyone should be able to explain their reasons for whatever sexual ethic she or he practices. The remainder of the book reveals what Anderson has come to understand about sexuality and details her sexual ethic, much of it in contrast to her previous experience within the purity culture.

Anderson’s critique of purity culture is incisive and clear. She rightly identifies how it promotes roles for women and men: women are primarily intended to have and rear children and to be in submission to their husbands. Further, the propensity to proclaim modesty relies on women’s bodies being seen as public property to be controlled essentially because men cannot control themselves. So, women are taught to be modest in public and then “a sexy companion” for their husbands in bed (p. 92). From the time she is a girl to be protected by her father to when she becomes a woman protected by her husband, “women’s bodies are not their own,” in the evangelical world of purity (p. 93). Of course, such a view, when seen for the ways in which it diminishes women, is a contradiction of the conviction that all people are created in the image of God.

Anderson also criticizes the purity movement for its distribution of power, which is to say that most of the messaging originates from white, heterosexual male pastors and is directed toward women, without any real understanding of women’s lives and certainly not informed by black experiences, institutional poverty, or poor education. This unacknowledged power imbalance makes it easy for unexamined arguments to extend from women’s bodies to abortion and contraception and even sexual dysfunction.

Perhaps Anderson’s most important critique is when she addresses the problem of rape within evangelicalism. “The narratives surrounding purity are so lacking in consent education,” Anderson says, “that many times stories of rape are passed off as dealing with ‘loss of purity’ and never examined beyond how they affect a person’s purity” (p. 150). Even more alarming, Anderson illustrates how some within purity culture justify sexual violence as punishment for when women misbehave (pp. 158–159).

In contrast to the purity culture that derives its messaging from treating women as objects and as things to control, Anderson invites women—indeed, all people—to be intentional in developing a thoughtful sexual ethic and to move beyond shame and ignorance. She suggests a new sexual ethic could include the motto of doing no harm and seeking the good of others. It is an attitude that honors the other person or persons in our lives, and is honest with them about the pleasure and shared responsibility of sexual experience. In short, Anderson invites people to reflect deeply about their intentions and to communicate them clearly, always seeking to treat the other person or persons with respect and care while also setting appropriate boundaries. These steps will enable people to move beyond sex as shame and toward a healthy attitude that sees sexuality as one aspect of who we are as human beings.

Beyond this sexual ethic, Anderson makes two final suggestions that her critics on Her.meneutics would do well to take into account. She says everything should be questioned and that doubt is a reasonable position. I can’t imagine a better place to end such a well-reasoned book, because it was these commitments that propelled Anderson on her own journey beyond purity culture—a journey that led her to know that God is love despite what she was taught by the church.