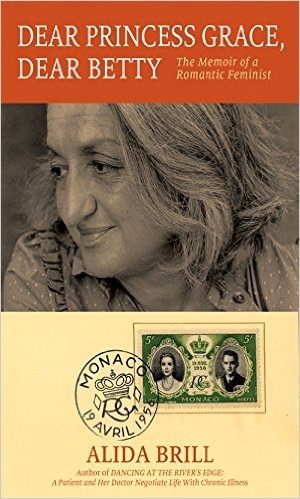 Dear Princess Grace, . . . So began a letter written by seven-year-old Alida Brill to recently married Grace Kelly, the American actress who, in 1956, was swept away from a successful Hollywood career when her prince chose her to be his princess of Monaco. She left in her wake a generation of girls—girls like Alida and me—convinced that we, too, would one day be chosen by the men of our dreams.

Alida, confined to her sick bed—the first sign of chronic illness—asked Princess Grace to send her a first-day cover stamp of the wedding. The Palace responded, earning Alida a trip to a local newspaper and the publication of a few words on her achievement. In time, Alida would realize that even princesses face limitations, and their endings are not always happily every after, but she quickly learned she could write something, get her name in the newspaper, and gain instant fame. She decided that, in addition to being chosen by Prince Charming, she would, also, become a writer.

In Dear Princess Grace, Dear Betty: The Memoir of a Romantic Feminist, Alida Brill, feminist social critic and advocate for women and girls, urges readers to consider the connection between romance and feminism. But beware! If you disagree with her conclusion, she may refer you to one of her best friends, a woman often credited with sparking the mid-twentieth century’s Second Wave of American feminism (First Wave Feminism was about women’s suffrage, achieved in 1920), Betty Friedan.

Feminism is an appropriate framework in which to assess the meaning of romantic love, as has been demonstrated in various contemporary scholarly publications. (Leave a message in the Comment Section below to request my short list of authors and titles, or offer your own suggestions.) At EEWC-Christian Feminism Today, the topic of romance flirts mostly through pages and posts associated with articles on love and marriage. I recall my introduction to the English romance writer, Elizabeth Goudge, in an article published in Daughters of Sarah (G. Brock, Jan–Feb 1987: 14–17). Yet, despite the breathtaking influence of romance in our lives, it is not always a topic easily broached, especially when it is tied to the word feminism. As Alida untangles her identify as a Romantic Feminist, I am reminded of my own efforts to answer the question, “How is it possible to be a Christian and a feminist?”

In 1963, Alida’s mother read Betty Friedan’s The Feminine Mystique. Alida writes, “Betty Friedan brewed a cup of feminist tea just the right strength for my mother’s taste” (p. 47). Her mother soon resolved to leave housework and boredom behind, and she upped the ante on encouraging her daughter to fill her life with words, books, and writing. Alida called it “living a life of the mind,” but the call of romance was strong, and she ended up marrying her high school sweetheart. It was a short-lived marriage. She went on to college, where she joined forces with a new love and married again. She kept her birth name, participated in consciousness-raising, and decided to focus her writing and activism on women’s issues. She was accepted into Ohio’s State Senate Fellowship program but followed her husband to his new job on the West Coast. Ultimately, their separation and divorce had more to do with her life-long illness than with her feminist politics, but feeling lost, betrayed, and disappointed, Alida ran to Manhattan with plans to “exist as a serious woman in a serious place” (p. 114).

Here, as the memoir transitions between her earlier and later life, Alida tucks in a chapter about the significance of women’s words and stories. A number of feminist writers are discussed, and true to Alida’s romantic sentiments, her essay concludes with the statement: “I’ve been searching for Leonard Woolf [Virginia Woolf’s husband] all my life” (p. 152). Among the many authors Alida came to know in her “serious” life was Betty Friedan.

The following chapter, “The Girl from Peoria Who Changed the World,” focuses on her relationship with Betty and revisits The Feminine Mystique, a book Alida believes might still ring true for many twenty-first century women. While her memoir offers only a passing glimpse of contemporary feminism, she notes that today’s young women seem to be as ill at ease with the word feminist as was Betty.

Concerning the topic of feminist convictions and romantic tendencies, Betty was adamant, as depicted in the following scene, which took place in 1978 after the two friends went to see the movie An Unmarried Woman, and Betty admitted she was let down by the film’s unconventional ending.

Alida asked, “Isn’t that the way we want it to end? The woman pursues her own life and doesn’t get sucked into a romantic fantasy.” Despite Alida’s defense of feminism, Betty’s skepticism led her to confess that she was, in fact, a romantic, too, but she added, “I’m not proud of it!”

Betty shook her head in irritation. “Being a romantic and a feminist are not in conflict. There’s no reason you can’t be both.”

Forced into an inner truth, Alida yielded. “Ok, Betty. I might as well call myself a romantic. . . . When people ask how that’s possible, I’ll refer them to you.”

During another chat, Alida admonished Betty for being so concerned about potential love affairs. Betty growled, “Don’t start that crap with me. All this feminist stuff came too late for me. I want to be with a man!” (pp. 215–216).

At Alida’s next wedding, Betty held one of the four poles of the chuppah (a Jewish wedding canopy). Her third marriage was a chaotic affair that ended only after her older husband’s death. In retrospect, she realized that, once again, she had seduced herself into believing in the romance of the courtship; she was still in love with the concept of being in love, she still wanted to be chosen, and she still hoped for a storybook ending.

It was time for new movement in her life; Alida named it a “Slow Love Movement” (p. 263). Romantic love, she concludes in the final pages of her memoir, is not made up of the stuff of fairy tales, but grounded in the intimacy of love’s real-life stories. “An authentic relationship,” she posits, “offers the possibility of a positive bond between a man and a woman.” It requires loving in mutually understanding and accepting ways that transcend entrenched cultural roles. It involves personal choice, and, though she makes only a brief bow to non-heterosexual love, it respects a diversity of choices. It is brave and radical love envisioned in terms “so nurturing and accepting that they are usually limited to descriptions of unconditional maternal love” (p. 260).

Alida invites us to join her on her journey from romantic fantasy to romantic feminism. She offers no clues as to what part religion, scripture, or spirituality have played in the conclusions she reaches, and her telling of her story bounces around between chronological and topical presentations, which occasionally left me wondering exactly how or when various events unfolded.

But isn’t romance an often bouncy ride? To Christian feminists who have an interest in the subject, I recommend this work by a Romantic Feminist. In Alida’s memoir, you are likely to hear some of your own stories, and in her conclusions, you may hear your own hopes for the rehabilitation of romantic love’s energy into an empowering force for both women and men.

A Strange Stirring: “The Feminine Mystique” and American Women at the Dawn of the 1960s (book review)