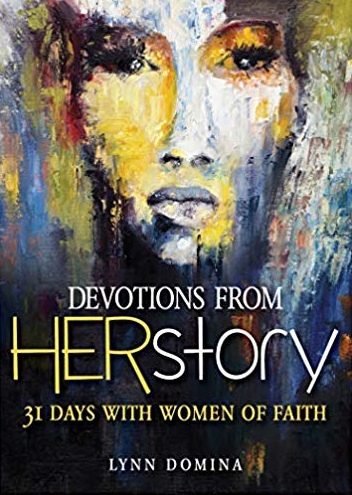 If you’ve ever longed for spiritual nourishment drawn from women’s experiences and accomplishments, then Devotions from HERstory: 31 Days with Women of Faith is definitely worth a look. Women’s History Month inspired Lynn Domina, author of Devotions from HERstory, to bring women’s stories to light specifically in the context of faith. She is the chair of the English department at Northern Michigan University and is the author of several books.

As the subtitle notes, there are daily entries for a month’s time, but the content is sufficiently rich that it could be used over a longer period. Using a creative approach, each entry pairs a biblical figure with a woman from history, highlighting a common theme and inviting connection with contemporary situations to interesting effect. For example, Eve is paired with modern day activist and foodie Alice Waters, while Tabitha, a lesser known woman of the New Testament, is paired with Vivian Leigh Soto, who died protecting her students at Sandy Hook.

Each reflection opens with a short scriptural passage to introduce the featured biblical character. Then the author describes the historical person, focusing on a single theme or situation from their life that she weaves with the scriptural person’s life story. A question for the day comes next, inviting the reader to connect with the theme illustrated by the day’s pairing, followed by a prayer, and then an action related to the theme.

Women from the Christian Bible form the starting point for each pairing, but the historical figures represent varied times, from the colonial era to the Civil War to the Holocaust to the Civil Rights Movement, and various faith traditions, including Quaker, Jewish, and Christian. Diverse ethnic voices include African American, Crow Indian, and Asian American. The author, who is white, handled this content sensitively in most cases, though the pairing of Hagar, a slave woman of color in the Old Testament, with Anne Hutchinson, a white Puritan woman in seventeenth-century Massachusetts, did not quite ring true for me. Key aspects of privilege in their respective contexts were glossed over, it seemed. Further, diversity of gender identity and expression is not reflected in this book.

Besides being well-structured for personal use, this book could also be used in group settings as a source of reflection and discussion. Further information is provided about the historical person at the end of each daily section, including additional resources. At the end of the book, there is a timeline of the featured historical women and a list of suggested readings on other inspiring women.

Stones of Humiliation for Adulterers—John 7:53-8:11