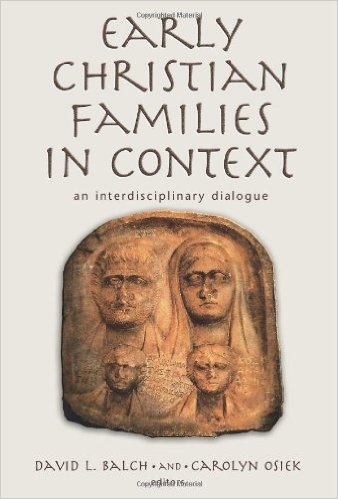 Religion, marriage, and family. Today these issues are big news items, from Republican initiatives to encourage marriage among low-income people, to anti-abortionist “family values” promoted by the Religious Right, to a constitutional amendment banning gay marriage, to a Supreme Court case challenging the “under God” phrase in the Pledge of Allegiance by an atheist father who never married his daughter’s mother.

This collection of seventeen essays is part of a major research project located at the University of Chicago and financed by the Division of Religion of the Lilly Endowment, Inc. The editors of this series of volumes assert that this book “will help contemporary debates. . .move past the clichés [declaring] what is Christian and non-Christian with regard to families, marriage, and sexuality” (ix). In other words, it can help you challenge your religiously traditional relatives, friends, co-workers, and conversation partners who may assume God ordained the middle-class, capitalist, heterosexual, male-headed, nuclear, monogamous family as the only pattern God will accept!

Early Christian Families in Context follows the 1997 Families in the New Testament World: Households and House Churches, another collection of essays by the same editors. Although the earlier volume was limited to contributions by church historians and biblical scholars with interests in social history, this one is more widely interdisciplinary and includes contributions by historians and classicists interested in the ancient Roman family.

Although this volume is no Da Vinci Code cliffhanger that you can’t lay down at 2 a.m., readers can choose essays that pique their particular interests. Following are main ideas of just a few that captured my attention for their relevance to women and the New Testament.

As gated communities become ever more popular today, and as the square footage of upper-middle-class housing expands, we are occasionally reminded of what is happening on the other end of town. Here, the numbers of homeless and hungry people grow, and poor children’s learning ability is affected by school absenteeism caused by asthma, which in turn is caused by cockroach droppings, leaded-paint, and rat urine in substandard housing.

Despite our democratic structures, many middle-class people today are geographically isolated from the poverty of our contemporaries. Not so in ancient Rome, asserts Wallace-Hadrill in this essay. His archaeological analysis shows housing there to be rather “mixed in nature, between grand houses (domus) and blocks of flats (insulae) and little shop units on the one hand, and buildings that formed focuses of local communal life on the other — baths, clubs, and corporations” (13). Even the “big houses” were knit to tenements and shops on their street by ties of blood, shared slaves, patron-client obligations, and social mixing in shops and clubs. Never a single-family unit, says Wallace-Hadrill, a domus is a “houseful,” with no clear boundary between family and neighborhood. (Think of what possibilities for neighborhood evangelism such an arrangement might provide!)

“The Problem of Gendered Space in Syro-Palestinian Domestic Architecture” (pp. 44-69)

There is no gendered space, concludes Eric M. Meyers, a long-time archeologist excavating Roman period Galilee. Women were not secluded in their homes, as has sometimes been assumed. In most places here in Galilee, living quarters were built around a common courtyard, in which economic and social life centered. Confining women to the house would not have been possible given this architecture.

Such evidence lines up with previous archeological conclusions that there is no evidence until the 9th century CE that women were seated separately from men in synagogues.

David L. Balch’s research on wall paintings in Pompeiian houses (Pompeii was buried by a volcano in 79 CE and later excavated) demonstrates that many of them portray mythological scenes of torture and violence. One typical subject is the sacrificial killing of Agamemnon’s daughter Iphigenia, which gave the Greek warriors favorable winds to sail to Troy and thus eventually to conquer the Trojans. Another is the death by poisonous snakes of the Trojan priest Laocoon, who suspected a plot and opposed the wooden horse being brought into Troy. Balch suggests that this type of wall painting existed throughout the Roman world. Since Christians met in homes, such wall paintings could have provided ready-made illustrations for the preaching of the crucified Christ (included are several color photos of these paintings). Balch does stress, however, that the meaning of human suffering and death in these stories is fundamentally different from the Christian view, especially since they are rooted in ethnic rivalries.

I was intrigued with this thesis because of its similarity to America’s current fascination with Mel Gibson’s gruesome “Passion” movie. Yet it must be weighed with the reality that there are no examples of Christian art portraying Jesus’ crucifixion until the early 5th century and they are extremely rare until the 7th. This absence of the cross in art provides further evidence that “substitutionary atonement” theology (God’s Son dying for sin in place of us sinners) was not the primary way in which Jesus’ death was understood.

“Typical and Atypical Family Dynamics: The Cases of Babatha and Berenice” (pp. 130-156)

A colleague from another department at my college recently asked me if polygamy existed in the Greco-Roman world of the New Testament. This essay by Ross. S. Kraemer discusses the case of Babatha, our only direct evidence of a man married to two living women in Roman Palestine. Babatha was an ordinary Jewish woman born around 100 CE, who would never have been remembered except that a cache of her personal papers relating to her inheritance rights was discovered in one of the caves around the Dead Sea. Through them we find that after she was widowed at a young age, she became the second wife of a man in En Gedi, by the Dead Sea. Kraemer compares her situation with that of the upper-class Jewish Bernice (see Acts 25) and concludes that, for both women, their identity as Jews has little to do with their lives and destinies. If one may extrapolate, most Jews, even in Palestine at that time, were not very different from their non-Jewish contemporaries.

“Was Celsus Right? The Role of Women in the Expansion of Early Christianity” (pp. 157-184)

Celsus was a 2nd century Roman who criticized Christianity on many levels. One of his charges was that women and children were recruited and then encouraged to defy patriarchal authority in their households. Further, such women in these households then used their influence to continue spreading the gospel message. Margaret Y. MacDonald examines these charges and uses other evidence to show that Celsus, though exaggerating somewhat, was basically on target. As wives of mixed marriages, as patrons, heads of households, mothers, and teachers, women were very influential in evangelization.

Of all the essays, this one by Carolyn Osiek stands out for me as the most provocative. Though female slaves were ubiquitous, the historical record provides thin evidence of their lives and experiences and thoughts. Even within the Christian communities, we know little of how they fared. Considering that slaves had no legal rights to their own bodies and it was not considered immoral or illegal to rape them or carry on any kind of sexual relationship with or without their consent, what did the Christian communities do about this? Did they discourage Christian slaveowners and other freepersons from sexually abusing slaves? Did it matter whether or not their slaves were Christians? The New Testament documents and other Christian texts are strangely silent about this practice. In fact, 1 Timothy 6:1-2 encourages slaves to “regard their masters as worthy of all honor” and those who have believing masters “to serve them all the more.”

Though this essay only discusses female slaves, we know that male slaves were also used sexually by owners and by whomever their owners permitted. We are left wondering whether or not early Christians held a double sexual standard between slave and free, or whether Galatians 3:28 implicitly assumes one standard for all.

Study of the social context of our biblical texts has advanced tremendously during the last several decades because of its interdisciplinary and inter-religious approach. An essential point of agreement among scholars is that literary texts cannot tell us all we can know about the Greco-Roman world of the New Testament. We must use inscriptions (on tombs, plaques, etc.) as well as the material culture continually being unearthed and analyzed by archaeologists. This knowledge can prevent us from reading our own contemporary cultural values and behaviors back into the Bible. American Christian “family values” today were hardly the same in the early Christian communities of the Roman Empire.

Early Christian Families in Context is a mine of valuable background for our understanding of the New Testament and early church. Most or all of it should be accessible to interested lay people who truly want to understand the cultural gap between our world and that of our sacred texts — and to use this knowledge to wisely interpret and apply those texts.

Getting around the Roman Empire