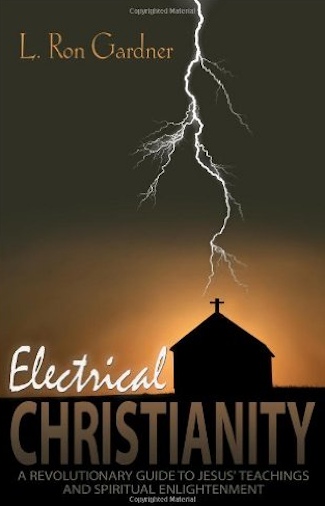 What I like most about Electrical Christianity is that Gardner provides cogent and clarifying analogies between electrical currents and Spirit-filled living, which he calls “Plugged-in Presence” or “Holy Communion.” He defines the Eucharist as the act of connecting to our Divine Source (or Presence). Gardner uses Ohm’s Law, the mathematical equation for an electrical circuit, to explain how we human beings can return to a state of universal connectedness and thus allow spiritual Light-energy to pour into us and through us. Our bodymind is like an electric lamp, useless until it is connected to an electric outlet. In order to save us from our primal “sin” of imagining ourselves estranged from God, we must be plugged into the socket (our Divine Source), after which we will be able to share light. The Holy Spirit is the electrical current or amperage; Holy Communion (consciousness of unity; relational at-one-ment) is the electromotive force or voltage; and ego-resistance to the flow of the current corresponds to ohms. The more we surrender or let go of our sense of being separate, the more freely the Holy Spirit can shine through us.

Gardner explains the Christian Trinity in terms of the Father as all-pervading Presence (radiant Space and Power); the Son as the eternal Self (our Christ-nature or Buddha-nature); and the Holy Spirit as the Father’s dynamic Power or Light-energy. The point is that once we as God’s “Son” realize that Consciousness or Awareness is our own True Nature and is coextensive and coessential with the Divine Presence-Power, we realize that we are consubstantial with the Virgin Mother (the Holy Spirit) and the ineffable Father (the unknowable Divine Being). Gardner provides very specific instructions about how to go about “plugging in,” and delivers them in an extremely helpful question and answer format.

Another aspect I like about Gardner’s book is that he knows world religions so intimately that he can provide analogies from them that clarify Christian perspectives. For instance, when speaking of the purifying Flames that must burn through a disciple’s psycho-physical resistance or karma, he compares that burning to purgatory in Christianity, tapas or heat in Hindu yoga, and being “fully cooked” when one has become a perfectly enlightened Indian master. I call myself a transreligious Christian because my faith has been so much illuminated by inter-religious studies and dialogue; and Gardner’s transreligious analogies are brilliant.

I also appreciate Gardner’s inclusion of atheists in his spiritual vision. Although atheists will reject religious language and symbolism and will see themselves as plugging into a secular energy of universal consciousness (the unity of the Whole), nevertheless the electrifying sense of Oneness is available to people from any religion or no religion.

But then, alas, we come to Gardner’s understanding of the politics of Jesus, who he thinks would be disgusted at the “neo-Marxist fascism of Obama and his Democratic brethren.” (But, on balance, he calls George W. Bush our worst president ever). It turns out that Gardner considers Ayn Rand his political savior, even though she never learned to meditate (plug-into Spirit). As a libertarian, Gardner thinks that correct politics requires “laissez faire capitalism.” Well, if indeed everyone on earth were constantly plugged into our Divine Connection, constantly communing with God’s universal Light-energy, we could reasonably expect that capitalists would willingly and tenderly care for those less fortunate than themselves. But Gardner (like libertarians generally) seems to pay no attention to the lessons of history. It is because of human ego-separation and “me-first” greed that we need government intervention to rein in the totally selfish exploitation of others.

Gardner argues that a New World Order Ruling Elite (i.e., the international banking cartel and the giant multi-national corporations) are working to create a totalitarian world order that combines Marxism, capitalism, and fascism (“state-ism”) in ways that will satisfy the desires of the elite. And I must admit to deep concern about the marriage between big business and government, so that our elected officials can essentially buy their way into office. Gardner may even be right that “in a moral, or ‘integral’ society,” the State would still exist, but its function would be “limited to providing national security and protecting and preserving individual rights” (p. 148). However, society is not there yet, and in the meantime, people living in poverty still need opportunity, food, housing, clothing, health care, and human respect, while rich capitalists still need to be regulated in order to help level the playing field.

The slippage in Gardner’s thinking is perhaps best illustrated by his treatment of Matthew 20:1-16, which he claims demonstrates Jesus’ “free-market bias and respect for privately owned business.” He says that “when the last worker who showed up an hour before quitting time was paid the same as those who had worked all day, Jesus tells the all-day workers to quit complaining because they were treated fairly according to the terms of their individual contracts” (pp. 134-5). But even a glance at Matthew 20:13-14 reveals that it is not Jesus, but the arrogant owner of the vineyard who defends his cruelly unjust handling of wages. Serious study of Jesus’ parables demonstrates that Jesus was very critical of the greedy capitalists of his own day. We may reasonably conclude, therefore, that he would be equally critical of unrestrained capitalism in our own era.

Nevertheless, there is much to like about L. Ron Gardner’s Electrical Christianity. Those who are seeking help with prayer and meditation might especially profit from studying this book.

Carnivores and Vegetarians—Can We Get Along? (1 Corinthians 8)