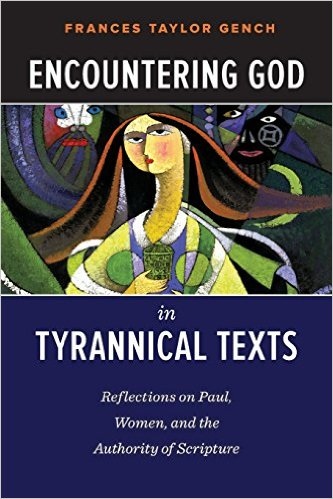 I did not make up that title! The author, a respected Presbyterian biblical scholar, agrees with some of us “radical feminists” that certain texts in the Bible have truly tyrannized women over the centuries. Like many of us, she says she has often wanted to get out scissors or marker and “’X’ these portions out of [her] Bible and then record obscene remarks about the apostle Paul for future reference”! (p. 2). Although some readers of our EEWC/CFT website may have already excised or ignored offending texts, those of us who still value the Bible as authoritative should find this book very helpful.

Most striking may be the call for an attitude shift. Gench herself asked the following question of Ellen Davis, another feminist scholar: “Is there any biblical text you would reject?” Davis’s response: “No biblical text may be safely repudiated as a potential source of edification for the church. When we think we have reached the point of zero edification, then that perception indicates that we are not reading deeply enough; we have not probed the layers of the text with sufficient care” (p. 2).

Gench then proceeds to “probe deeply” into six texts attributed to Paul, five of which many of us wish had never been written:

•  1 Timothy 2:8-15—women not permitted to teach, no braided hair, pearls, or expensive jewelry; women will be saved through child-bearing.

•  Romans 16:1-16—a major descriptive text that counters all of the above and recognizes the leadership of many women in the churches of Rome.

Gench describes each text in its own chapter, then places it in its literary, cultural, and political contexts. For example, the first five texts are all prescriptive, a man or men telling women what not to do, which indicates that women must have already been doing it. Most likely three, perhaps four, of the problem texts were written in Paul’s name decades after his death, as the Jesus Movement was morphing into a larger organization.  Gench also critiques attempts to “whitewash” a text, making it sound less bad than it really is (p. 8). (I’ve seen such protectiveness in material written or promoted by Christians for Bible Equality, a sister organization.)

In her first exegetical chapter, on 1 Timothy 2:8-15, Gench lays out her “strategies for engagement with tyrannical texts.” She then applies the relevant strategies to each subsequent chapter and text.

•  Recommendation 1: Remember that “the difficult text is worthy of charity from its interpreters.” This is not pity but generosity and patience. For example, the author of 1 Timothy is very likely not Paul but a later church leader contending with Christian Gnosticism (1:4; 6:20; 2 Tim 2:18), which attracted women with its “rigorous asceticism and celibate piety” (p. 10). In addition, the author seems very concerned about the church’s public image and reputation within pagan Roman society.

•  Recommendation 2: Argue with the text, confident that wrestling with Scripture is an act of faithfulness. Gench lifts up the Jewish tradition of communal debate over a text, pointing out that sometimes multiple meanings are possible. She strongly repudiates the conservative view that “if the Bible says it, that settles it.” Instead, scripture itself challenges other scriptures. Although Gench finds the Ephesians 5 text about wifely submission hardest of all for her to contend with, she notes how the Ephesian author in 2:11-22 argues eloquently for ethnic equality (Jew and Gentile) in Christ. Why not gender equality as well? (cf. Galatians 3:28).

One of Gench’s longest chapters is on 1 Corinthians 11:2-16, which she finds just as confusing as do other responsible interpreters. Paul’s argument about women’s head covering veers illogically from theological to political to cultural honor/shame issues and so on. She concludes, as I have also, that Paul was still very much in process on gender issues!

•  Recommendation 3: Resist the temptation to throw the baby out with the bathwater. Is there no truth in any of these texts? In 1 Timothy 2:9, was the author correct in asking wealthy women not to flaunt their pearls and gold jewelry in front of poorer women during worship? Or note that in 1 Corinthians 11:5 women do pray and prophesy publicly.

•  Recommendation 4: Learn from the dangers as well as the insights that biblical texts present. For 1 Corinthians 14:33b-35, Gench accepts the “spiritual value of silence in worship,” but “injunctions to silence can also bear dangers and serve oppressive ends” (p. 104). We feminists are only too aware of the power imbalance and potential for abuse that happens when men try to restrict women from actions they encourage for themselves.

I was intrigued with Gench’s discussion on widows defined as any unattached women in 1 Timothy 5, partly because it confirmed my own research on widows in Acts 6:1-6. The author of 1 Timothy is highly patriarchal, asking the church to support only widows over 60 and without family. Younger women are good only for marriage, childbearing, and housework. No doubt many younger Christian women, fearing potential domination within an arranged marriage, or the high rate of death in childbirth, or all the drudgery required of wives in a non-technological world, were attracted to emerging orders of widows devoted to prayer, study, and service. Sadly, the author can’t imagine women’s speech as any more than gossip! (1 Tim. 5:13-14).

•  Recommendation 5: Don’t let anyone tell you that you are not taking the authority of the Bible seriously! It is these tyrannical texts, more than any others, that force us to explain how we understand biblical authority.

I commend this book to any reader who struggles with “tyrannical texts.” As Professor of Biblical Interpretation at Union Theological Seminary in Richmond, Virginia, Frances Taylor Gench is very well-read on this topic, attested by 30 pages of notes. I recognize many of her sources and can affirm them as well. This book could also make a fascinating group study where participants not only wrestle with these “tyrannical texts,” but also with Gench’s hermeneutic—her interpretive method of dealing with them. For example, as a Presbyterian in the Calvinist tradition, she may place greater emphasis on the canonical status of these texts than would others from different church backgrounds.

There is much to learn within these pages. Though sometimes wordier than necessary, Gench encourages us to argue with these texts, scream at them if necessary, and carefully probe the historical and theological layers of each one.