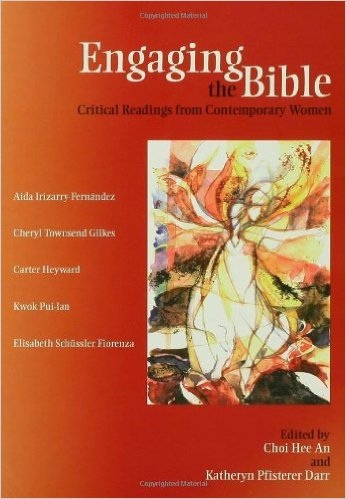 Based on recent programs at the Anna Howard Shaw Center at Boston University, this book engages the Bible from the perspectives of five women theologians representing different cultural, ethnic, and/or social perspectives.  This medium proclaims the message that “our interactions with texts (or films, or paintings, etc.) are invariably conditioned to some extent by the presuppositions, ideas, and judgments that shape our own, unique worldviews.”  And accordingly, that “no author, film director, or artist creates ex nihilo (‘out of nothing’) since they, too, are products of their times, contexts, experiences, beliefs, and imaginations” (p. 127).

The purpose shared by the authors and editors of this volume is to “illustrate how we can better equip ourselves, our churches, and our communities to raise multicultural consciousness and to broaden and enrich the interpretive strategies by which we bring our own struggles and experiences into dialogue with biblical traditions” (p. viii).

Cheryl Townsend Gilkes, who chairs African-American Studies at Colby College, uses the story of Lazarus begging at the rich man’s gate to demonstrate how African-American oral tradition, Negro spirituals, and cultural imagination interact to create prophetic, apocalyptic readings of the Bible.  She charges that we Christians in the United States have lying at our gates “not only the inequities of race, ethnicity, sexual orientation, gender, and physical disabilities, but [also] poverty, which leaves thousands of people dying daily of HIV/AIDS and other preventable illnesses” (p. 18).  Read this and tremble!

Kwok Pui-lan, who teaches at the Episcopal Divinity School, focuses on biblical “loose women” – Rahab and the “unnatural” women of Romans 1:26 – to provide an Asian-American perspective on U.S. colonialism.  She writes, for instance, of the “unchecked arrogance with which America insists that it is called to bring freedom to the world in the current political messianism.  Such claims are ironic when America has yet to deal honestly with the hypocrisy of its national myths…” (p. 31).  Reading those words brought to mind my youthful confusion, disillusionment, and grief as I began to realize the truth about slavery and what had been done to Native Americans.  Kwok Pui-lan reads the Rahab story “against the grain” by taking a Canaanite perspective in which, like Pocahontas, Rahab is a “good native” who acquiesces voluntarily to the conquerors of her own people.  She also reads Rahab from the angle of Asian women “compelled to provide sexual labor as an integral part of global markets and military buildup” (p. 38).  Like Rahab, such women have stories that are “fragmented, incoherent, and half-erased” (p. 39).  In her discussion of Romans 1:26, Kwok highlights “the tension between claims that Paul was anti-imperial and that his subscription to cultural assumptions supported and legitimate[d] state power” (p. 45).

Aida Irizarry-Fernández, a United Methodist District Superintendent, describes a Latino communal method of biblical study with particular focus on the woman who anoints Jesus (Mark 14:3-9) and the passing of the mantle from Elijah to Elisha (II Kings 2:1-14).  Both stories emphasize leadership by leaving our comfort zones, ripping our cloth of privilege or summoning the courage to break the alabaster jar despite pressure and criticism.  The communal Latino method is first to See (examine textual details), then to Judge (analyze readers’ own circumstances in the light of the text), and finally to Act (take steps to implement the changes suggested through the text).

Carter Heyward, professor emerita at Episcopal Divinity School, focuses on Isaiah’s “peaceable kin-dom” through lesbian feminist Christian lenses.  She points out that the Bible is both “a splendid resource book for spiritual journeying” and that “it has its limits, its places of short sightedness, oversight, ignorance, and oppressiveness” (p. 111).  From this angle of vision, “the only way to accept the Bible as a meaningful authority in relation to what the church should teach about homosexuality is to read the Bible against itself—for example, as testimony to a God of justice, mercy, and compassion struggling for right relation and liberation, rather than as a rule book written for a sexually proscriptive God, an overseer of patriarchal logic” (p. 114).  In other words, “Just as Jesus took it upon himself to argue with and re-imagine the scripture of rabbinic Judaism, so too we are urged by the same Spirit of God to wrestle with, and think against, the biblical text whenever it contravenes Micah’s call to do what is just, love what is merciful, and walk humbly with our God” (p. 122).

Every September at my Kirkridge Sisterly Conversations weekend, I give a presentation on the Bible as a positive resource for lesbian, bisexual, and transwomen and our friends – so it should surprise nobody that I admire this book.  For those of us who in the 1970s and 1980s proclaimed ourselves “biblical feminists,” at a time when the phrase often seemed oxymoronic if not heretical, Engaging the Bible is a refreshing resource.  I strongly recommend it for personal study, seminary and adult education classes, and discussion groups.