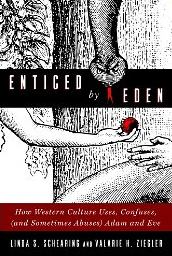 In one way or another, all of us have been shocked by the recent reports of the National Security Administration’s ubiquitous eavesdropping. Whether we spend most of our time online or with a smart-phone in hand, the realization that our use of these devices means our government has access to our personal information is alarming—even if we had inklings this was most likely possible, if not already occurring.

There’s no doubt about it: our lives are increasingly shaped by the presence of emerging technology.

In a similar way, our lives are also molded by something very old: the story of Adam and Eve. While we may think our age of biblical illiteracy means the garden episode is far from our collective memory, Linda Schearing, Professor in the Department of Religious Studies at Gonzaga University, and Valerie Ziegler, Professor of Religious Studies at DePauw University, in their entertaining and informative study, demonstrate this is far from reality.

Enticed by Eden: How Western Culture Uses, Confuses, (and Sometimes Abuses) Adam and Eve is an eminently engaging romp through American popular culture, exploring the myriad ways this ancient text reveals its staying power. “Whether they realize it or not,” Schearing and Ziegler write, “Americans spend a great deal of time negotiating their world with Adam and Eve” (p. 3). From political debates about gender to the familiar technology symbol of an apple with a bite missing, Adam and Eve inhabit our daily lives.

But Schearing and Ziegler investigate the plethora of these images for another reason, and it is one we, too, should be considering. They write, “Ultimately, commonplace images of Eden matter because those who have the voice to proclaim and the power to pursue their reconstructions of the Garden, or to recycle its symbolism, will irrevocably shape American society” (p. 11). This narrative is powerful, and the way it molds or warps society is equally powerful and therefore needs our sustained critique.

Two overarching themes provide the framework for Schearing and Ziegler’s analysis: recreating Eden, which explores the way many Americans wish to return to the paradise Eden represents by rejecting contemporary culture in favor of strong patriarchal claims where women are subordinate to men and where men are seen as divinely appointed authority figures; and recycling Eden, which examines how many use this memorable story to support their own interests, especially evident in advertising schemes.

Those who seek to recreate Eden, who believe God’s design is for a return to paradise, are explored through three chapters: “Someday My Prince Will Come (When Eden Becomes Camelot)”; “This One Shall Be Called Soul Mate (Or Will She?!): Adam, Eve, and Online Dating”; and “Adam as Alpha Male (Christian Domestic Discipline and the Erotics of Wife Spanking).” In their analysis of various people from T.D. Jakes, to John Piper to Nancy DeMoss and Mary Kassian of True Womanhood to Eric and Leslie Ludy, what the authors discover is a romantic lens through which the Genesis narrative is read. Adam and Eve become archetypes for romantic love. And when this love story is augmented by an affirmation of male supremacy, the drama takes on a coloration the writer(s) of Genesis likely never imagined. Or, as Schearing and Ziegler argue, “When believers imagine God as the Creator of Romance and Eden as a medieval bastion of male privilege, it is no wonder that they see Eve and Adam—as well as themselves—as characters in Camelot” (p. 37).

While each religious author or teacher who yearns for Eden portrays a different emphasis, whether purity or spanking, rejecting birth control or refusing to date, their common theme is of Eden as a paradise where Adam and Eve once fell in love and where we, too, can learn God’s intention for marital and familial bliss, thus recreating Eden.

But Eden’s intrigue is not felt only by American Christians. As the authors readily convey in the second section of their book, recycling Eden, this story is used throughout American culture. When the narrative is used outside of its context as Scripture, it has the potential not only to have little resemblance to the story as it exists in Genesis, but to deconstruct it as well. In this section, Internet humor, advertising, and “sexploitation” of the narrative are brought into sharp relief.

Schearing and Ziegler suggest Genesis, as a marketing tool, functions effectively because two of its themes are especially good for marketing: attraction/temptation and sin/taboo. Further, the serpent can be viewed as an adept salesperson, calling attention to successful techniques of persuasion (p. 112).

Evidence of Adam and Eve as successful marketing figures can be seen for example, Schearing and Ziegler explain, in the expansion of Adam and Eve stores. Phillip D. Harvey, the founder of Adam and Eve as well as two NGOs, sees the irony in combining pornography with charity but nevertheless envisions his sex-based stores as promoting positive images of sex (p. 145).

Enticed by Eden will make Genesis 2-3 take on new dimensions for most every reader. Schearing and Ziegler are not only skilled researchers; their writing is clear, concise, and compelling. Their goal of demonstrating the prevalence of Adam and Eve throughout American popular culture is easily achieved, but so is a more subtle nuance: the destruction of the idea of a “fixed” text. Providing the evidence of how this narrative functions not only among groups of Christian readers but also among groups with no Christian underpinnings, the authors offer a convincing illustration of the dynamic nature of texts.

While Schearing and Ziegler aptly point out the sexism prevalent in how many Christians use (and abuse) Eden, the examination of how other Christians are deconstructing these false readings of Genesis is largely missing. It remains for others to produce such a study so that those who view Genesis as Scripture and who do not seek to recreate it will also be included in this discussion. If this ancient text does, in fact, shape American society, we must not let sexism have the final word.