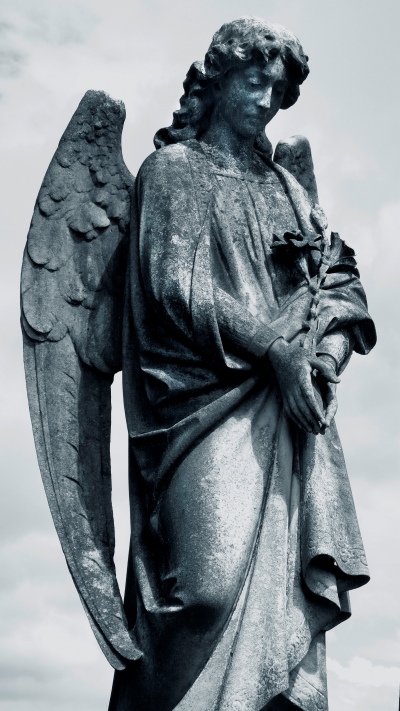 The last section of Revelation shifts from a highly visual description of the New Jerusalem to a concluding conversation between John the Seer and Jesus, transmitted through John’s angel guide (Rev. 22:6-21).  Eugene Boring observes that, with one exception in verses 18 and 19 (noted below), this text presents no new ideas but instead summarizes themes developed throughout John’s vision (Revelation, p. 224).

The entire scroll of Revelation would likely have been read aloud in the Sunday worship service in each of John’s seven churches in Asia Minor, followed by the Eucharist in the context of a communal meal. As John closes, he must bring his listeners back into their real world as nonconformists within their cultural context with its worship of the emperor and multiple deities, including power and wealth.

First, an angel speaks the words of Jesus. “I am coming soon! Blessed is the one who keeps the words of the prophecy of this book” (22:6-7). John falls down to worship the angel, but s/he will have none of it. “I am a servant just like you. Worship God alone!” (v. 8). Is this a veiled reminder to John’s audience of how subtle are the pressures to worship the militaristic and materialistic gods that surround them in the Roman Empire? Or is John also warning his people against a misguided worship of spiritual phenomena?

Several additional themes in this closing section are also worth noting, some of them paradoxical.

On one hand, God and Jesus merge into one entity. In verse 6, “the Lord, the God of the spirits” identifies as “the Alpha and the Omega, the first and the last…” in verse 13. But this is the same person as “I, Jesus…the root and descendant of David, the bright morning star” (v. 16). As in Revelation 1:4-8, the exalted Jesus is now inseparable from the one God of the universe.

On the other hand, Charles Talbert also reminds readers that “the pre-Easter Jesus and the risen Christ are the same person” (The Apocalypse, p. 109). He cites statements by Jesus in earlier chapters of Revelation that are similar to what he said in the Gospels. Compare, for example, Revelation 3:2-3 with Matthew 24:42-44.

Secondly, Jesus reminds his hearers four times that he is coming soon (vv. 6, 7, 12, 20; see also v. 10). Skeptical readers today might think that if Jesus has not returned for over 1900 years, he never will. But John M. Miller suggests that this promise may refer to God’s continual involvement in our world and corresponds to Jesus’s statement in the Gospels, “the reign of God is at hand” (Miller, p. 187). John Yeatts writes, “The present tense indicates that Christ’s coming is a permanent reality. Christ is always coming soon” (Revelation, pp. 416). Bruce Metzger concurs in this way: “In the Christian doctrine of the last things, the imminence of the end is moral rather than chronological; each successive generation…may be the last. In that sense, the time is always near (22:10). It is therefore the part of wisdom for believers to be ready to meet their Lord” (Breaking the Code, p. 105).

But Revelation 22:10 does hint at a shift in expectations from past centuries. The angel tells John, “Do not seal up the words of the prophecy of this book, for the time is near.” This contrasts with Daniel 12:4 and 9, where 200-300 years earlier, the writer is told to “keep the words secret and the book sealed until the time of the end.” The intervening historical event of the life, death, and resurrection of Jesus—the standing slaughtered Lamb of Revelation 5:6—has made his return imminent. His bodily resurrection, as the “firstfruit” of what is to come, brings hope to believers.

Thirdly, note the seventh and last beatitude in this book in 22:14. (The previous ones are in 1:3, 14:13; 16:15; 19:9; 20:6; 22:7.) “Blessed are those who wash their robes so that they will have the right to the tree of life…”  In Revelation 22:14, the verb “wash” is a present participle in the original Greek, denoting continuous action. The faithful continually wash their robes so they “may enter the city by the gates,” since all idolatrous sinners and those who love and practice lying must remain outside (v. 15). This places a strong emphasis on the continuing righteous deeds of believers. (Does it also imply that evil will continue in the world outside of the Holy City?)

After a final invitation to come to the water of life (v. 17), John warns against adding or taking away from the words of this book (vv. 18-19). This warning has often been misused to chide readers for changing any word of a particular translation of the entire Bible. Instead, Metzger suggests it is the ancient equivalent of copyright. “When books were copied by hand, scribes would occasionally add comments of their own or leave out words they thought were unsuitable” (p. 106). So John adds a solemn warning:  no changes, because he has received a genuine prophecy, a special revelation from God.

John closes with verse 21, a benediction of comfort and encouragement for those who struggle to remain faithful in a culture that does not understand them—a culture not unlike our own.

Our last lesson will be an appendix on “Christian Zionism” and what can go wrong when Revelation and other apocalyptic biblical texts are misinterpreted.

Talbert, Charles H. The Apocalypse: A Reading of the Revelation of John. Louisville, KY: Westminster/JohnKnox, 1994. P. 109.

American Jezebel: The Uncommon Life of Anne Hutchinson, the Woman who...