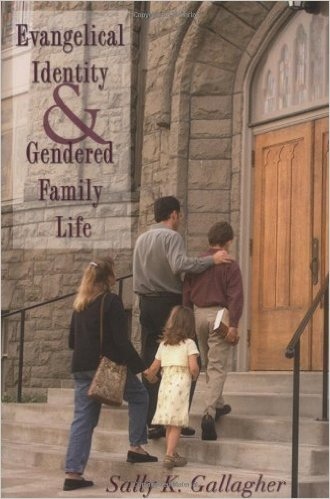 Some people wonder why so many sincere, intelligent Christian women hold on to stereotypical views about gender when their own lives seem either to belie these views or to be at least ill-served by them. Others observe couples whose behavior doesn’t reflect the gender ideals they profess and wonder why the rhetoric people use to describe gender is often at odds with the reality of their lives. Still others wonder if EEWC’s critics are right in charging that our adopting progressive views about gender and sexuality is merely another “accommodation” to and “compromise” with secular trends.

These questions — and others — are among the significant themes pursued by sociologist Sally Gallagher in her book, Evangelical Identity and Gendered Family Life. Her focus is on how “ordinary” self-identified evangelicals talk about gender, family, and religion — and how this “talk” contrasts with what really happens in daily life. She explores the purpose that ideals and beliefs serve for people, even when they’re not always put into practice. Finally, she examines how people actively use their religious beliefs in adapting to a changing society.

Gallagher employed systematic research based on in-depth interviews as well as a national telephone survey that was part of a larger study funded by the Pew Charitable Trusts. She finds some amazing things. For example, in a national sample of self-identified “evangelicals,” fully 90 percent claimed that husbands should be the head of the home, 87 percent claimed that marriage should be an equal partnership, and nearly 78 percent affirmed both claims.

Similarly, when reviewing the evangelical advice literature of the last twenty years, Gallagher observes that though male headship continues to be affirmed, the definition that is given headship by evangelical organizations such as Promise Keepers and published authors has been softened to mean “servant leadership.” Clearly mixed, if not outright contradictory, views about gender and marriage are retained by today’s evangelicals.

Looking at what people really do, as opposed to what they believe, Gallagher found that most evangelicals in the study, despite their stated beliefs, were “pragmatic egalitarians” in decision-making and in household division of labor. With over half of married evangelical women employed outside the home (56 percent), flexibility of gender roles and active father involvement have become fairly typical in family life. Gallagher describes this amazing mix of beliefs and behaviors as “symbolic headship” and “pragmatic egalitarianism.”

So why do so many evangelicals retain the language of male headship at all? What does holding onto traditional rhetoric about husband’s headship do for people? Gallagher suggests a variety of answers. Many women respondents claimed to gain a sense of security from having a husband who takes “responsibility” for being “head” of the home. Similarly, Gallagher observes that women respondents sometimes used their own “submissiveness” either as a tool for managing marital conflict or as a strategy for getting their own way. Another sort of answer is offered by evangelical guru James Dobson, who defends the importance of male headship by using sociobiological claims that men need women and marriage, but will only be faithful if “allowed” to be “head” — not a particularly biblical argument to be sure!

Ironically, as a result of the economic changes of the last thirty years, especially the declining wages for average males, many evangelicals find themselves participating in dual-earner households. Retaining a belief in husband as “head of the home” thus serves as an important marker — a way of asserting values different from those of the secular world. Assuming Gallagher’s analysis to be correct, I only regret that the marker of sub-cultural distinctiveness is not instead the biblical injunction to love our enemies and do good to those who do us wrong.

There’s a lot more that will interest EEWC members in this book.

Gallagher reviews the historical development of American Protestants’ views about gender and family, beginning with the Puritans in Colonial America, moving through the Great Awakening, the gradual development of the doctrine of separate spheres for men and women, and the changing roles for women that various religious reforms implied. Those not already familiar with these histories will find, for example, the discussion of Puritan beliefs intriguing. Due to the household-based economy of the colonial era, the co-labor of male and female family members (including children) was requisite for survival. Hence, mutuality in marital practice was common, despite a simultaneous belief in hierarchy.

Gallagher shows how beliefs about Spirit-led worship and spontaneous conversion opened the doors for women’s involvement in public religious activity. She also shows how the view of husbands as breadwinners and wives as domestic care-givers was not developed until the 1800s, when the “cult of domesticity” was developed in the context of increasing wage-based labor and the shift to men working outside the home.

Gallagher reviews as well a variety of Protestant authors’ gender views, particularly in the period following World War II. Some of us who have enjoyed C. S. Lewis’s Chronicles of Narnia and his works in apologetics will be saddened to be reminded about the highly gender-essentialist views he expressed in his adult fiction. Dorothy Sayers, a favorite mystery author and friend of Lewis, offered a more appealing approach to counter his views in her essay, “Are Women Human?”

Some EEWC members will be interested to learn how that many recent conservative gender commentators, including both James Dobson and Elisabeth Elliot, have used biological analogies almost as much as Scripture in defending their views about appropriate roles for women. Dobson, according to Gallagher, bases much of his argument on the evolutionary-based sociobiology perspective.

Some EEWC members will enjoy seeing themselves described along with other “egalitarian evangelicals” (whom Gallagher finds constitute only 5 to 10 percent of all evangelicals). Gallagher describes our newsletter editor, Letha Scanzoni, and her key role in articulating the gender egalitarian position. (Unfortunately, the biographical details aren’t quite right. Gallagher has Letha as a graduate student in sociology — instead of being a young writer married to a sociologist — at the time of her first ground-breaking articles in Eternity magazine during the 1960s.)

Readers interested in on-going debates in sociology will enjoy Gallagher’s critique of the accommodation and secularization theses, and in particular the recent interpretations of evangelicals advanced by James Davison Hunter and Judith Stacey. Of further interest will be her effort (following William Sewell) to portray the dynamic relationship between human agency and social structure.

What I probably liked best were her efforts to provide a sympathetic portrait of women whose religious views differ from my own. Gallagher adopts a very even-handed and respectful view towards both gender “progressives” and conservatives. Borrowing from sociologist Ann Swidler, Gallagher suggests that religious beliefs and ideals exist as “tools” in the cultural toolboxes we all carry. Our boxes contain many tools, not all alike. Gallagher observes that the cultural tool kit of evangelicals (including both historical traditions and Scripture) is actually far more diverse than is often assumed. Important to the toolbox analogy is the idea that people actively choose whatever beliefs in their toolbox are most useful at a particular time. So, as society and times change, the potential remains for people to begin using tools different from those used before. The concept seems an apt one for describing the varying uses of Scripture by Christians and for providing hope for change in the future as well.