Home Book Reviews Eve’s Revenge: Women and a Spirituality of the Body 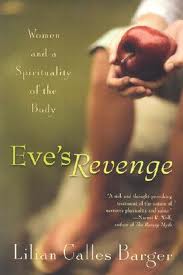 Who needs a body? All I need are fingers to work the keyboard and eyes to read the computer screen, and I can spend most of my waking hours in an entirely fleshless world. I can go places my body will never visit through books, and I can call friends I’ll never meet face-to-face on the telephone. Yet I am constantly reminded that my identity is directly tied to my corporeality – being female, being White, being heterosexual, and being fat are only a few of the physical characteristics that define my experience of reality. Lilian Calles Barger’s book Eve’s Revenge: Women and a Spirituality of the Body reminds me that the female body is also an important site of spiritual identity.

Then, Barger attempts to draw spirituality and the female body closer together. The second half of the book describes how spirituality can be found within and expressed through the body. For example, Barger explains that the physical human experience of hunger, thirst, and sensual pleasure is the “wisdom of the body” which points our attention toward God. Hungering for food and thirsting for water express our hunger and thirst for connection to the Divine. We experience pleasure and beauty through our senses so that we might understand that true pleasure and beauty are rooted in the experience of God. Our blood relationships remind us of the kinship and obligations of ekklesia. Our sensations of pain are ways the body grounds us in the present, just as God is always “in the now” with us.

Starting in chapter six, Barger moves from ambiguous references to “spirituality” to explicitly Christian imagery of the body. Of course, she is particularly interested in Jesus’ incarnation as a corporeal human: being born to Mary of Nazareth, healing the sick, experiencing temptation and suffering, drinking and eating at the Last Supper, being washed and kissed by believers and betrayers, and undergoing physical death and resurrection. As before, Barger finds connections between the embodied life of Jesus and her female readers. Women are created as imago Dei, she writes, and should respect the spiritual importance of the physical form through Christian rituals like anointing with oil and laying on of hands.

Barger wishes to unite feminism, Christianity, and women’s bodies in reaction to her readings of post-Christian feminists: “I was reminded of this need to put flesh on spirituality by feminist thealogianswho expressed a rejection of the Judeo-Christian tradition due to what they perceived as its male-dominated anti-body message. . . . I knew I could not stop where the thealogians stop” (193, emphasis in original). I would be curious to hear how Barger might dialogue with the members of EEWC, who have been directly addressing the integration of Christian feminism and corporeality for three decades.

I suspect that part of our dialogue together would involve some disagreement. Although Barger continually writes with the pronouns “we” and “us” in an essentializing gesture to include all women, she is fearless in expressing her opinions on issues that genuinely divide women of good will. For example, she seems puzzled by someone who challenges her traditional gender schema:

[A fellow participant at a feminist conference panel was] a bisexual whose gender identity seemed to change with the direction of the wind. The bisexual described how some days she felt butch and slicked back her short hair and wore boy-cut jeans and T-shirts, while other days she felt femme and wore sexy dresses, high heels, and full makeup. I could see that it was all in the attitude. Her gender performance – and it truly was theater – changed based on whom she happened to be involved with at the time. It appeared that some people brought out the butch while others brought out the femme. I wondered whether there was a real person under all this and whether relating to her would be like having a relationship with a phantom. (55-56)

Moreover, Barger labels androgyny as an “obscuring [of] the true nature of oneself” (140) which is an “assault on the female body” (25); drag as the “mocking of gender” (141); and same-sex relationships as contributing to the “frayed edges” of community (73). But each of us enacting the theology of the Evangelical and Ecumenical Women’s Caucus in our own way demonstrates that Barger’s conclusions are not the only ones that can be drawn when women’s bodies, Christianity, and feminism are united.

The margins of my copy of Eve’s Revenge are filled with my ongoing responses to Barger’s approach to a spirituality of the female body. I have come to realize that regardless of whether I am agreeing or disagreeing with her, she has engaged her reader with provocative arguments. I can react to the author’s ideas in these disembodied media of books, articles, and web pages, but the two of us do share the hope that Eve’s Revenge will inspire more flesh-and-blood interaction between women in the future.