Home Book Reviews Existential Reasons for Belief in God: A Defense of Desires and Emotions... 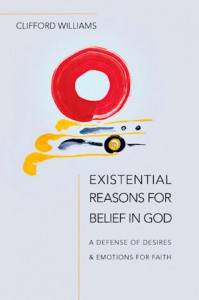 How should a Christian understand her faith? Through a detached, and so-called “rational,” perspective? Or is faith “merely” emotional? Or some third way?

Faith, says Clifford Williams, is an emotion , but emotions are often misunderstood as detached from reason. Williams’s mission in this clear and well-argued book is to explain how faith is motivated and existentially justified by need, emotion and reason. “Need without reason is blind, but reason without need is sterile” (p. 12). Like a good deal of good philosophy, reality lies between the extremes, in this case, between the extremes of emotionalism and rationalism.

Two things stand out from among the many interesting and valuable points made in this book. First is Williams’s use of personal accounts of faith and struggles with faith. Most chapters contain stories by real, embodied people. Too much philosophy appeals to the abstract, the distanced, the detached. Williams brings his theory into the concrete by discussing a number of existential accounts of faith and its struggles.

Second is Williams’s important distinction between those needs (what some might want to call “desires”) that are self-directed and those that are other-directed.

“This distinction challenges the common idea that those who believe in God because of need do so only for the satisfaction of self-directed needs, that is, that they believe in God only for what they can get from believing.” (p. 21)

Many, if not most, discussions of the argument for faith in God based in the emotions or needs of the human person are swamped by the Freudian account of religious faith as an extension of our selfish needs, thus vitiating the value of the argument. Williams’s distinction frames the question in quite different and helpful terms.

“1. We need cosmic security. We need to know that we will live beyond the grave in a state that is free from the defects of this life, a state that is full of goodness and justice. We need a more expansive life, one in which we love and are loved. We need meaning, and we need to know that we are forgiven for going astray. We also need to experience awe, to delight in goodness and to be present with those we love.
2. Faith in God satisfies those needs.
3. Therefore, we are justified in having faith in God.” (p. 32)

The conclusion here is not that God exists but that we are justified in having faith in God. This distinction is an important one in that Williams takes care to distinguish existential arguments from evidential arguments. The former do not necessarily argue for the truth of a claim whereas the latter do. Rather, the former help to move us to live a certain way, in this case, in the way of faith.

Another important feature of Williams’s book is that an existential argument, although facing a number of challenges, can be bolstered by understanding how emotions are not simply detached from reason. Indeed, emotions are, in many cases, cognitive. Emotions, argues Williams, are “construals;” that is, an emotion is a way of seeing things. If I feel pity for my friend who has lost his wallet it is in part because I construe the situation as one in which he has lost his identification and other valuables. If, however, I discover that his wallet only contained his library card, my pity quickly dissolves. Emotions have a clear cognitive component and that puts them into, at least partly, the realm of evidence. Some emotions are good and well-founded, others are not.

A final point about Williams’s book is this. One of the major struggles for feminist thought and action is the attempt over the last 40 years to understand what it means to be a woman and what it means to be a human. So much of the history of philosophy and theology is filled with a “male” construal of human essence, largely consisting of the disembodied and detached notion of the “rational” person. This book goes some distance toward a more whole account of the human, an account that in many ways is feminist. I applaud Williams for his efforts, and although not stated as the burden of the book, the fact that it presents a more whole picture of the human person and the Christian faith makes it a book of value for feminists, Christian and otherwise.

I highly recommend Existential Reasons for Belief in God as a clear, well-presented and insightful work that could provide a framework for further helpful work in living the Christian life and being a Christian and a feminist.