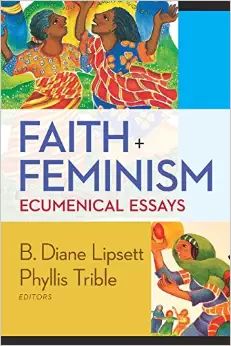 I try to avoid writing reviews of books that consist of a collection of chapters contributed by various authors because they are often hard to do. This book was no exception!  But, in this case, I allowed a good friend (Reta Finger, CFT’s book review coordinator) to twist my arm.

Faith & Feminism is an apt title for this compilation of essays.  The content of the chapters is as diverse as the title suggests.  The editors organized the chapters into three sections:  biblical studies, interreligious ventures, and theology and ethics.

The common connection is that each of the authors originally presented the content of these essays at the Phyllis Trible Lecture Series at Wake Forest University School of Divinity between 2003 and 2013.  Another commonality is that they all identify themselves as feminists.  Since feminism is such a contested term, editors Lipsett and Trible offer their definition which is advocacy of “the full humanity of female and male (6).”  Not surprisingly, themes such as embodiment, dualism, sex and gender, postcolonialism and religious other appear throughout the book.  The editors appropriate the story of the Tower of Babel and the account of Pentecost to describe the collection of fifteen essays written by women who embrace Islam, Judaism or Christianity. The authors live in nine countries on five continents.

The editors provided a helpful, detailed overview of each essay.  It might have been the editors’ specific input or a fortunate coincidence but the authors of each chapter clearly stated the intention of their chapter and furnished good summaries.  This book can easily be read on a chapter-by-chapter basis, in no particular order, since there is no explicit progression from one chapter to the next.

Connections Between Feminism, Religion, and the Greek System