Home Link of the Day Blog Feminism Is: Shannon Watts— Taking on the NRA

Shannon Watts is the Indianapolis mom who heads Moms Demand Action, a grassroots organization created in the wake of the Sandy Hill shootings to promote gun control initiatives.  In the last two years the organization has grown to be a force powerful enough to worry the NRA.

Recently the NRA blocked Shannon Watts on Twitter.  Shannon tweeted it out. 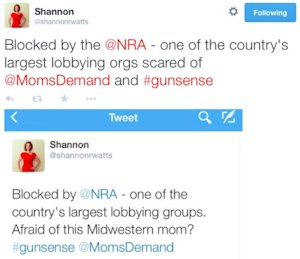 Shannon answered back with these words, “Bring it. Not scared. Won’t be bullied.”

Read this Salon interview with Shannon, “The NRA is losing: Moms Demand Action’s Shannon Watts on what the media’s missing on guns.”

Read this Mother Jones article, “How the NRA Degrades and Objectifies Women.”