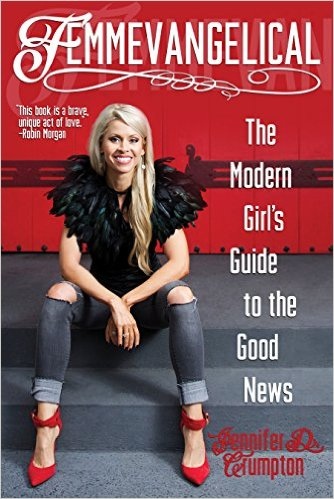 The well-worn adage applies: Don’t judge a book by its cover.

Every time I picked up Femmevangelical by Jennifer Compton, I had to get past the cover art, an image that depicted a woman in skinny jeans, high heels, and some kind of feathered top. Does today’s “modern girl” hold these wardrobe choices as a positive image? Who is this woman? Then I wondered if, perhaps, I was not the target audience (being well past the age of “girl”), so I showed it to my progressive, feminist daughters. They were skeptical, too.

That said, once you get past the cover, there are some hidden treasures inside. Crumpton writes from a strong, progressive Christian perspective. She has coined a new word to describe the archetype she promotes, “femmevangelical,” a mash-up of “feminist” and “evangelical.” She brings an honest voice, one borne out of the experience of attending a conservative church that presented the Divine only in a male voice and with a male perspective. Her questions were not welcome. Her longing to serve in the Church beyond prescribed roles was not fulfilled.

Like many women today, she struggles with the “gender-negative” baggage that stops many from seeking to grow spiritually. Her focus is now on reframing “the big three: the Bible, church doctrine, and male hierarchy,” bringing to light what has not been said or acknowledged in the past. She challenges the reader to move past the stereotypical actions and expectations. Women do not have to be passive, flirtatious, and manipulative femme fatales. Men do not have to be aggressive, dominant, and sexually driven. This runs counter to the cultural norm that “sex sells.” Crumpton acknowledges that it is a daunting task.

She writes: “We crave a spiritual home that we are also compelled to avoid, because traditional religions teaches that our faithful use of female power involved giving it up to God, also known as giving it over to the preference and authority of men, or men by way of female gatekeepers . . . who have been trained to uphold male dominance” (p. 13). She envisions a Christian model that celebrates and uses the gifts of all, male and female, outside of the gender constructs of American culture. She sees all  “evangelical” women as equal message bearers of the Good News.

The book offers seven reflections on Christianity from the feminist perspective: “Finding Your Femmevangelical”; “A Modern Muse”; “‘In The Beginning’ Gets a New Ending”; “Trust and other Lies”; “The Pinnacle of Womanhood”; “Being is Believing”; and “She’s Got the Whole World in her Hands.” Each chapter ends with a devotional, and each one poses some thoughtful and intense personal application questions.

In the chapter “The Pinnacle of Womanhood,” Crompton tackles the difficult issues around hierarchical church government and “God-talk” inherent in the ways we organize and express religion. There is a thoughtful reflection on “power-over” and how we allow cultural definitions of power and piety to supersede our views of God. This is an historic struggle throughout the birth and growth of the Christian church, as she aptly summarizes. Still, the questions she poses at the end of the chapter require one to grapple with issues of oppression and repression in a “power-over” structure. As a woman personally called to ministry in the Church, I took to heart the reminder that we are servants first of God, and then of our congregations, not as much “leaders” as servants. Also in this chapter, she reminds us of Sophia Wisdom, the feminist expression of God from antiquity, one that has been de-emphasized and even erased from the pages of modern Bibles.

Crumpton offers an image of Christian femininity as one that is boundless and freed of cultural rule. She describes a faithful witness that has a vision with “freedom, equality, and wholeness, and being committed to acting upon and bringing into reality the future you so clearly see” (p. 146). I applaud her vision and the challenge she offers us. I even accept that my initial revulsion of the book’s cover art was a reaction to my personal and cultural stereotyping of her clothing (something I’m not particularly proud of, but have enough integrity to admit!).

As the unknown author wrote: “Here’s to strong women. May we know them. May we be them. May we raise them.” I join Ms. Crompton in our ongoing task to do just that, femmevangelicals, all of us.

Femmevangelical offers an image of Christian femininity that is boundless and freed of cultural rule. Click To Tweet