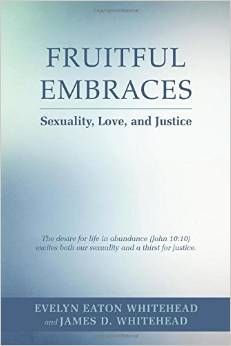 “Sister Monica” is the pseudonym of a Catholic nun who for years has devoted her life to ministering with transgender people.  I respect her tremendously.  So when she gifted me with this book, I knew it would be very significant – especially now, as the Catholic community continues to face major crises concerning bodies, sexuality, and gender.  How to make amends for priestly pedophilia? Should women be ordained?  Should priests be permitted to marry?  Can married people use birth control devices without blame? How can the church honor the presence of disabled or undocumented people?  Should LGBT’s be welcomed into the community?  Topics can’t get much more urgent than these.

Then I noticed the distinguished careers of the authors. Evelyn Whitehead is a University of Chicago developmental psychologist whose focus is adult spirituality.  Her husband, James Whitehead, is a Harvard theologian who studies the integration of religion and culture.  Working together for over 45 years, this team of “cradle Catholics” is perfectly suited to bring biblical imagination to bear upon the body-related crises of the church.

I was particularly struck by the authors’ clarity concerning the major body-identified split in Christian theology, a split that dates from the watershed year of 391 C.E.  In that year the Emperor Theodosius shut down all religious competition to Christianity by banning public sacrifices. Gregory of Nyssa argued that all human beings reflect God’s goodness at their core, and Augustine of Hippo began his career by teaching that all human bodies carry the guilt of original sin.  Clearly, after the Great Schism of 1052, the Western church lost sight of Gregory’s belief in the divine image and became engulfed in Augustine’s doctrine of original sin.  But the Whiteheads favor the vision of Gregory of Nyssa, who believed that all humans, imbued as they are with an indelible image of their God, will ultimately and mysteriously be brought into a final eternal union with their “loving Center” (p. 111).

People who believe in Gregory of Nyssa’s vision are free to welcome all kinds of “outsiders” into the church. The Whiteheads use the Bible’s “dianetic parables and compelling images” to show that all the “others” – “all those who make us uncomfortable – are included in the family of God” (p. 182).  They reframe the concept of fruitfulness to include all “acts of care and compassion” (p. 97), refusing to limit the term to biological procreation.  They uphold male–female equality within heterosexual marriage, rejecting Pope Pius XI’s 1930 statement that such equality is “unnatural.”  And they support marriage equality for gays, lesbians, bisexuals, and transgender people.

Understanding that many people are bewildered by the gender diversities of people whose bodies do not match their internal sense of their own maleness, femaleness, or in-between categories, the Whiteheads are fairly thorough in their explanations of transgender terms, issues, and life-experiences, including transsexuals, cross-dressers, intersexuals, and folks born with androgen insensitivity syndrome.  They explain the importance of the American Psychiatric Association’s shift from the term “gender identity disorder” to “gender dysphoria,” the latter term recognizing the intense distress of transgender people but removing the stigma of an implied character disorder or mental illness (p. 170).  Emphasizing the “extravagant paradoxes found throughout scripture” (p. 176), they point out that in human life, “biology is not destiny” and “gender identity is not a conscious decision” (p. 166).

The authors recognize that for Catholics, who live within “an institution… wedded to historical precedent” (p. 185), it can be terrifying to be challenged to make moves never made before.  Yet many Catholic Christians, “their imaginations shaped by biblical convictions, see immigrants, homosexuals, and transgender persons in a new light” (p. 186). Such believers, including the Whiteheads and this reviewer, are praying that the institutional church will find its way through these impasses.  Let us hope that the Vatican and people worldwide will heed this call toward more fruitful embraces.