Home Book Reviews Gather into One: Praying and Singing Globally 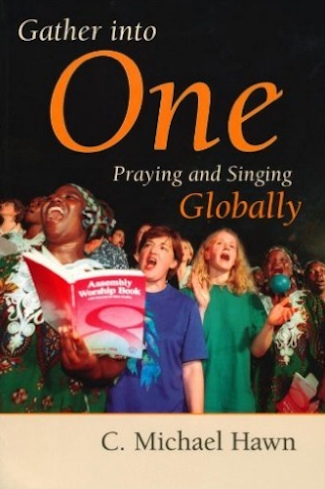 What in the world is happening to congregational song? Author and musicologist Michael Hawn seeks a literal answer to this question, conducting an excursion into global hymnody that ranges from Argentina to Zimbabwe, by way of South Africa, Scotland, and Taiwan. Like world travel itself, Hawn’s book is most gratifying when taken at a leisurely pace. Too rapid a reading, whipping through chapters, countries, and musical contexts on the order of “if it’s Tuesday, this must be Belgium” defeats the purpose of the exploration. Hawn’s intent is not faddish ethno-tourism, but deep and lasting intercultural exchange.

Since the late 1970s, new editions of denominational hymnals have made a point of incorporating global hymnody, including songs like “Siyahamba” and “Canto de Esperanza.” Some of us who plan worship may bravely use one or two such works a year, in a service for Pentecost or World Communion Sunday, knowing that we will later receive criticism from our congregations for “unpronounceable” words or unaccustomed rhythms and harmonies. Hawn’s book urges us to be far more venturesome — for profoundly incarnational, eucharistic, liberatory, and eschatological reasons.

First, Hawn claims, singing global hymns is incarnational. God’s unique hallowing of human life through the person of Jesus Christ occurred at a particular moment in history within a particular culture. We show our own respect for such particularities when we recognize the differently embodied musical idioms that are indigenous to various cultures around the globe.

Second, singing global hymns is eucharistic. Hawn’s title, in fact, comes from the early third century eucharistic liturgy of Hippolytus. Invoking the Holy Spirit to bless the elements of bread and wine, the ancient prayer continues: “Gather into one all those who share these sacred mysteries.” If we are genuine when we liturgically express our desire “to join . . . our voices . . . with all the faithful of every time and place” in singing the glory of God’s name, we should at least be willing to learn one another’s actual songs!

Third, singing global hymns is liberatory. The celebration of diverse musical cultures gives a voice to previously voiceless peoples, and visibility to the previously invisible. Among members of minority groups, the act of singing together has long served to build community and sustain hope in the face of oppression. Within majority cultures, too, Hawn insists that the fashioning of worship constitutes a political act. If we are not actively including the songs and prayers of people from around the globe, then we are effectively excluding them from our consciousness, whether by our ignorance, arrogance, or apathy.

Finally, singing global hymns is eschatological. Even as we yearn for the day when there will be no “aliens or strangers” but all people will be welcomed around the banquet table of the Lamb, so we glean a foretaste of that day when we join in singing together — as Africans, Asians, Latin Americans, and Euro-Americans; not just with harps, trumpets, and pipe organs, but also with marimbas, bamboo flutes, and drums.

Fortunately, Hawn does not simply leave us with the arguments for why we should learn the hymns of other peoples and cultures. He also offers specific suggestions for how we can go about doing so. Each of his five chapters is devoted to a particular musical culture and mentor — Pablo Sosa in Argentina, I-to Loh in Taiwan, David Dargie in South Africa, Patrick Matsikenyiri in Zimbabwe, and John Bell in the Iona Community of Scotland. From these cultures and mentors, Hawn provides printed examples of hymn texts and tunes, with notes on their social and political background and recommendations for appropriate “performance practice.” To make the most of these chapters, it helps to be able to read music, to know something about rhythms and intervals and chord progressions. (Much of the book, indeed, is geared for professional musicologists — but Hawn gives gracious leave for more “amateur” readers to skip lightly over such materials.) Of even greater help would be to participate in a live hymn festival devoted to global song: Hawn himself conducted memorable sessions at the Hymn Society annual conferences in Winston Salem, NC, in 2002, and in Halifax, Nova Scotia, in 2003. The visual experience of reading about singing, after all, stands as a pale substitute for the full-body experience of chanting, swaying, clapping, and dancing in the aisles!

Hawn would, of course, be the first to agree. He speaks frequently of the difficulties in translating oral musical traditions into written forms. He advocates the role of an “enlivener” to lead congregations, personally and persistently, beyond our zones of comfort into embodied singing and praying for the world. Ultimately, Hawn concludes, the point of engaging in multicultural musical expressions “is not to ‘feel good’ but to feel again — feel a sense of the holy and an experience of community” which will move us, with all our sisters and brothers around the globe, to shout in renewed, “polyrhythmic” enthusiasm: Alleluia! and Amen!