Home Book Reviews Gender, Ethnicity, and Religion: Views from the Other Side 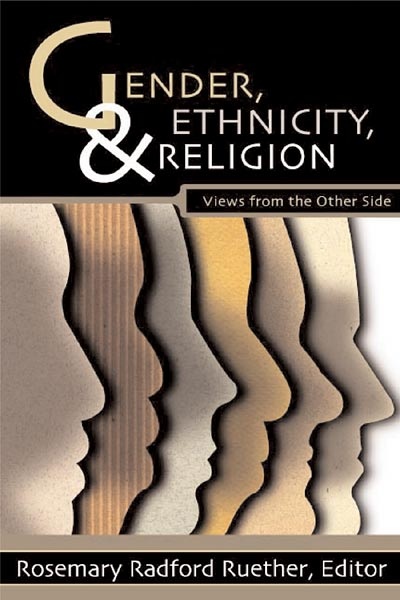 Rosemary Radford Ruether has demonstrated her leadership in Christian feminism by mentoring the next generation of theologians in her new book, Gender, Ethnicity, and Religion: Views from the Other Side. Each chapter of this anthology spotlights exciting new religious research from the doctoral dissertations Ruether has guided at Northwestern University and Garret-Evangelical Theological Seminary.

The chapters are clustered into three sections focusing on the past, present, and future of work at the intersection of gender, social justice (with an emphasis on race), and the church. The key to what unites these discrete essays can be found in the book’s subtitle, Views from the Other Side: Ruether is emphasizing the various perspectives within churches that do not enjoy privileged positions of study in academic departments of religion or theological seminaries.

In chapter 1, Jacqueline Battalora examines how the social construction of whiteness creates a gulf which makes a connection between races nearly impossible. When nonwhite people are the only ones considered to possess a race, the social domination of whiteness is erased from our perceptions and reinscribed into American culture. Battalora proposes a “critical white racial ethics” that dismantles this race hierarchy.

The privileging of alternative racial perspectives is extended in Rosalind F. Hinton’s chapter on early 20th century musician Alma Lillie Hubbard. Hubbard achieved the status of “black middle class” in part thanks to the mechanisms of support in her community: family, church, college, and travel. Hinton theorizes that the lessons Hubbard learned in her New Orleans community raised this African American woman out of poverty in an era of crushing prejudice.

Elaine Caldbeck studies Pauli Murray, an African American woman with many identities including Episcopal priest and civil rights lawyer, whose philosophies of race, gender, class, and religion are best expressed in her poetry.

Part 1 closes with “The Lunch Counter Struggle, 1960-1963: Women Remapping Boundaries of Race, Gender, and Vocation” by Barbara R. I. Isaacs. Isaacs compares the female activists from Bennett College, a historically Black women’s college, with the White lunch counter protestors of Randolph-Macon Woman’s College. She concludes that the Bennett women were encouraged to succeedbecause of the leadership of their college, whereas the Randolph-Macon women succeeded in spite of their college administrators.

Part 2 begins with S. Sue Horner’s recounting of a struggle within EEWC’s own history, which, because of its special interest to our readers, will be described in a separate section below.

An international tone is set in the second piece in part 2. Jocelyn Eclarin Azada focuses on the families of Filipino Americans in diaspora. She addresses both the economic influences on immigration and the implications for gender roles in the Filipino family.

We then move from the Philippines to Belize, where Barbara Flores writes about the dugu ritual of the Garifuna people. This ritual of healing, celebration, and kinship strengthens the Garifuna sense of relationships and communal identity, which nurtures the soul in the face of colonization.

Margarita M. W. Suárez presents Cuban Protestant feminist theology and tells the stories of female pastors Davila, Rosa, Magdalena, and Lea. As an ethnographic researcher visiting Cuba for the first time, Suárez weaves in her own story as well.

Moving on to part 3, “Womanist Theology as Counter-Narrative” by Patricia-Anne Johnson explores womanism in response to the sexism of Black theology and the racism of White feminism.

The theory that people who have disabilities are exiled from church communities is advanced by Kimberly Anne Willis. She submits postmodern feminist Christology as a means for incorporating disability into the Body of Christ.

I was most moved by Rita Lester’s chapter addressing the intersection of racism and environmentalism. She profiles an ecological justice corrective that can be performed by ecofeminists interested in attracting diversity in the environmental movement.

The end of part 3 is similar to its beginning, featuring the theme of womanism. Stephanie Y. Mitchem talks about the expectations of healing, saving, mediating, and reconciling projected onto Black women. Reconciliation carries religious connotations, and Mitchem asserts her conception of racial reconciliation as a holistic theology of womanism.

The chapter that will be of special interest to readers of EEWC Update is chapter 5 in part 2: “Trying to Be God in the World: The Story of the Evangelical Women’s Caucus and the Crisis over Homosexuality” by S. Sue Horner. Horner completed her dissertation in the history department at Northwestern University in 2000, and adapted her doctoral work for this chapter in Ruether’s anthology.

First, she divides the thirty-year history of EEWC into five segments: birth (1973-1975), institutionalization (1975-1984), adolescence (1984-1988), reorganization (1988-1994), and reimagining (1994-present). She details the theological and sociological characteristics defining each time period, which serves to contextualize her focus on “the schism” during the “adolescent” era of the organization.

A resolution addressing the issue of homosexuality first introduced at the 1984 Wellesley conference, and especially the resolution passed at the 1986 Fresno conference, led to a watershed moment. That watershed, occasioned by the organization’s resolving its “firm stand in favor of civil rights protection for homosexual persons,” has shaped the Evangelical and Ecumenical Women’s Caucus ever since. A large number of members left the organization after Fresno, and those remaining were forced to take up the task of redefining the group.

In light of this dramatic turn, it is not surprising that the Evangelical and Ecumenical Women’s Caucus, including the implications of the so-called “Fresno crisis,” has been the subject of several doctoral dissertations throughout the past thirty years. (My own, “How Interpretation becomes Truth: Biblical Feminist and Evangelical Complementarian Hermeneutics,” was completed in 2003). But from her standpoint as EEWC’s historian and archivist, Horner is in a special position to tell her version of the story from the perspective of a long-time EEWC insider. Such a telling by our own historian helps shape our story proactively so that it is not shaped for us by outsiders.

Horner is careful to avoid getting personal, though, or overreacting to the changes in the biblical feminist movement. She grounds her history in public documentation of the events, such as articles from EEWC Update and the responses in local newspapers and Christianity Today, bolstered with primary sources from the archives of EEWC at Union Theological Seminary in New York and her personal interviews conducted for the dissertation (archived with the EEWC papers).

Reading this chapter in Gender, Ethnicity, and Religion left me longing for the publication of S. Sue Horner’s book-length history of the Evangelical and Ecumenical Women’s Caucus, forthcoming from Henderson. A great deal of what it has taken me five years to piece together by asking questions and reading back issues of EEWC Update is synthesized here by Horner into one convenient narrative.

Horner hints at the rich behind-the-scenes stories and swirl of personalities underlying the official events of 1984 and 1986, and rightly indicates that there is more to the story of EEWC than just “the schism.” On the other hand, if others insist on defining our organization by the “crisis” created by the resolution on homosexuality, we could do worse than be identified with standing up for inclusivity and acknowledging that gender cannot be isolated from the interlocking structures of sexual orientation, class, race, age, disability, and other oppressions.

Rosemary Radford Ruether’s anthology is promoting exciting new research that challenges dominant theological identities, especially S. Sue Horner’s work on who we of EEWC were during each stage of the organization’s development, and how that history shapes who we are today.