Home Book Reviews God and the Gay Christian: The Biblical Case in Support of Same-Sex... 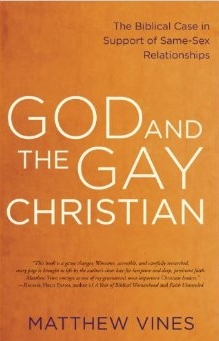 In all honesty, I must begin by admitting my surprise that Matthew Vines writes as if his is the first evangelical and Bible-respectful defense of same-sex relationships and marriage. Back in 1978 Letha Dawson Scanzoni and I published exactly such a book entitled Is the Homosexual My Neighbor? A Positive Christian Response. At that time, our lives were in danger: Harvey Milk, who attended the Harper San Francisco luncheon celebrating our book’s release, was murdered shortly thereafter for being gay. By contrast, evangelical Matthew Vines lives in an era when “nearly two-thirds of millennial evangelicals support gay marriage” (the Washington Post) and the political pendulum is swinging toward affirming marriage equality.  And he has the advantage of dozens of scholarly studies that have poured from the presses since our pioneering book. Matthew Vines provides 33 pages of footnotes citing the more recent scholarship concerning the Bible and LGBT issues, but gives not one single mention to the evangelical book that blazed the trail he is following some 36 years later.

Furthermore, it is customary for a scholar to cite the first scholar who had ever advanced a particular argument concerning the topic at hand. But in his chapter on “The Biblical Argument for Marriage Equality,” there is not a single mention of the ground-breaking book on that topic, written by Letha Dawson Scanzoni and David G. Myers, entitled What God Has Joined Together: A Christian Case for Gay Marriage, published in 2005. Since Vines echoes many of their points, it is shameful that he cites only scholarship published significantly later. And there is no mention of my evangelical description of marriage as a mutual Christ-like self-giving (Women, Men, and the Bible, 1977), or my insistence on marriage as “one flesh” in the 2006 “Speaking of Faith” National Public Radio discussion of same-sex marriage between two evangelicals (Richard Mouw and myself), an interview readily available on Krista Tippett’s On Being website.  Finally, in his brief mention of a “a detailed theological reflection of transgender issues,” Vines cites only Justin Tanis, whose book was published in 2003, several years after my own Omnigender (2001), which covers exactly that territory.

I will not venture any guesses as to why Vines has erased from history the evangelical scholarship that preceded his own.  At first I thought it was because we evangelical forerunners believe in equal partnership as opposed to the right-wing emphasis on complementarity of roles, when the husband decides and the wife submits. But no: Vines agrees with biblical feminists that even in heterosexual marriage, gender hierarchy has been overcome through Christ.  So believers need not fear that gender relationships would be distorted by the egalitarian nature of same-gender marriage.  I can’t help wondering what Christians for Biblical Equality (the gay-rejecting break-off from the Evangelical Women’s Caucus) will do with Vines’ book.  Like CBE, Vines emphasizes that patriarchy has been destructive of truly Christian egalitarian marriage.  But then he demonstrates that the very same patriarchal attitudes that have undermined male-female intimacy have caused the rejection of Christian GLBT relationships. Will the CBE members rise to the challenge?

And, believe me, Vines creates a very solid challenge, with many insightful reasons for Bible believers to affirm faithful same-sex  covenants. He starts with a powerful analogy: just as Christians were forced to change their minds about the solar system, because of evidence produced by the telescope, contemporary Christians are being challenged to reinterpret Scripture on homosexuality because of the mounting evidence that their current attitudes bring destructive results. (So Jesus says, “By their fruits you shall know them”). Vines asks, “Does the new information we have about homosexuality warrant a reinterpretation of Scripture?” And then he provides a ton of evidence to show that indeed, it does.

Throughout, Vines shows that during ancient and biblical times, nobody thought that anybody was exclusively oriented toward their own sex or gender. So modern churches are confronted with this dilemma: “We can embrace gay relationships and maintain a traditional view of celibacy [as a divine calling for only certain individuals], or we can change our understanding of celibacy and keep a traditional view of gay relationships. But we cannot do both.” The point here is that requiring celibacy of gay Christians who are not called to and gifted for celibacy leads to despair and suicide. For as God said in Genesis 2:18, “It is not good for [the human being] to be alone.”

Vines asserts that “Forced abstention from marriage and from ‘unclean’ food is wrong because it promotes hostility toward God’s creation.” And he provides convincing, gay-positive interpretations of all the traditional “flog passages.” For instance, he shows that in Romans 1, Paul was condemning excess as opposed to moderation. For that reason, he explains, up until the 19th century the church consistently identified the moral problem in Romans 1:26-27 as “unbridled passions,” not as the expression of a same-sex orientation.

According to Vines, the reason non-affirming Christians reject homosexuality is that male and female bodies are anatomically complementary (the “plumbing” fits together). But such an issue is never raised anywhere in the Bible. Instead, the Bible makes clear that every human being is made in God’s image, an image which includes the capacity to make covenants and be faithful to them. For the church to continue to oppose same-sex marriage would be to “deny gay Christians the opportunity to sanctify their sexual desires through a God-reflecting covenant.”

Same-sex orientation, being “in keeping with God’s relational, covenant keeping character,” should be understood as “a created characteristic—not as a distortion caused by the fall.” Vines therefore concludes, “It isn’t gay Christians who are sinning against God by entering into monogamous, loving relationships. It is the church that is sinning against them by rejecting their intimate relationships.”

Along the way, Matthew Vines tells some good stories about his own coming out and the experience of other gay Christians and their advocates. And he makes some excellent suggestions for pastors and other Christians who want to befriend the LGBT people among them. So despite my disappointment about the ignoring of Vine’s evangelical predecessors, I am glad to welcome this book and highly recommend it for personal and group study.

Given Up For You: A Memoir of Love, Belonging, and Belief