Home Book Reviews God in Captivity: The Rise of Faith-Based Prison Ministries in the Age... 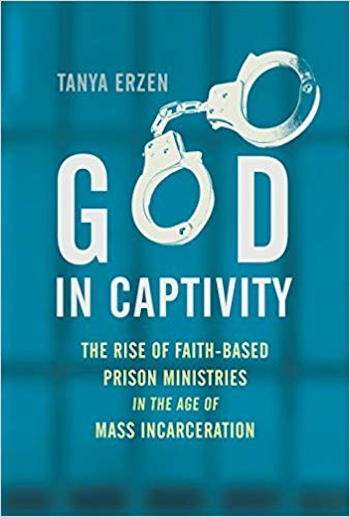 In her book God in Captivity: The Rise of Faith-Based Prison Ministries in the Age of Mass Incarceration, Tanya Erzen offers an intriguing, and somewhat disturbing, description of the connections between religion and the U.S. prison system, both in the present day and through the history of that prison system.

Throughout the book, Erzen uses information from personal interviews with prisoners, wardens, and other prison staff members to give faces and names to the real people impacted by our prison system. Erzen notes early on in the book that early penitentiaries were actually constructed by Quakers, Calvinists, and Methodists because of the “belief that confinement within walls would reawaken the divine in each criminal” (p. 39). From these beginnings, most prisons have focused on a system of redemption and punishment for their inhabitants. One of the most popular ways this has been incorporated is through selective education programs that are run by seminaries and theological schools within prison walls.

These selective programs vary from prison to prison, but the vast majority, according to Erzen, tend to be nonspecifically Protestant in nature and are focused primarily on evangelizing and on pushing an anti-gay agenda. In many of the programs, once prisoners have completed the coursework they are able to travel to other prisons and evangelize even more broadly. Many of the wardens and prison staff members that Erzen interviewed affirm the work of these faith-based ministries because they believe these programs help keep prisons safer, as well as encourage the prisoners not only to monitor themselves and their own behavior but also the behavior of others based on what they consider to be Christian moral principles. For many prisoners, these faith-based ministries can be “the difference between doing time and making a life within captivity” (p. 65).

Erzen also highlights important critiques of these programs. She points out, for example, that “evangelization to a captive population of prisoners inevitably raises ethical and legal matters; it’s a coercive use of power” (pp. 97–98). In addition, the majority of prisons that Erzen includes in this book are located within the U.S. “Bible belt,” where the chaplains and other faith-based volunteers tend to be heavily Christian. As a result, accommodating non-Christian prisoners can be an issue. While prison chaplains are expected to acknowledge the presence of other faith groups, such as Muslims or Jews, they can also restrict funding or meeting times for these groups and cite a lack of knowledgeable volunteers, or some other equally ridiculous claim, to prevent those non-Christian groups the time or space to gather consistently.

Erzen’s book calls on the reader to actively ponder and engage the material she is presenting. She uses the work of religious scholars and prison activists such as Laura McTighe and Norris Henderson to encourage the reader to question their own assumptions about who prisoners really are and what they really need from those of us living on the outside. Erzen calls us to question what the true purpose of faith-based prison ministries are and then address whether we are truly meeting that purpose. We are called to answer the question, “are [we] giving people the help they need or the help [we] think they need?”

This book conquers a deeply important and intense topic, but Erzen’s writing style makes it approachable and easy to digest for any reader. Erzen also does a wonderful job of motivating the reader to do something even after they’ve read the last page.