Seven years ago this May, my husband and I received an email asking if we were interested in adopting a boy, named Do Minh Quan, from Vietnam. The email was both expected, as we had signed with an adoption agency eight months earlier, and unexpected, since we were hoping to adopt an infant boy from India, not Vietnam.

Attached to the email was the picture of an emaciated baby in a gigantic diaper. The boy was hard to place, our agency told us, because of his premature birth, his failure to thrive, and his questionable medical history. Although we tried to make a reasoned decision about accepting Quan as our son, something in the photo spoke to us as other pictures of other children had not. Of course Quan was our child. Of course we would adopt him.

Over the next four months, as we waited for paperwork to wend its way through the United States and Vietnam bureaucracies, I studied that picture and Quan’s scant medical history, hoping to divine who this child—now my son—was. I wondered about his skinny legs, whether they would grow strong. I wondered about the shaved spot on his head where doctors had inserted IV lines for blood transfusions. I wondered who my boy might become. And I prayed constantly that God would protect and love this young child, thousands of miles away—that Quan, without a mother to hold him, would feel God’s love wrapped around him.

Several years later, I turned to the same incantations for our youngest son, Saurabh, then living in an orphanage in Mumbai, India.. We received a picture of Saurabh in January 2004; and despite his sad eyes and worrisome diagnosis of cerebral palsy, we felt again that this boy was to be our son. Agency problems kept us waiting twenty months for Saurabh’s homecoming, and during that time I imagined Saurabh growing from infant to toddler to preschooler, learning to walk and talk, alone in an orphanage full of children. I wondered about our unsmiling child, wondered about the clenched foot we saw in pictures, wondered if he would be able to negotiate our household stairs or attend a regular classroom. I prayed, then, for God to hold my son, so that Saurabh would feel a mother’s love. 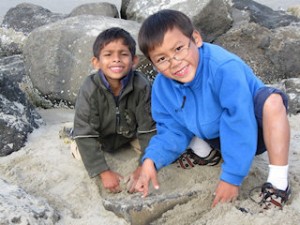 Right now, I can hear Benjamin Quan, seven, and Samuel Saurabh, six, playing baseball in our back yard, negotiating batting rules and ghost runners and what happens when the ball gets lost in our bushes. Ben and Sam are brothers, comrades, best friends, bitter enemies. Both boys love their first grade classrooms and riding bicycles, playing with sticks, watching Spongebob Squarepants and eating candy. Beyond some residual medical issues from their rough starts—Benjamin has poor eyesight, and Samuel, small stature—my boys are healthy, happy, beautiful children.

When they were young and alone, I felt sure God heard my prayers and held each son closely, much as a mother might comfort her children. I am sure God carried my sons through the darkness of their orphanages, using caretakers’ tender hands as physical manifestations of God’s motherly love. I am also hopeful that God directed our children to us, or us to our sons, for I see in our adoptions a miraculous providence that connected me inextricably to two boys, born halfway around the world.

After long, prayer-filled waits, I have been given the gift of motherhood, and this, in turn, has allowed me to comprehend God’s nature in profound ways. I experience biblical metaphors describing God’s love for her children more powerfully now. My children do not bear my genetic code, but this matters not at all: I love Ben and Sam as God loves me, fiercely, overwhelmingly, unconditionally. As God is to me, so I am to my boys; I am as the she-bear in Hosea, the mother hen about whom Jesus speaks, the comforter in Isaiah, and so know God more fully in those terms as well.

And still, the capacity of God’s love is more a mystery to me than ever before. For while I rejoice in the providence of my children and their miraculous presence in my life, I know the gift of my children is premised on someone else’s loss. My sons have lost the opportunity to grow up with their birth families in their own culture. And my sons’ mothers, who gave up their children because poverty or illness or other life circumstances made it impossible to raise the children they bore, have lost the opportunity of watching them grow into adulthood.

We know only a little more about Samuel’s birth family than we do Benjamin’s: we know that Samuel’s first mother was very ill, and that she relinquished her son to an orphanage when he was one week old. Of Benjamin’s birthmother we know nothing, except that her son was near death when he was born at 3.5 pounds, and that she left him at a hospital for extensive care. Despite this lack of information, I am aware—in general terms—of the conditions under which most women in developing countries must relinquish their children: they are poor and cannot adequately feed their children; or they are unwed, and cannot live against traditional societal mores; or they are made ill by impoverished lives, and will die before their children can be raised.

Because of this knowledge—and because I believe God is also compassionate, just, and merciful—I have struggled to understand this paradox: that my joy as a mother comes at great pain to another mother. Much as I love my children, I recognize my position as a woman who is western, white, and relatively wealthy affords me the blessing of motherhood; and that I can understand dimensions of God’s motherly nature because I have been given a privilege my sons’ birth mothers could not enjoy.

I also recognize the losses my own sons will feel, not knowing their first mothers, their first cultures, their first tongues. Because I love my children so fiercely, I am mourning their losses, long before they are capable of recognizing or acknowledging them. Still, I imagine the time may come when Benjamin and Samuel will wonder about their pasts, and I will not be able to give them the answers about their families that they seek, nor the assurances that all is well with those who carried and bore them. 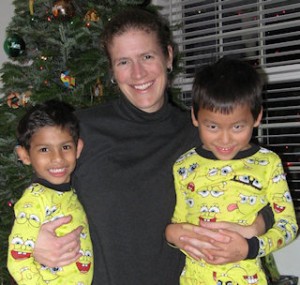 Yet, much as I cannot salve my sons’ own losses, I know, too, that God cannot resolve the paradox that complicates my joy. Certainly I would like to make all things perfect for my sons (and would like God to make all things right for me), but realize such is not possible in this lifetime. So I hold to the insight found in Traveling Mercies. There, Anne Lamott writes of our longing for “permanence, a guarantee or two, the unconditional love we all long for” (p.168), and the inability of receiving that which we so desire. Lamott says she demands assurance from God, but gets only silence. In that silence she realizes the only promise, the only thing in this life not shrouded by mystery, is “the moment, and the imperfect love of people” (p.168). For now, then, I can only hold Benjamin and Samuel up to that mystery, giving them my love because our imperfect world made it impossible for their own birth mothers to do the same.

When I was a child, my mom played a game with us called hen and chicks. Covered by an old blanket, she would spread her arms wide and call out “where are my chicks?” My brother and sister and I would run under her wings, and she would wrap her arms, and the blanket, around us; we giggled in the darkness of her flannelled embrace. Because of this game, the metaphor of God as a hen gathering her chicks has been especially powerful for me, a reminder of my mother’s care for me, and of God’s care for all God’s children: for me, yes, and also for Benjamin Quan and Samuel Saurabh, and for the mothers who once bore them and entrusted them to me. And so I imagine a day when God will gather us all under her wings—including all the people who have been a part of Ben’s and Sam’s lives, from their very beginning—and we will feel God’s warm embrace together, laughing, rejoicing in our imperfect love for each other, and in God’s perfect love for us. 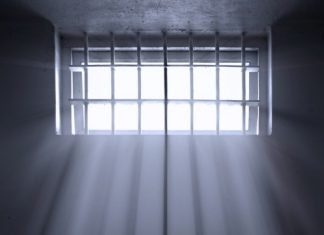 Phillip M. Coons
The function of a governor in granting clemency is to mete out mercy. An insightful article about the Karla Faye Tucker case and other executions in Texas during the governorship of George W. Bush was written by Sister Helen Prejean, the Roman Catholic nun whose story was told in the movie Dead Man Walking.