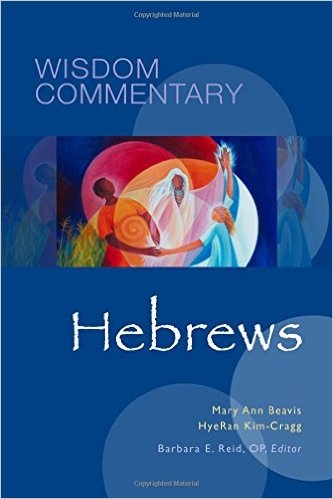 Coming on the heels of magisterial single-volume feminist commentaries like the three editions of The Women’s Bible Commentary and the Feminist Biblical Interpretation: A Compendium of Critical Commentary on the Books of the Bible and Related Literature, this new multi-volume series digs even deeper into the biblical tradition with both outstanding critical scholarship and impressive verve.

As passionate and pastorally sensitive as it is erudite, one of the Wisdom Commentary’s first published volumes is this one on Hebrews by Mary Ann Beavis and HyeRan Kim-Cragg. The choice to tackle Hebrews early on may seem puzzling, since its subject matter is not widely regarded as providing fertile material for feminist theological reflection, especially in light of its extensive passages about blood sacrifices and apparent colonial triumphalism and denigration of Judaism. But in successfully engaging a more difficult text, this commentary demonstrates a powerful and persuasive methodology that will undoubtedly excite readers about the delightful insights that future volumes are certain to provide.

How do they do it? One key, articulated in the “Authors’ Introduction,” is to demonstrate the pervasive affinities of Hebrews with other Scriptures in the Wisdom tradition, including most prominently the Wisdom of Solomon (pp. xl–xlii). The authors acknowledge the irony that Hebrews never uses the word sophia (wisdom), pointing out that Hebrews “is not intrinsically amenable to the promotion of feminist, or even proto-feminist, interests” (p. xliii). Yet they also highlight the “audible, if muted, voice of Sophia in Hebrews” (ibid.) to lay the groundwork for mining Hebrews for feminist theological insights. They go on to write that “the homilist of Hebrews may be called ‘proto-feminist’ by virtue of the inclusion of women in the list of heroes of the faith in Heb 11” (p. lxxxviii), and discuss several proto-feminist interpreters of Hebrews, including English commentator Gracilla Boddington, 1801–87, and Englishwoman Elizabeth Rundle Charles, 1828–96 (pp. xc–xci).

But that’s only the beginning. An even more important key is the authors’ methodology, demonstrating feminist values not only in their arguments but also in their very approach. Most (male-dominated) commentaries celebrate the erudition of individual voices, but this “feminist, multi-vocal commentary” (p. 203) intentionally includes diverse voices from a variety of perspectives, not simply acknowledging, but even celebrating differing conclusions without attempting to play some against others or argue for the superiority of one particular viewpoint. An excellent example is the candid comparison of diverse viewpoints regarding Hebrews 2:6ff on page 21. The unconventional afterword (pp. 203, 204) provides an excellent summary of the authors’ overall approach.

Whose are the diverse voices that are included in the commentary?

Poetic versions of Aboriginal Scriptures in thirteen poems by Marie Annharte Baker, one for each chapter of Hebrews, provide valuable First Nations perspectives throughout. In addition, the commentary features many valuable Jewish perspectives by Justin Jaron Lewis (cf. pp. 25–27; 46–47; 99; 144; 168; 181), as well as insights from Medieval Jewish Kabbalah (p. 89). A cameo essay by Mary Ann Beavis called “Jewish Lists of Heroic Women” quotes the Talmud (Meg. 14a) and another rabbinic text, the Midrash Eshet Chayil (pp. 136, 137).

Particularly thoughtful essays are included from the perspective of an Asian and a Filipina doctrinal researcher of Scriptures in a European university, Ma. Maricel Ibita (p. liv), titled “Interpretive Essay: ‘Christ’s Sacrifice Once for All’: Understanding, Critique, and Reappropriation of the Biblical Social Value ‘Group Orientation’ from a Feminist Perspective” (pp. 108–122), as well as her twin sister, Ma. Marilou S. Ibita, who wrote the insightful “Interpretive Essay: Hospitality: A Two-Edged Sword?” (pp. 189–201), highlighting the plight of Filipina Christian migrant workers.

The authors themselves include insightful essays throughout. In her cameo essay “The Veil in Postcolonial Perspective,” co-author HyeRan Kim-Cragg reflects on the rhetoric of the veil in Hebrews 10:19 by discussing the way in which the Muslim tradition of the veil, traditionally perceived by Westerners as oppressive, has been reappropriated by women as a statement of solidarity against Islamaphobia (p. 126). Equally compelling is her interpretative essay, “Women and Suffering in Korean Feminist Theology” (pp. 131–134), as well as her positive cameo essay about sacrifice and eucharist (pp. 67, 68).

One of the more interesting conventions of the Hebrews commentary is the authors’ reluctance to use the word “Christian” with a capital “C.” As they explain it, since “the term ‘Christian’ was not commonly used in the first century (in the NT it is found only in Acts 11:26: 26:28; and 1 Pet 4:16, referring to followers of Christ, not to devotees of a religion), and ‘Christianity’ did not exist as a religion, the term ‘christian’ will be used henceforth with reference to the earliest members of the kingdom of God movement, including the author and audience of Hebrews” (p. lix, n. 71). This is part of an overall strategy of articulating early Christian identity with respect to Judaism, a welcome concern in light of the historic problem of supersessionism—the teaching that the Church has displaced Israel in the divine program. Addressing this problem head on, the authors write that:

The homilist’s intent was not to argue for the superiority of “Christianity” over “Judaism” but to interpret the community’s experience of salvation history in light of the Jewish Scriptures as mediated through the Septuagint (LXX). Unfortunately, these kinds of arguments have subsequently figured in Christian anti-Judaism, and consequently must be read with caution (p. lxiv).

. . . to call Hebrews ‘supersessionist’ may be an anachronistic imposition of later Christian doctrines onto the text.

Nonetheless, although there was no such thing as “Christianity” as a religion separate from “Judaism” in Hebrews’ time, the charge of supersessionism is warranted to the extent that Hebrews sees the new covenant as superseding and replacing the cultic institutions of the Mosaic order. . . . to the extent that Hebrews as Christian Scripture has figured in the history of Christian anti-Judaism it must be interpreted with care, and anti-Jewish interpretations of Hebrews must be vigorously repudiated” (pp. lxxxiv, lxxxv; cf. pp. 18,19; 85-87; 165,166).

With respect to Christology, this reviewer was particularly impressed by the following insight:

In fact, the consensus that Hebrews expresses a “high Christology” in which the “divinity of Christ” “is emphasized may result from the over-literalization of the highly allusive and metaphorical language of the discourse. From the homilist’s perspective, what Christ does “for us” (the audience) through his life and death is more important than ontological formulations regarding Jesus’ relationship to the divine nature; doctrine is always subordinate to paraenesis (p. lxxvii).

Significantly, with respect to the issue of sacrificial language, this commentary helpfully reiterates the arguments of Christian Eberhart that “The ancient Israelite/Jewish understanding of sacrifice” was not, in fact, focused on divine appeasement and suffering animals, but rather on cultic purification (expiation, pp. lxxviii–lxxix), yet nevertheless concludes that “In feminist terms, rather than attempting to rehabilitate atonement theology, it is preferable to focus on Jesus’ living proclamation of the reign of God instead of fixating on his suffering and death” (p. lxxx). Similarly, in the concluding comments of the Afterword, Mary Ann Beavis writes that:

As argued in the body of the commentary . . . traditional theological associations of sacrifice with suffering, self-denial, death, and abjection are foreign to ancient understandings of sacrificial rituals. For the biblical tradition, including Hebrews, the basic meaning of the Latin term sacrificio, “make sacred,” captures the significance of the ritual better than the English term with its many negative connotations. This means not that sacrifice should be embraced as feminist theological category but that it needs to be understood on its own terms as celebratory and relational (p. 203, emphasis mine).

Two final reflections are worth particular mention. The first is this commentary’s bold willingness to nuance its approach to the text, for example in recognizing that “the alternation of accusations, threats, and expressions of approval in 5:11–6:12 is in keeping with ancient rhetorical technique,” while adding that, from a feminist standpoint, such “coercive and manipulative techniques should have no place in contemporary homiletics” (pp. 63, 64; cf. pp. 129, 130, 182). Similarly, it doesn’t hesitate to articulate poignant criticism of Abraham as “a deeply flawed figure who seems unworthy of his prominence in Jewish and Christian tradition” (cf. pp. 66, 67; 143; 146; but cf. Justin Jaron Lewis’ cameo essay on p. 144). It goes on to problematize Hebrews’ historical narrative from a postcolonial perspective (pp. 152, 153), together with the anticlimactic list of flawed “heroes” in 11:32 (p. 153). Equally compelling is its critical reading of Hebrews 12:5–11 (pp. 160–163).

Nuanced and deeply sensitive in its interaction with the scriptural text, this commentary is outstanding in every respect. The only constructive criticism this reviewer can offer involves nothing more than a simple omission. On page xx, Barbara E. Reid, OP, the General Editor, writes very briefly of the inclusion of men “rightly regarded as feminists” and therefore as “lead authors and as contributing voices” to the Wisdom Commentary series; this in a single paragraph which doesn’t even mention (not even in a footnote) the debate about whether it’s appropriate to regard men as “feminists” proper or rather as “aspiring feminist allies,” “pro-feminist men,” or in other, similar terms (cp. p. lv). This observation is not intended to discount her conclusion outright, simply to suggest that it would have been appropriate to at least acknowledge disagreement on the question.

[Note:  The text of this review was changed after initial publication to correct an error in which Ma. Marilou S. Ibita’s essay was incorrectly attributed to her sister.]

Did Miriam the Prophet Write Down Most of Genesis and the First Part of Exodus?

Is The Bible a Divine Revelation or Human Book—or Both?

FemFaith Authors - August 23, 2012
. . . taking the humanity of the Bible seriously in no way undercuts it message, nor should it result in fear that the Bible will lose its power or meaning if we recognize that people wrote it in specific times and places with specific points of view. Of course. But, this has been and continues to be the dividing line among contemporary Christians.