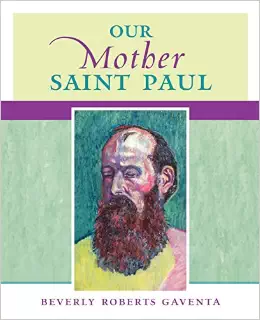 When Dr. Beverly Gaventa examines biblical texts, be prepared for total immersion in a baptism of biblical meaning, this time into the Apostle Paul’s world.  Her incentive for writing the book comes from her realization that “few women have been involved in the scholarly exegesis of biblical texts (30)” and she hopes, as a woman exegete, to enlarge the biblical message.  Her goal is “to listen as a woman and on behalf of women” (p.70).  In Paul’s letters, with their apocalyptic gospel of Jesus Christ, a new world view for women is generated.

Gaventa, the Helen H.P. Manson Professor of New Testament Interpretation and Exegesis at Princeton Theological Seminary, proceeds to use her skills to reveal a carefully detailed exploration of Paul’s letters to the new churches he is overseeing.  The title refers to Paul’s use of maternal language in addressing the congregations, defining himself to the Galatians as one in labor bringing Christ to them, giving birth at last, and then nursing them into maturity.  He uses both maternal and paternal imagery to describe his care and concern for the new body of Christ followers.  Not only does he speak in terms of such imagery for the new churches, but also makes cosmic connections in metaphorically referring to the whole creation in labor for the new life in Jesus Christ.  His use of cosmic and apocalyptic terms for life centered in Christ pervades the letters.

In his letters to the Thessalonian church, he often uses terms related to the nursing of infants in Christ, as nurses might care for children.  He equates the apostles, such as himself, as active in the role of nurses (p.26).

Central to all of Paul’s writings is his not only holding to the practical daily tasks of keeping a congregation faithful to Christ, but also seeing at the same time the cosmic and apocalyptic features that accompany the lives of such a community.  Gentiles as well as Jews make up this new gathering of the believers in Jesus Christ, who lived with his people but was risen as a cosmic figure.  For the church to exist, members must recognize the immense power of being in Christ in whatever they do.

As a Jew, Paul must wrestle with his training in the Jewish law and its power.  He understands that “the law . . . stands in direct opposition to Christ.  One is either justified through the law or through Jesus Christ” (p.105).

Paul often uses the phrase, “God handed them over,” to express the consequences of rebellion against God; and in this regard, God’s role becomes part of a “cosmic conflict” where human beings are left vulnerable to Sin and Death, which are the “anti-God powers” (p.113).  The conflict  affects humanity on the level of all creation in its cosmic and apocalyptic nature.  Gaventa notes that Paul speaks of Sin with a capital S, rather than of evil, and views it as a human condition, whereas “Evil is God’s own enemy” (p.136).

In Paul’s total focus on Christ Jesus, who brings all by grace to redemption, the final act is completed by God now and forever.  And the Gentiles, rather than the Jews, will lead Israel to its redemption (p.156).

Throughout the study of Paul’s letters, Gaventa is attentive to good exegesis of what is written, and is able to gather Paul’s thoughts into that of a concentrated and loving concern for the churches under his care.  His central and overriding principle is that of recognizing the power of Jesus Christ in a twofold manner, that of a cosmic figure as well as one who redeems.  This thoughtful and carefully examined look at Pauline writing provides clarity for the biblical student and for the lay person, and does so through the eyes and words of a woman scholar.  It is well worth having for one’s personal library.