Home Where She Is Blog In the Roar of the Storm 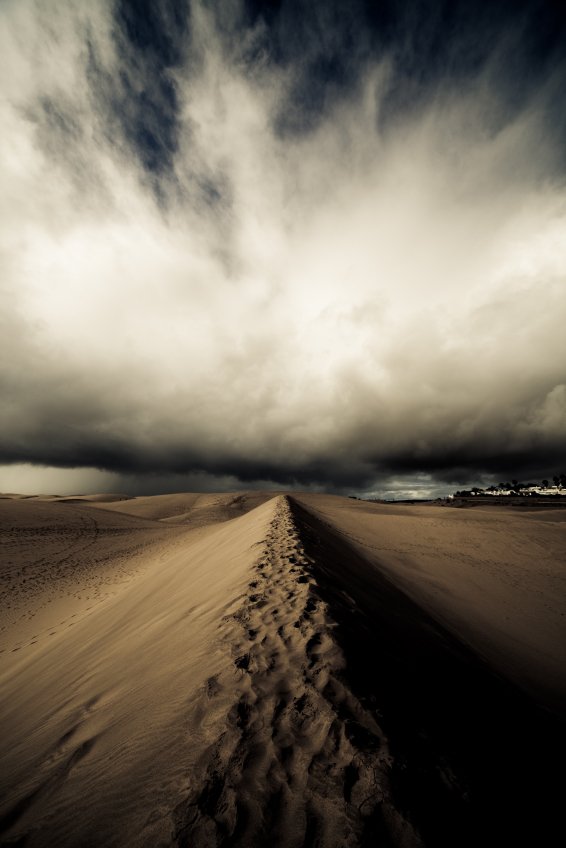 So, I haven’t been writing much. It’s been several months, I know.

I’ve been busy working on our 2014 Gathering, which was awesome. That took a lot of my time. During the last month of planning, there really wasn’t any time to write.

But it’s been longer than that, and there’s another reason I haven’t been writing. I feel some real trepidation telling you about it. But I’ve decided to, because I’m not sure when it will be over, and I miss writing; I miss our connection. Mostly I miss this habit of describing where I find Divinity in my life, describing to you where She is.

I’ve been saying, when asked, that “I am having a rough time.” I’ve been asked if I’m depressed, and I’ve explained that that doesn’t really describe it.

It’s more like I’m standing here watching this person I’ve created over fifty-two years being worn away by a sandstorm. Darkness and stinging, strong winds. A lot of difficulty breathing, grit in my mouth. Forearm over my eyes for protection. Much stumbling.

And though I still can’t be sure about anything except the storm raging around me, I think the layer of me closest to the surface is being sandblasted away.

That layer of me closest to the surface? It seems to be what was holding in all kinds of pain and sadness and anger that I’ve stuffed down my whole life.

I stuffed it all because I thought that’s what good Christian girls were supposed to do. Never talk about the pain of having to act like someone I am not (my gender identity is shameful, something that must be hidden). Never be sad (there are people who have it much worse than I do). Never be angry (women are called to express selfless service, kindness, and understanding, never anger).

At first all those repressed feelings seeped out a little at a time, through small openings. Now they are dripping down my face and arms, staining my clothes and getting all over everything.

Lisa is living her life sopping up the mess while I stumble around trying to keep her back a safe distance, to keep her outta this storm. I’ve not been very successful. She refuses to stand back. I’ve never felt so unworthy of someone’s love, yet I continue to be humbled and grateful every day when I wake up and find a new vase of flowers or an encouraging card leaned up against the pitcher of tea she makes me each morning.

I hope it doesn’t upset you if you saw me recently and I didn’t let on. I’ve got a bad habit of obfuscating my internal emotional life. I’ve been making that a priority for many, many years. I understand that acting like I am fine when I am not may seem like lying to you. Which I guess it is. But I don’t mean for it to hurt you. I’ve been doing the best I can do, and sometimes that comes out as acting okay when I’m not.

Often, being honest about how I really feel seems unfair, as if my struggle and my pain is something that can reach beyond my body and hurt you. I have a conviction that it is my duty to protect you from my unhappiness and, in doing so, I am serving God, you, and the greater good. And while it’s getting easier for me to see the dysfunction and the unintended consequences of this conviction, it doesn’t make it any easier to stop.

So, yeah; where is She in all of this?

At first, I was flailing around with my free hand, the other over my eyes to preserve some kind of sight when this is all over, trying to find Her, or find the place where She might be blocking the wind, offering some shelter. Later, I was trying to catch an arm, or just the edge of Her shirt, to know She was still near.

Sometimes I managed to yell, “Where are You?” Sometimes, a lot of the time, I just cried.

But something’s been happening recently; an awareness has been creeping into the distant edges of me. I’m beginning to realize that She is not standing near me in this.

She is this. She is the sandstorm.

She is the ripping, tearing wind. She is the darkness and the roaring sound. She is the grit in my mouth. The tears that just won’t stop are Hers as much as they are mine.

She is scouring layers from me. She is freeing me from this wall I built over all these years. She is ripping all the loneliness, pain, and anger I’ve been hauling around from my grasping fingers.

And there is fear and shame and more humility than I ever imagined I could feel.

But the storm continues to rage, and I know there is still more to be lost. Because I have not yet learned to do the one thing I must do.

Wild Goose – James Alison Presents “You can … if you...