At  EEWC’s 2008 conference in Indianapolis, as Nancy Wilson approaches the lectern, I hope you will be prepared for greatness.  Not necessarily because of what she will say, although that will probably be wise, witty, and excellent.  But her greatness emanates from her heart, her attitudes, her life, her work, who she is.

Since 2005 Nancy has been the Moderator of the Universal Fellowship of Metropolitan Community Churches – Moderator here being the equivalent in more hierarchical organizations of President, CEO, Archbishop, or even Pope.  There are 250 congregations in 23 countries organized into seven regions, each region mingling more developed with less developed nations, each headed by an Elder (equivalent to Bishop).  Currently the UFMCC is the only international church in which the leadership is predominantly female – not only the Moderator, but the majority of the elected Board of Elders. 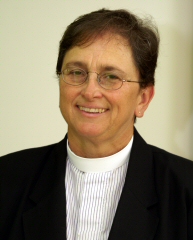 Founded in 1968 by Reverend Troy Perry, the church has a major outreach to gay, bisexual, transgender, and lesbian people as well as other minorities; but many heterosexuals love the denomination’s inclusiveness and are warmly welcomed.  During the 1980s, the church lost some 6000 of its members to AIDS; but that devastation is counterbalanced by the performance of some 6000 same-sex unions/marriages every year.  And although many members have been attacked or murdered and dozens of churches have been burned or vandalized, never anywhere else will you hear a more fervent joyous witness to the fact that “we are troubled on every hand, yet not distressed; perplexed, but not in despair; persecuted but not forsaken; cast down, but not destroyed” (2 Cor. 4:8, emphasis mine).  The first time I ever really heard those words, they were uttered by Troy Perry at a UFMCC General Conference communion service in a huge Los Angeles hotel—recited with confidence as we searched for strange packages under our chairs because the leaders had just received a bomb threat.  It was a stunning, unforgettable moment.

Aside from pastoring and leading the UFMCC in various other capacities, including serving as the liaison with the National Council of Churches, Nancy founded the MCC Conference for Women in Professional Ministry and was active concerning AIDS, the treatment of prisoners, and women’s rights.  She composes exquisite poetry—especially Bird Psalms—and has contributed to a volume called Race and Prayer.  With Malcolm Boyd, she co-edited the 1991 bookAmazing Grace: Stories of Lesbian and Gay Faith.  But her major publication to date is a dynamic book called Our Tribe: Queer Folks, God, Jesus, and the Bible (HarperSanFrancisco, 1995).

In Our Tribe Nancy (who has been a good friend to me for many years) describes a mystical experience she had at her first National Council of Churches governing board meeting in 1982.  Feeling very “small, young, and inadequate,” innocent of N.C.C. politics and “strategically naked,” sitting in the back of a huge church in Nashville, Nancy “sensed them in the room: gay men and lesbians through the ages.  In the churches, banned by the churches, persecuted by the churches, serving the churches, loving and hurting.  They were there.  They knew I was there.  I had this overwhelming sense of a mystical communion of gay and lesbian saints, some of whom had served this council in its better days. . . . The presence of my heavenly tribe sustained me that day” (p. 13).

Nancy describes her horror at Dr. Robin Scroggs’ insistence that there were in the ancient world no mutually consenting adult same-sex love relationships (only pederastic man-boy relationships of which New Testament authors naturally disapproved).  Although some gay Christian leaders welcomed Scroggs’ thesis, Nancy felt it was “somewhat akin to genocide” because she knew in her guts that the heavenly tribe had been in existence then, some of them preceding New Testament times.  And of course scholars like Bernadette Brooten and John Boswell have proven Nancy’s instincts to be both accurate and documentable from ancient texts.

But later, as an MCC delegate observer at the World Council of Churches communion service in Australia (1991), Nancy had an even larger mystical experience.  “Suddenly, proud to be representing my tribe, I was transported to a posttribal reality. . . everything was dissolving.  Especially me.  Never in all my life had I experienced the sense of overpowering connectedness to the earth and all her people. . . . I was a child in a huge family gathering. . . . If I lost my parents, my family, my tribal connections of whatever type, I was still safe in the arms of this extended tribal network. . . . One Body.  One Blood” (p. 22).

Our Tribe contains insightful chapters concerning “Healing Our Tribal Wounds,” “Boldly Exercising Our Tribal Gifts,” detoxing and demythologizing the biblical “Texts of Terror,” “Outing the Bible” by lifting up gay and lesbian tribal texts, “Outing the Sodomite” as anyone who commits ethnic and/or sexual violence, remembering those who have died of AIDS and breast cancer as “Equal to Angels,” and developing “A Queer Theology of Sexuality” that ends with some wonderful speculation.  “What if in our new charter of human existence we come to believe that all people have a right. . . to be who they are spiritually and sexually?  And that all life forms deserve to be respected?  What a powerful millennial vision!  Fortunately or unfortunately, depending on your point of view, this is still a queermillennial vision.  But hold on, our time is coming” (p. 280).  An appendix supplies a roll call of eunuchs in the order of their appearance in the Bible, all 34 of them, from Genesis 37 (Potiphar) to Acts 8, the black eunuch from Ethiopia.  You just haven’t lived until you’ve read Nancy’s exposition of biblical eunuchs in the main text!

Throughout, Nancy’s voice is the voice of a prophet rallying and empowering the humanity in us all.  Although she was writing Our Tribe before the Transgender Movement became a major social factor, she makes clear that omnigender is a terrific threat to fundamentalists and patriarchs because it proves that God did not invent patriarchy, rigid sex roles, or monolithic heterosexuality.  “There are people (hermaphrodites, transsexuals) who are toward the center of the [gender] continuum, and the rest of us are more or less male or female.”  But immediately she assures us that none of that is the fault of gender-variant or sexually variant people: “God may have indeed made ‘Adam and Eve and not Adam and Steve’—but [if so then] Adam and Eve made all the rest of us!” (p. 120).

Nancy Wilson’s voice seems to me a perfect voice for a conference centered on Wisdom’s table, where there is a place for everyone who wants to sit down.  Bring on the feast! 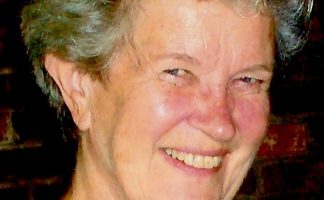