edited by Hannah Faith Notess
Eugene, OR: Cascade Books, 2009.
In the series Experiences in Evangelicalism. 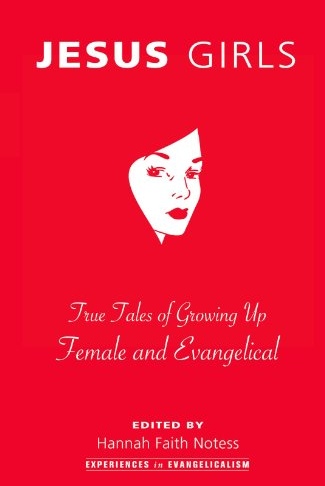 Honesty is what this book has to offer, and in many cases a journey away from the witness-for-Jesus faith that most of the authors grew up with.

One fifth-grader is pulled out of her suburban California life and taken to Cameroon when her parents decide to work for Wycliffe Bible Translators.  She ends her story when she’s in a Christian boarding school where only men preach; women accept “the man’s role to be the spiritual leader.”  Missionaries are requiring their male converts to divorce all wives after the first wife because “that’s what the Bible commands,” and a friend is not wearing makeup or earrings for the same reason—but the writer, Kirsten Cruzen, is losing the kind of unquestioning faith with which she arrived in Africa.

These are women who would be very comfortable in EEWC—and in fact, two of the twenty-two authors are members, Kimberly George and Melanie Springer Mock. Kimberly has attended conferences and co-writes the 72-27 blog with Letha Dawson Scanzoni.  Melanie has written for Christian Feminism Today and our website a number of times.

After sketching her conversion at age 13, Kimberly describes with great humor the “orientation into Christian Womanhood” that went with it. She didn’t want to buy the submission to husbands that was being taught, but she feared, “If I refused it, I would have denied not only my femininity, but God himself.”  Now she is committed to developing her voice and resisting the gender formulas pressed on Christian women.

Melanie recalls the crisis of being a Mennonite from birth and having no testimony to share at the evangelical Christian college she attended: “I had no lurid sins to which I could confess, only run-of-the-mill transgressions like envy and sloth… Somehow, being saved from the clutches of these sins paled in comparison to being rescued from the depths of promiscuity or chemical dependency.”  When giving a testimony became a requirement for staying on the track team, she did what any good storyteller would do—invented one.

The stories are divided by subject matter—worship, community, education, and the like—but my favorite was the section on gender and sex.

“Like other spiritual dangers, intimacy between the sexes was compared to a slippery slope,” writes Shari MacDonald Strong as she recounts her own adventures with a series of boyfriends and where she is today.  It’s a great piece.

Another author describes her journey from pro-life demonstrator through an abortion to being a wife and mother today.

Victoria Moon reflects on how fundamentalist fear of sex and the body resulted in her not learning how to swim for many years.  “I believed I was truly Eve’s daughter, full of the evil of sex, drowning in it.”

The book began as an exploration of the “un-testimony… an unruly story, a story that refuses to conform to a simple before-and-after pattern,” writes Hannah Faith Notess, the book’s editor.

She decided to limit it to women writers because, “First, among evangelical speakers and writers, there are far more men than women.”  Secondly, with the injunction to silence in I Timothy, “testimony has been one of the most common ways a woman’s voice can be heard in church.”  Very feminist thinking!

In fact, this volume is the first collection of personal stories by evangelical women since Our Struggle to Serve, edited by Virginia Hearn in 1979.  There have been a number of single-person memoirs: Susan Campbell,  Linda Mercadante, and others.

The quality of the writing in these stories is unusual in Christian publishing: seven of the authors have earned MFAs in creative writing, and nine of the pieces were published in literary journals before being put in this book.

Here’s a sample from Nicole Sheets:  “We must look awfully Old Testament, I think, like a small tribe washed in wonder as we shuffle by the paschal fire burning on the church’s front steps, tipping our wicks to Christ’s flame.”

So many memorable parts of an evangelical upbringing are humorously and lovingly recorded: the flannel board characters, Bible verse memorization, hymns, Christian rock music, and t-shirts.  Difficult subjects are covered too, such as sexual scandals and learning that “you could fight with your church family as readily as with your biological family,” as Sara Zarr puts it.

Losing one’s childhood faith or seriously reassessing it is an experience common to many of the stories.  Andrea Palpant Dilley writes profoundly on this subject, quoting Czeslaw Milosz, C.S. Lewis, and Flannery O’Connor, who calls losing faith “an experience that in the long run belongs to faith.”  Peter’s “Lord, I believe; help thou my unbelief” is actually “the foundation prayer of faith,” writes O’Connor in a 1962 letter.  I’m grateful to Andrea for discovering and including this quotation.

Most of the authors are in their twenties through forties, and they come from a variety of ethnic and denominational backgrounds.  Getting to know them is a pleasure—I recommend it.

Does Jesus Really Love Me? A Gay Christian’s Pilgrimage in...