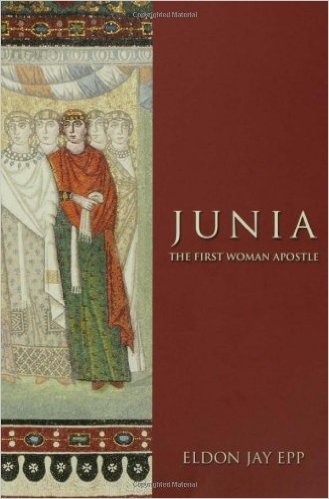 For any woman who thinks that biblical textual criticism is incomprehensible or boring, akin to nanotechnology or astrophysics, you ought to try this book. Besides the voluminous endnotes, indexes, and bibliography secreted in the back, Eldon Epp’s tale of Apostle Junia’s sex changes covers only 81 pages. I know you won’t believe this, but the writing style is so accessible I honestly found it hard to lay down!

The big question that Epp addresses is whether the name IOUNIAN (Junian) found in the Greek text of Romans 16:7 belongs to a man or a woman. Most Christians throughout our history haven’t cared a whit, since few laypeople pay attention to personal names in the letters of the Apostle Paul. But a good bit hangs on this verse, since it reads thus in two modern versions:

NIV:  “Greet Andronicus and Junias, my relatives who have been in prison with me. They are outstanding among the apostles, and they were in Christ before I was.”

NRSV: “Greet Andronicus and Junia, my relatives who were in prison with me. They are prominent among the apostles, and they were in Christ before I was.”

So was this Junias a man who was a prominent apostle, or Junia, a woman? If a woman, Junia’s apostleship opens the door to the highest office in the early church and thus to women’s church leadership of any kind in any age.

Do I have your attention now? A lot is riding on one single name!

Epp’s first chapter, however, discusses textual criticism in more general terms. The original autographs of all biblical documents no longer exist. Instead, for the New Testament we have thousands of copies of copies of copies, no two exactly alike. So the science of textual criticism tries to figure out which among each variant was either the original or closest to it. Epp’s lucid discussion can help laypersons understand text criticism’s delicate dance as both science and art.

But rather than despairing, or arguing for one particular outcome for each word or phrase in question, Epp sees the diversity itself as a window into the early churches’ struggles to interpret a particular tradition. This explains why Jesus’ sayings on divorce in the Synoptic Gospels are not uniform (p 11). Different congregations were confronted with different divorce issues and interpreted Jesus’ teaching about it in diverse ways.

Epp applies the same principle to the troublesome text in 1 Corinthians 14:33b-36, which forbids women to speak in the gathered church but rather to ask their husbands at home. Through text-critical methods, among them the observation that this paragraph breaks up the flow of Paul’s discussion on spiritual prophecy and that in some manuscripts it comes at the end of the chapter, most Paul scholars today think that this was an interpolation by a later scribe.

If Paul himself did not expect women to be silent when it came to church matters, the question is open: is “Junian” a male companion of Andronicus, or the latter’s wife and an apostle in her own right — who together carry on missionary work similar to that of Prisca and Aquila (Rom. 16:3-5)? This issue has been around for years, but Epp’s comprehensive research makes a powerful case for Junia’s feminine gender.

If you have studied another language, you know that, in highly inflected languages like Spanish, French, German, or Greek, words have different endings depending on how they are used in a sentence.  “Greet Andronicus and Junian” places both names in the accusative case (direct object in English), so that the nominative case could be either Junias or Junia. However, in all the existing literature from the Greco-Roman world of this time period, no males are named Junias, but there are 250 instances of the female Junia. Nor are there males called Junias as a shortened form of Junianus, as some have proposed.

I learned that years ago from David Scholer, but what I didn’t know is how important accents were to this text-critical question.  When using the female name “IOUNIAN” in Greek accusative, the acute accent ( ’ ) goes over the “I,” but a male name ending in “IAN” would have a circumflex (~) over the “A.”  That would make things easy — except accents were not used in Greek until the seventh century!

Well, then, which accent did copyists use from the seventh century on? Joseph Fitzmyer’s Romans commentary lists sixteen Greek and Latin commentaries of the first millennium who understood IOUNIAN in Romans 16:7 to be female (Epp, 32). The one exception, dug up by Wayne Grudem and John Piper, is the 5th century church leader Epiphanius — but to their credit, these relentless conservatives admit that Epiphanius also designated Prisca (Priscilla) as “Priscan,” a male! So scratch that exception.

The first credible reference to Junia as male comes from Aegidius of Rome (ca. 1243-1316) in the late Middle Ages, though without explanation. Two centuries later, in 1512, Jacques LeFevre also considered her a man, even though in the Latin translation available to him the name was clearly feminine (37). Ten years later Martin Luther’s influential German New Testament appeared. Following LeFevre, he designated Junia a male. In Luther’s Works, we find the following:  “Greet Andronicus, the manly one, and Junias, of the Junian family, who are men of note among the apostles” (38). Yet this sex-change operation occurred without a shred of evidence or even an attempt at persuasion. Junia became Junias simply because a woman could not possibly be an apostle!

Nevertheless, beginning with Erasmus in 1516, all Greek New Testament translations except one consider Junia female. This continues until 1927 when the thirteenth Nestle edition (the first had come out in 1898) inexplicably changed the accent from acute (feminine) to circumflex (masculine). (The two major Greek versions of the New Testament are the Nestle, which in 1956 became Nestle-Aland; and the standard text of the United Bible Society [UBS]). It is true, however, that the 14th through the 25th editions of the Nestle or Nestle-Aland editions included a footnote with the alternate feminine reading. The UBS, first published in 1966, omitted even the alternate reading until 1975. The 27th Nestle-Aland edition and the fourth UBS edition both came out in 1993, years after inclusive language had become a public issue, and inexplicably still retained the masculine Junias. Then, without explanation, in 1998 the fifth revised printing of the 27th Nestle-Aland edition, and the third printing of the fourth UBS edition both changed Junia’s sex back to female!

I know this sounds terribly confusing, and I would have given up on it if Eldon Epp had not laid this out plainly in two charts (62-63). I had not realized so many different editions, and different printings of editions, had been coming out, but it indicates that advances are continually being made in the interests of textual accuracy. These charts sent me scurrying off to my limited collection of Greek New Testaments.

Sure enough. My UBS4 (1998) edition had the appropriate feminine accent for Junia, but in the previous UBS4 (1993) edition and a UBS3 (1975) edition, she was still male.  Long before I knew Greek, I had bought a 1964 Interlinear Greek-English New Testament. The Greek text was Nestle-Aland, with the circumflex over a male Junias — but the English text was King James — which calls Junia a female!  Within this conflicted volume, our apostle had become a hermaphrodite!

If I was ignorant of the machinations of these Greek textual critics who produce one edition after another, how much less would a non-Greek reader know? So Epp provides a similar chart for the English Bible from Tyndale in 1525 to the New Living Translation of 1996. It’s a mixed bag, beginning exclusively with the female Junia, including the King James Version (KJV) of 1611 and its many revisions. But by 1837, Junia again mysteriously becomes Junias in most translations until the New American Bible (NAB) of 1970. Since then, every version on Epp’s list assumes a female Junia, with these five important exceptions:  Living Bible (1971), NIV (1973), New Jerusalem Bible (1985), The Message (1993), and Contemporary English Version (CEV, 1995).

What astounds Epp is that he can find no evidence for why Junia, who had been female for over a thousand years, suddenly changes gender. There is no new manuscript evidence, no explanation whatsoever — other than gender bias. IOUNIAN has to be male since women cannot be apostles. Equally surprising is the lack of explanation when editions revert back to Junia as female. Surely an apology for previous gender bias is in order!

Epp (helped by a 2005 article by Linda Belleville) also demolishes a more recent argument that, even though Junia was a woman, she and Andronicus were not prominent among apostles, but wereknown to the apostles.

There are many more twists and turns in Epp’s engaging and persuasive argument. For those not familiar with textual criticism, but who would like further evidence of prejudice against women’s leadership in the church, this slender volume is worth reading. It is similar to the constant muckraking and detective work good journalists of today must do to keep politicians honest. It reminds us to keep reading with, in Elisabeth Schussler Fiorenza’s words, a “hermeneutic of suspicion.”