Home Book Reviews I Love to Tell the Story: 100+ Stories of Justice, Wisdom, and...

I Love to Tell the Story: 100+ Stories of Justice, Wisdom, and Hope
The Reverend Dr. Nancy Wilson
Parker, CO: Books to Believe In, 2016
Paperback, 218 pages 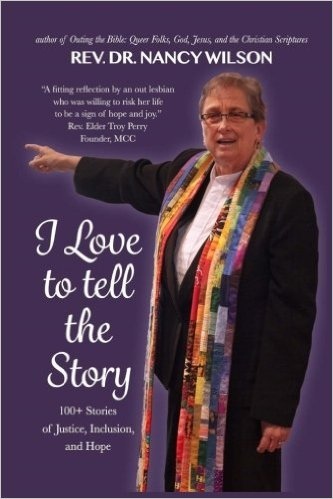 How would you like to own — or give to someone you love — a book that carries you along on its own joyful stream of stories? Yes? Then I have just the perfect book for you: the Reverend Dr. Nancy Wilson’s I Love To Tell the Story: 100+ Stories of Justice, Wisdom, and Hope.

I have known Nancy Wilson for many years, and I felt inspired even before I opened this new book when I saw the front cover photograph of her wearing her splendid rainbow stole.  (Ok, full disclosure, I have always felt affection for Nancy, and that affection did not diminish when she succeeded Troy Perry as the Moderator of the Metropolitan Community Churches around the world.)

Wilson’s stories are grouped by theme: fourteen about weddings, love, and marriage equality. Eleven about “pastoring the lost and found.”  Seven about funerals, death, and grieving (remember, Nancy was a California MCC Pastor when AIDS broke out and decimated congregations there). Eleven stories on hate, violence, and hate crimes (MCC congregations have endured vicious attacks, including murder, arson, and many bomb threats). Eleven stories about laughter. Eleven portraits of memorable moments. Nine stories about babies, kids, and angels. Twelve about the first decade of MCC’s existence, during which Nancy corrects the widespread assumption that she co-founded the denomination along with Troy Perry; but no, she joined MCC 4 years after its founding. Six stories about MCC buildings. Ten about sexuality, the Vatican, and other ecumenical adventures.  And finally, six stories about encounters in the White House, including a fine picture of Nancy with the Obamas and the Bidens.

My personal favorites are stories featuring wonderful people I met during my many years of interaction with MCC pastors and leaders, such as Rev. Elders Freda Smith, Jean White, and Don Eastman; Nancy’s spouse Paula Schoenwether; and the Revs. Pat Bumgardner and Troy Perry.  And I loved the story about people’s being healed after “falling asleep in the Spirit.”  I have seen people collapse dead-weight onto the floor during MCC prayer services, and I value Nancy’s testimony that the experience frees people from grief and betrayals and leaves them “renewed and refreshed” (pp 190-2).

I was also quite moved by Nancy’s remarks concerning signs of hope, including reassurance from loved ones who have died.  Nancy recalls telling Skip, whose partner Victor had died of AIDS, that he could certainly receive a sign that Victor was okay— but that when the sign came he must accept it without any second-guessing and without asking for further signs.  After church several weeks later, Skip told Nancy that he had gotten his sign (pp 64-65). I felt encouraged by Skip’s experience because I often ask widows and widowers about any messages from the other side, and have noticed that people who are open to such messages often get them, whereas people who scoff at the idea rarely do.  (But a few have reported being very surprised!)

I was glad that while endorsing same-sex marriage, Nancy was careful to note that marital equality is “not the only civil or human right that matters.” Worldwide, “safety from violence or harassment, the de-criminalization of homosexuality; and the de-pathologizing of transgender people, are desperate social and human rights needs” (p. 18).

Having done my bit to help MCC achieve more inclusive God-language as well as human language, I was interested to learn that as late as 1969, “the new MCC was not really sure about ordained women or ordaining them” (p. 129).  Fortunately, most congregants were open to more light from Scripture and responded positively to the female imagery for God in the Bible — imagery that honors females as well as males, lesbians as well as gay men, and everyone in between.

I loved learning that in 1970 Troy Perry had prayed in Washington D.C.’s National Cathedral that the homophobia of the Episcopal Church would be healed.  So when professor Lewis Crew secured the National Cathedral for MCC’s use on October 29, 2005, that became the time and place for Nancy Wilson’s installation as the second leader of MCC worldwide.  According to its own mission statement, for that one day America’s National Cathedral was a Metropolitan Community Church (p. 174)!

Of course I share Nancy Wilson’s amusement that for many right-wing Christians, the King James Version is the only truly inspired version — because its authorizer was a well-known homosexual.  (Seventeenth-century people frequently called Elizabeth the First a “king,” but James the First a “queen,” p. 183). And I share the irony of the fact that Pope Benedict called it “disgusting” and “offensive” to allow people to express their rage about persecutions that are “excused” by the Bible, but did not use such terms to describe pedophilic priests or those who protected them.  Nancy asks, “Where is the sense of proportion and justice?” (p. 183).  Indeed, where?

I hope I have stirred in you a desire to read these fascinating stories for yourself.  You will not be disappointed.