A review of Sex Differences in Christian Theology: Male, Female, and Intersex in the Image of God 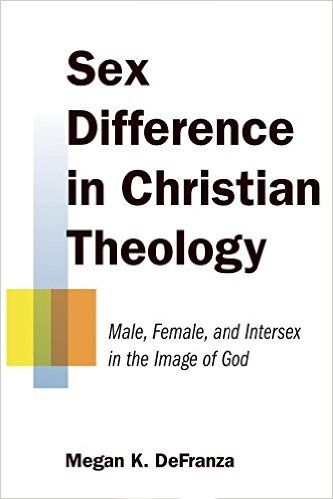 Megan DeFranza began her studies of sex and gender at an evangelical seminary and continued them at a Roman Catholic university.  From those years of study she brings a clear focus to this carefully nuanced first book.

DeFranza explains that she has struggled with whether or not to include transpeople, because like intersexuals, transgender people push beyond the binary category of male and female.  Asserting that “the main difference between intersex persons and transpersons as they are currently defined is the lack of identifiable physical phenomena undergirding transgender experience,” DeFranza decided to stick to bodily sex difference that would lay the groundwork “for conservative theologians to enter into transgender discussions with less trepidation” (pp. 286-287, footnote 140, emphasis mine).  In this decision DeFranza agrees with my statement in Omnigender (even though she labels it a mistake): “intersexual people are the best biological evidence we have [so far] that the binary gender construct is totally inadequate and is causing terrific injustice and unnecessary suffering” (p. 268, footnote 89, emphasis mine).

DeFranza’s thesis is that from the social standpoint, the image of God is strongly related to human embodiment: sex, gender, and sexuality.  The complexities of these topics add to the mystery with which Christian theologians must wrestle in this post-modern period.  DeFranza therefore calls readers to heed the voices of intersexual people who want inclusion in the human family, and in fact have for millennia been present in the historical records of Christianity.  Although there is no need to dismantle the categories of male and female, there is urgent need to open up an in-between space that includes intersex, with all of these three categories equally called to conform to the image of Jesus.  Here I fully agree with DeFranza, although I would include transgender and gay, lesbian, and bisexual people as occupying that in-between space.  For some reason, DeFranza claims that in Omnigender I urged the obliteration of all sex-gender categories, but my point was to enable people of all sex/gender/sexuality categories to define themselves and live honorably as the people God created them to be.

DeFranza establishes her evangelical/conservative status by insisting that conformity to Christ’s image requires sexual chastity: “monogamous chastity within marriage and celibate chastity outside of marriage” (pp. 282-3).  Throughout Sex Differences, DeFranza interacts with many scholars who have discussed intersexuals and tangential issues, mainly three scholarly articles by J. David Hester, five scholarly articles by Suzannah Cornwall, and my book Omnigender.  She acknowledges that Hester, Cornwall, and I all “herald the love of God” that requires “decentering and recentering of self; and loving (i.e., relating in mutual interiority to) others” (p. 282).  But then she parts company with us by her insistence on monogamy or celibacy.

I cannot speak for Hester or Cornwall, but in my own behalf I can say that I was taught as an LGBT advocate never to put down anybody’s attempt to relate, since whatever limited efforts someone might make toward relationship might be the very best their damaging experiences may permit.  And my negative judgments would only make matters worse.  I agree that in Christianity Jesus is “the true human”—uncategorizable as male, female, or intersex—into whose image all of us are ultimately to be transformed.  But how about some patience with wherever people may happen to be on that journey?

DeFranza builds her case for intersexual inclusion with a thorough description of various forms of intersexuality from a medical and sociological viewpoint.  She provides an extensive and very helpful discussion of eunuchs in the Bible, especially Jesus’ remarks in Matthew 19:12.  She also supplies an in-depth description of the way Catholic and Evangelical theologies have viewed the body, sex differences, and intersexuality through the ages, concluding with Jesus as the true image of humankind in this Christian era of “Already” and “Not Yet.”  She also provides an 18-page bibliography and helpful index.

I very much admire DeFranza’s meticulous blending of theology, social science, and medical information about intersexual conditions that are not easy to describe.  And I recommend this book as essential reading for anyone interested in extending justice and a Christian welcome to those who cannot comfortably fit into our society’s binary gender construct.