Home Book Reviews May Cause Love: An Unexpected Journey of Enlightenment after Abortion 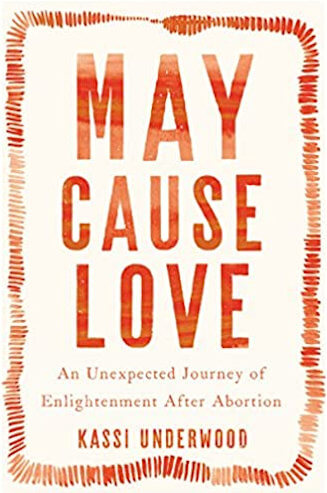 It was not supposed to be that big a deal. Kassi Underwood was not religious in 2004 when, at age 19, a college student in Kentucky, she found herself pregnant and decided to have an abortion.

Although she felt relieved, she also found herself feeling regretful. Was it really the right decision? She noticed a “cultural lunacy around abortion” (p. 4) that was depressing. Anti-abortionists said women like her were murderers and would go to Hell, but her community of friends could not comprehend her having depression after abortion. She felt caught between the two extremes.

“A feminist priest laughed through her nose when I admitted I needed to heal,” (p. 4) Kassi writes. Her family had a tenuous connection to an Episcopal church where they had “gone to get our holiday dose of God.” (p. 37)

“I didn’t want to feel obligated to regret my decision,” (p. 4) she reports, but she could not “pretend that my abortion was no more significant than the tonsillectomy I had had in high school.” (p. 4)

These nuances of morality and ethics are familiar to many members of Christian Feminism Today. We each locate ourselves somewhere on a grid that includes secular feminism, evangelical anti-feminism, biblical equality, and cultural experimentation.

Feminists wanted Kassi to say, “I made the best decision. No regrets. My body, my choice.” (p. 198) “But it was ridiculously problematic, that story,” she recalls. “What that story didn’t say was, the same conservative system that set up so many of us to get pregnant by accident, was the same creepy system that made bringing a child into the world seem like a brutal thing to do. The same system that taught abstinence-only sex education . . . told girls that our sexuality was dangerous and dirty and the sole source of our value, and gave boys and men no responsibility for their sexual behavior.” (p. 199)

In this book, a blend of memoir and journalism, Kassi recounts her six-year spiritual journey in search of healing. She goes to therapists, recovers from alcoholism, tries meditation, and tries prayer. She interviews researchers and does Internet searches for a ritual for healing after an abortion.

“Rock-Bottom Loser Entertaining Offers from Several Religions” is her title for the chapter in which she begins her quest. She writes with humor and pizazz, recounting the journey along which she earned an MFA in literary nonfiction from Columbia University.

“Why did destigmatizing abortion have to mean making it seem painless and simple?” (p. 198) she wonders. Her first step is a muzuko kuyo Buddhist ritual for healing from abortion, miscarriage, or stillbirth. Then she attends a Roman Catholic weekend retreat that turns out to be run by pro-lifers who picket abortion clinics. Kassi describes the ordeal well, including a ritual of naming the “baby” and giving it back to God. She gets angry at the judgment she encounters, and I became impatient with her for letting these zealots bully her. They even invite her to join them on the picket line. I could appreciate her post-abortion angst, but parts of her quest for healing seemed so futile.

Along the way, she learns to grieve and to voice her story. She meets several women who profoundly touch her life: Terra Wise, a “midwife for the soul”; Aspen Baker, leader of a pro-voice movement called Exhale; and Rabbi Rayzel Raphael, who with five “wild women” led a Jewish ritual for life transition after abortion. Kassi finds love for her 19-year-old self, for the “baby” that wasn’t, and for the future.

Kassi embarked on a speaking tour, sponsored by Exhale, with four other women, speaking about their abortions and encouraging their audiences to tell their own stories. Her research and journey of healing led to this book.

Inspired by the women mentors she encountered, Kassi went on to earn an M. Div. from Harvard Divinity School and to found Revolution After Abortion, a program for people who have experienced abortion. Now about 36 years old, she teaches meditation and works with clients around the globe.

May Cause Love is a romance story as well as a story of healing. We follow Kassi from her high school sweetheart to the drug-using guy with whom she conceives and through a couple more relationships. It’s a fun and interesting book for anyone who cares about legal access to abortion or who has ever thought, “There but for the grace of God go I.”

Editor’s note:  For more CFT articles on abortion, click here for the archive.

© 2020 by Christian Feminism Today.
Please request written permission before reprinting any part of this review.

Reframing the Coronavirus Outbreak: The Spiritual Practice of Social Distancing and...