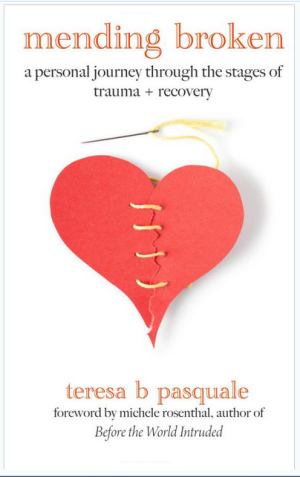 The foreword to Mending Broken by Teresa B. Pasquale contains the following words, written by author and post-trauma coach Michele Rosenthal: “The most difficult aspect of dealing with trauma, addiction, mental illness and emotional pain is the way it sets you apart…because you feel separate and apart…you recede from the world seeking relief in the comfort of isolation.”

That sense of feeling separate, that place of isolation, is what draws me to books like Mending Broken in the first place.  It is also the reason why I struggle to finish them and often walk away without any sense of healing.  My pain is mine.  How can anyone else possibly comprehend what I’ve been through in my life?  How can anyone else’s story possibly breach the walls I have built carefully around myself so I will not feel pain like that again?

My protective walls were firmly in place when I started reading Mending Broken, but it took only a few pages before I started thinking, “How does she know?”

I first read about Pasquale when she was interviewed for the EEWC-CFT blog Where She Is prior to the 2013 Wild Goose Festival. That interview was the reason I decided to attend the festival.  Pasquale was open about not having all the answers. I especially loved her response about personal responsibility in healing ourselves:

“Responsibility is a tough word. We have the capacity. We have a divine calling towards it. But our choice is our choice and I have learned, and still learn all the time, to respect that choice. I have met many people who are blocked from healing—they stand in their own way—sometimes because it feels safe, actually often because it feels safe to be stuck. And I want to honor their safety and their choice to stay safe because, especially if you have not been safe for much of your life, you have the right to feel safe even if that means not healing.”

For a trained therapist to say that it’s okay to be where you are in your personal journey was hugely significant to me.  So often I feel the “should” syndrome overwhelming me: I should be well.  I should get over it.  I should be fit and strong and healed.  And when I don’t feel that way, I feel as if I’ve let myself down.  To read that it’s okay to be where I am at any given moment was comforting.

As I chronicled in one of my guest posts on Where She Is, I was tremendously moved by Pasquale’s first session at Wild Goose.  I was inspired to order Mending Broken immediately upon returning home from the festival, and when it arrived I read it voraciously, finishing it in a matter of hours.

Pasquale’s story begins in a similar vein to my own: we are both from the East Coast, and we both suffered trauma in our formative years.  Our stories diverge in terms of the trauma suffered: Pasquale was raped twice, both times by men she knew, and neither incident was reported to the police.  She told several friends, who commiserated with her but basically told her to “get over it.”  Pasquale moved to Colorado in an attempt to start over, but found herself in a dysfunctional relationship while suffering from PTSD.  These events comprise Stage One, titled “Scotch Tape and Band-Aids,” the first of four stages that Pasquale describes as her “compartmentalization of the four emotional places on the roadmap from traumatic experience into a birth of a new self: mind, body, and spirit.”

There is a reason why the second of Pasquale’s four stages is subtitled “Ripped At the Seams.”  Her healing process began painfully, with the end of her relationship and a challenging first visit to a therapist who used techniques that actually triggered more suffering.  Those experiences could have halted the process right there, which happens to many people suffering from trauma.  As I read, I was reminded of one of Pasquale’s responses in the Where She Is interview, where she said,  “…especially if you have not been safe for much of your life, you have the right to feel safe even if that means not healing.”

Pasquale was able to progress to the third stage, which she subtitles “Sewn Together.”  This stage is the most compelling to me because it acknowledges the slow, sometimes misguided process of personal healing.  I’ve always viewed the process as having an end point, a healing “goal” that can be achieved, after which the trauma is then put to rest.  Having never met that goal, my healing seemed to be stuck, like a CD on repeat, the same song playing over and over without end.  I strongly identified with Pasquale’s experience of visiting multiple therapists over a couple of years, sharing her trauma each time, and never returning for further treatment.

Pasquale acknowledges a similar issue in her healing process by writing about her discovery of feminism when she attended college and minored in Women’s Studies.  The study of powerful women appealed to Pasquale’s need to banish her weak self, a victim of trauma, and replace her with a self who could never be hurt.  Pasquale’s writing about feminism is one of the most brutally honest and beautifully reflective moments in her story.  After using feminist principles to create a rickety soapbox to stand on, Pasquale realizes that denying any aspect of her feminine self means that she will not be whole or healed.  She writes, “I became some facsimile of feminism that wasn’t really feminism at all…I was as rabidly dogmatic as I was ravenous for information to feed my dogmas.”  Pasquale’s ability to see that feminism was part of her journey, but not the end of it, acknowledges the true complexities of the healing process.

Those complexities led to Pasquale’s embracing not only feminism and therapeutic techniques, but also yoga and 12 Step program principles.  “In yoga,” Pasquale writes, “I learned a way to manage fear without control.”  She writes delicious paragraphs about how yoga changed her relationship with her own body—paragraphs that would make even the most cynical reader want to sign up for a class.  Pasquale also derives healing from her work as a trauma therapist.  She writes that she is a “wounded healer,” and in one of the book’s most touching moments, writes, “It seemed absurd to have learned so much about the nature of healing in my own recovery and not take that and give it away.”

Having had the opportunity to meet Teresa at Wild Goose, I am not surprised that she shares with others what she has learned about recovery.  My impression of her is that she is whole, healed, and a truly gentle soul, which is all the more miraculous given her traumatic experiences and personal challenges.  So often, we as human beings reward those who have steeled themselves against pain and suffering, calling them “strong,” “powerful,” “tough.”  Mending Broken is Pasquale’s invitation to consider a different way—a way through suffering, with the reward of grace.