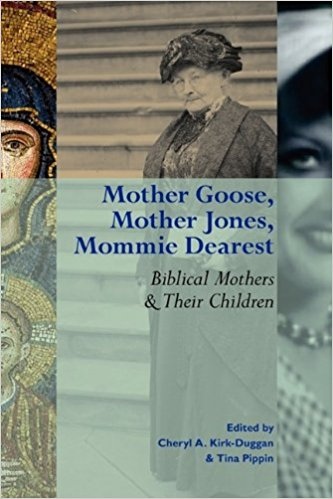 The articles included in Mother Goose, Mother Jones, Mommie Dearest: Biblical Mothers and Their Children showcase a wide variety of voices as well as varied methodological approaches to the biblical text. Some of the included chapters are exegetical, focusing on specific Hebrew words and the way these words influence our reading of the text. Other chapters are more focused on cultural criticism, both of biblical culture and our own present-day culture. Still other chapters are extremely pastoral in tone and offer words of hope that are easily understood by the average lay member interested in these questions and conversations.

Editors Cheryl A. Kirk-Duggan and Tina Pippin focus this book around the assumption that many children “have strong images or experiences of mother, whether she is alive or dead.” From this jumping off point the contributors of this volume delve into topics such as the problematic aspects of the relationship between Jesus and his mother, the Bible being read as a Mother Goose tale, whether working mothers are “wrecking” their children, and the response of people of faith to the reality of incest and the sexual abuse of children within their congregations.

Though all the articles are thought provoking in their own way, two in particular stood out for me. In chapter 4, “Of Virtue and of Eating Shorts: Breaking Down the Configuration of Faithful Mother and Wayward Son in Judges and The Simpsons,” Frank M. Yamada (as the title suggests) uses examples from The Simpsons (an animated parody of the traditional sitcom) to connect to the biblical motif of the wayward son found in Judges 13. While The Simpsons was originally intended to make fun of traditional family sitcoms, Yamada argues that, in fact, it backs up many of the traditional gendered roles those sitcoms originally enforced. One example Yamada uses focuses on the episode “$pringfield: Or How I Learned to Stop Worrying and Love Legalized Gambling,” in which Marge becomes addicted to slot machines; as a result she neglects her family and craziness ensues. Any time Marge steps out of her traditional/expected role within the household the rest of the characters suddenly run amok: Bart running a casino out of his tree house, Lisa having bad dreams, and Homer barricading the three of them in the house for protection.

Yamada connects this chaos with Judges 13 (the beginning of the Samson cycle) where the reader is set up with the traditional annunciation story that signals the expectation of a hero, which in this case will not come to be, as one continues through the Samson story. Both stories use gendered understandings that rely on the traditional expectations of the gendered roles between mothers and sons, but both also use chaos to disrupt those expected roles.

Another fascinating article, “Parturition (Childbirth), Pain, and Piety: Physicians and Genesis 3:16A” by Linda S. Schearing focuses on the question of whether women should be allowed drugs while giving birth or if the associated pain is part of the “curse of Eve” in Genesis. Schearing presents multiple historical arguments on both sides of the question. Interesting, she finds that the theological community, overwhelmingly, had no objections to the use of drugs to help with pain while giving birth but that doctors often found this to be religiously problematic.

One drawback to this collection that I noted was a failure to fully unpack or explain who Mother Goose, Mother Jones, or Mommie Dearest were/are/symbolize. Many of the authors alluded to these archetypes of women, but it was not until page 180 that Mother Mary Harris Jones, as a historical person, was directly addressed or explained, which I found disappointing. While many people reading this book would likely have at least a basic knowledge of these three women, it would have been helpful to highlight them early in the text, perhaps as part of the introduction. All in all this was a wonderfully interesting book and would be an enjoyable read for anyone interested in biblical or theological topics. It would also provide plenty of room for conversation within a book group or classroom setting.