Home Where She Is Blog My Name 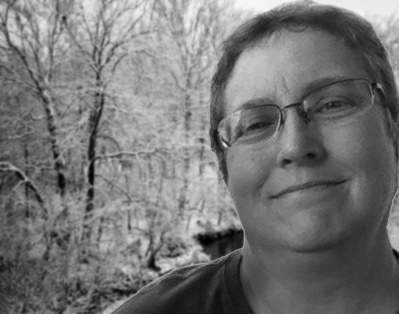 At first I was sure I was a boy. But there were people all around who convinced me it was shameful for a person with two X chromosomes and no penis to want to act and play and dress like a boy.

After a while, I believed them.

Since I couldn’t be who I thought I was, I decided that the only way to be here was to try to be more like what everyone wanted me to be. So I watched, carefully, and figured out how to be accepted, how to get people to like me.

I was standing in a small computer store one day, waiting in line. A man came in with his son, who looked to be about four years old. As the dad looked at the things on the shelves, I noticed the little boy was scrutinizing me.

“Hi,” he said. Not a shy one, this kid. His dad turned around, and after judging me to be harmless, he went back to looking at the shelves. The little kid moved closer to me, looking me up and down. I thought I knew what was coming.

“Are you a boy or a girl?” he asked after a few seconds. His dad turned around with a horrified look on his face, but relaxed when I laughed.

“I don’t know,” he said in that great, exasperated way kids have of dismissing a silly question. His dad looked apologetic.

“Well, I’m a girl. Not all girls look like you expect, and not all boys do, either.”

“Okay,” he said kinda slowly, as if he wasn’t quite sure I was telling the truth. He moved closer to me, then he reached up and lightly poked at the side of my breast. His dad looked horrified again, and called his son’s name, sharply. But I laughed and said not to worry. His dad apologized about ten times and explained to his son that you don’t go around touching people you don’t know.

I didn’t say anything after that, but I understood the kid was just trying to make sure I wasn’t lying. Breasts equal girl.

I was twelve or thirteen, and fairly new to the neighborhood. I was thrilled when Michelle down the street invited me to a slumber party at her house.

There may have been seven or eight girls attending. Michelle’s parents had gone to bed and we were hanging out in the basement.

I remember talking to Michelle and one other girl by the stairs. The rest of the girls were in the main room next to us. I remember the conversation turned to periods. I remember being embarrassed talking about this but admitted mine hadn’t started yet.

I lose the thread of the memory after that, but it picks up in the main room. I have been backed into the corner by the other girls. They are advancing on me in a semi-circle. It feels like a bad situation, and I am trying to figure out what to do.

“I don’t either,” agrees another.

“Let’s take her clothes off and find out,” Michelle says. There is laughter.

I remember quite clearly the next moment, as I thought about reacting violently, fighting my way out of the circle, or considered if the best response was to employ some kind of confident, joking banter.

I decided. My body flushed with adrenalin and tears filled my eyes. “You better not touch me or I’ll kick your ass,” I warned through gritted teeth. It sounded like I meant it.

Silence fell over the taunting girls. Then Michelle said, “Jeeze, we were just kidding around with you. Lighten up.”

And with that, the girls all laughed, and the semicircle opened in the middle, letting me out.

The only other thing I remember about the rest of the slumber party is that I didn’t leave—I stayed and played along with everyone else in pretending it hadn’t happened.

I remember an afternoon, maybe 20 years ago, when I shared what I then believed to be the true story of me with a bodyworker named Vickie. I told her about being the third Margaret, and carefully explained how the other two Margarets had taught me to serve and do music and to surrender myself to continue their work of making the world better. I was proud of this story with its overtones of altruism and not a little self-sacrifice. That story allowed me to create meaning out of a life in which I had replaced my own desires with what other people needed from me.

I remember Vickie looked at me quizzically for a moment before simply saying, “Doesn’t sound like there’s a lot of room for you in there.”

That didn’t make sense to me at the time, and I thought she just didn’t get how cool it was to have a story like that, a purpose like that.

I was walking along the sidewalk in my neighborhood one night a couple years ago. I like it when everyone else is asleep.

As I walked, I was thinking into the parts of my experience that I’d walled off years ago. Questions came to me like they were spoken out loud, but these were questions I could hardly wrap words around. The questions were about the future of this one life.

I felt years of inhales and exhales stretching out in front of me. My attention fell to my breasts, and I felt the stabbing disappointment that overwhelms me when I think about my body or look at more than just my head in the mirror.

Then the astonishing impossible spoke into my mind — I realized I had the ability to change. And that realization was quickly trampled by a thundering onslaught of fear.

We are taught from a young age to see life in terms of binaries. There is up and down, love and hate, good and evil, and, of course, male and female.

It is nearly impossible to overcome this way of interpreting experience, but away from this planet’s surface, up and down becomes fairly meaningless. Love and hate are both different aspects of human attachment. An event that seems rooted in evil can be the necessary pivot point around which human history bends toward something more compassionate.

And while there is a cultural definition of male and female that demands a binary, we should all know by now that the gender expression (and biological sex) of human beings falls along a continuum, not just in two distinct baskets.

Moving away from binary thinking is a big shift that is antithetical to almost all of our cultural norms. Advocating ways of thinking that suggest that an accepted binary is not absolute can upset people.

For over 50 years I’ve been afraid to upset people, and that meant sacrificing my needs until I lost awareness of having any. Feelings had to be stuffed, and that involved finding ways to keep myself numb. There’s been a serious cost. I have not been kind, forgiving, or compassionate toward myself. At times, the only thing that kept me on the planet was knowing that killing myself would hurt the people I love. I’ve used drugs and alcohol and food and work and razor blades to keep my place in some binary I don’t even believe in. Just so I won’t upset people. Just so they won’t have an opportunity to tell me, again, how shameful I really am.

And that’s what I want to tell you. My name is Lē (pronounced “Lee”), and I won’t be living on the female side of a gender binary any more.

I need you to know that, and if you can support me I will be so very grateful.

I can no longer deny myself the opportunity to become the person I knew I was created to be. I can’t live the rest of my life being enslaved to the shame I learned to feel about my real self. I don’t know how it will all end up. But right now, I do know this one thing.

I know some people will be happy to call me Lē, but some people will find it difficult to stop calling me Marg. And I’m sure I will refer to myself in different ways in different situations. I don’t currently see this as a problem. But if you start to think of me as Lē, and refer to me that way, it will make my heart happy. (And it’s okay to leave the line off the e when it’s not possible to find it.)

Because it’s what we do these days, I’ll talk about pronouns. I will not insist on any in particular, but zie, hir (pronounced like “here”), and hirs (pronounced “here’s”) would be my preference, but they, them, and theirs will be fine, too. I will be grateful every time you try to refer to me with gender-neutral pronouns.

I know you might be curious about whether I’m going to be changing my body in any way. Early in February 2018, I had top surgery, but at this time I do not plan to start taking male hormones. I’m going to see if a more neutral physical presentation suits me.

An Interview with Susan Cottrell