Home Book Reviews A New Gospel for Women: Katharine Bushnell and the Challenge of Christian... 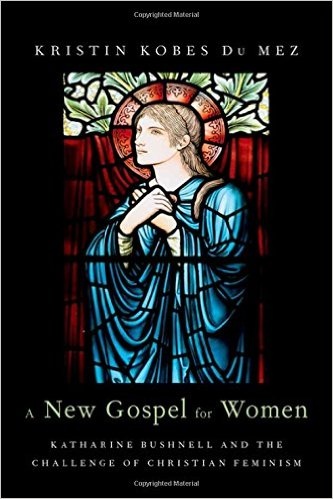 “If God is male, then the male is God,” wrote Mary Daly in her hallmark text of feminist theology, Beyond God the Father (Beacon, 1973).  Later in her career, Daly concluded that nothing of Christianity could be salvaged because the patriarchy that reigned within it could not be separated from it.  However, in this thoroughly masterful work of feminist theology, Dr. Kristin Kobes Du Mez documents the struggle that Katharine Bushnell undertook because she believed differently. Bushnell’s life and works reveal her belief that it was possible and, more important, necessary to remove patriarchy from the ethos of Christianity to uncover a true faith.

Bushnell (1855–1946) was a stalwart advocate of women, a missionary, a doctor, a researcher, a writer, and a theologian, and an engaging speaker and an unrelenting advocate against human trafficking around the world. Du Mez skillfully reveals the influences of time and place that molded Bushnell into the socio-religious force she became. From her Methodist holiness roots to the Victorian ideals of female domesticity that shaped Bushnell’s upbringing, she was, in some ways, a product of her time; and in other ways, she was an advocate of rebellion against the readily accepted ideals of her time. She rebelled particularly against all ideals and socio-religious structures that dismissed women as the inferior sex.

Bushnell was a fierce biblical scholar and used traditional methods of exegesis as well as a commanding knowledge of biblical Hebrew and Greek to reinterpret biblical texts that had traditionally been used to oppress women. In the preface of this book, Du Mez paraphrases Bushnell’s interpretation of the story of Adam and Eve in which she writes as a concluding thought, “For man’s disobedience and rebellion, God exiled him from the garden. But Eve, too, chose to turn away from her God and follow Adam out of Eden. And so Eve became the first woman of many to turn from her Creator to her husband, and to forsake her heavenly calling for the sinful submission to man.” The staggering and uncommon ingenuity of Bushnell’s exegesis and her thorough reasoning behind it as presented in this book is brilliant.

During her missionary work in China, colonial India, and East Asia, Bushnell began to question the morality of Western Christianity more deeply. It was in treaty ports with overwhelmingly Western presence that Bushnell noted and meticulously researched the most heinous and cruel practices of the sex trafficking of women. When she found that it was seemingly upstanding Christian men who organized and instigated the abuse and trafficking of women, she began to blame Christianity. She connected the patriarchy of Western Christianity with these appalling cruelties toward women, both at home and in the Western presence abroad. And the question became, “Is it possible for patriarchy to be stripped from Christianity?” Bushnell thought it was possible, and her life’s work began to focus on attempting to make this possibility a reality.

There is a chapter in the book titled “Liberal Conservatives,” which I believe encapsulates Bushnell’s work aptly in the intuitive cultural vocabulary of the last century.  Bushnell used the most traditional tools of biblical interpretation and had an incredibly high view of Scripture and the inerrancy of Scripture, while simultaneously, her interpretations of Scripture were radical and progressive in nature. These seem like incongruities, but are not for her. She vehemently disagreed with many younger twenty-first-century feminists on issues of birth control and temperance, while also maintaining that birth control would be just another way for the patriarchy of the state to control women’s bodies. She was often liberal in ideal and conservative in method, and this contradiction is masterfully explored by Du Mez.

And after reading this incredible work of feminist theology on an amazing Christian feminist, Katharine Bushnell, I must admit I am still left questioning who was closer to the truth; Daly or Bushnell.