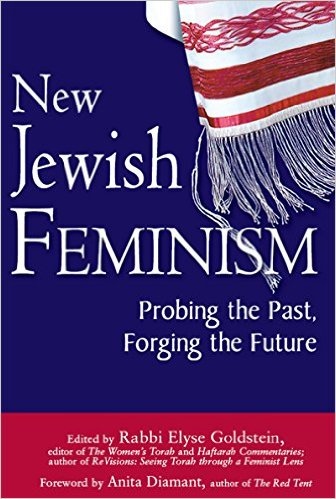 This splendid anthology documents the progress made in Jewish feminist endeavors and charts several courses for future consideration.

Following Anita Diamant’s “Foreword” and an introduction by Elyse Goldstein, the thirty-seven chapters are organized into seven sections.

Women and Theology
Judith Plaskow, whose 1990 Standing Again at Sinai remains a classic in Jewish feminist theology, opens Part I, “Women and Theology,” with “Calling all Theologians.” Plaskow remarks that the blossoming of Jewish feminist theology has yet to occur (then again, twenty-first century Jewish theology in general substantially remains still in the bud phase). By extending the term “theological” to encompass the “meta-questions” (p. 8) arising from praxis, gender models, the locus of authority, and the relation of Jewish feminist endeavors to the project of Tikkun Olam (“repairing the world”), she firmly yokes the theological endeavor to community life. Donna Berman’s “Major Trends in Jewish Feminist Theology” expands upon Plaskow’s theology as well as the writings of Rachel Alder and Rebecca Alpert.

In “To Her We Shall Return,” Jill Hammer appeals to goddess references in the Bible and the Ancient Near Eastern archaeological record, the tradition of the Shekinah, “spiritual experiences” (p. 24) reported by Jewish women, the import of panentheism and transmonotheism, and descriptions of the divine feminine which resist stereotyping gender roles to locate Goddess traditions within Jewish theological thought and practice. The article would be stronger were its data correct (“William” Dever, not “Daniel”) and its suggestions supported (e.g., that the sprinkling of blood in the Holy of Holies, “can be read as…the Goddess cleansing her womb” [p. 30]). Karyn D. Kedar’s “Metaphors of God” recovers biblical images of the divine “Birthing Mother,” El Shaddai as “God of Nourishment” (p. 37), the Tetragrammaton (the four Hebrew letters that represent the ineffable name of G-d) as feminine “Being-ness” (p. 39), and the value of the mixed metaphor, such as the addresses to G-d, “Father of Compassion” (the Hebrew for “compassion” also means “womb”).

In “Creation Theology: Theology for the Rest of Us,” Ellen Bernstein uses categories including goodness, beauty, fruitfulness and sustainability, interdependence, language, boundaries, wholeness, and service to reflect on the nature of creation. Her claim that her approach responds to the challenge of “fundamentalist Christians” (p. 53) who have co-opted Creation language ignores the ecofeminist work of Christian theologians such as Sallie McFague.

Women, Ritual, and Torah
In Part II, “Women, Ritual, and Torah,” the emphasis shifts from belief to practice. Danya Ruttenberg’s “Hermeneutics of Curiosity” (yet another addition to the list of hermeneutical models) offers familiar condemnations of the Talmud’s less progressive elements and their attendant practices; her call that rituals be transformed by new explanations shows both what has been accomplished in Jewish settings and what more needs to be done. Lori Hope Lefkovitz and Rona Shapiro address “The Politics and Aesthetics of Jewish Women’s Spirituality” through references to Rosh Chodesh (New Moon) groups, the sacrality of the body, and the development of new rituals. Elyse Goldstein’s “The Pink Tallit” (Prayer-shawl) queries whether women’s rituals are “imitative” or “inventive”; Geela Rayzel Raphael explores Jewish women’s claiming ritual power “From Ancient Times to Modern Meanings”; she and others in this collection have apt comments on how the traditional valuation of tzniut(“modest behavior”) impacts women’s social, personal, and spiritual lives. Several commentators also speak to new rituals, especially in relation to healing (e.g., from miscarriage; cancer treatment; sexual attack). Wendy Zierler comments on “Torah Study for Women” and Tirzah Firestone explores “Transforming Our Stories through Midrash.”

Women and the Synogogue
Part III, “Women and the Synagogue” launches into several pointed observations about the challenges facing female clergy and congregants. Jacqueline Koch Ellenson’s “From the Personal to the Communal” details “How Women Have Changed the Rabbinate”; Barbara Ostfeld complements this essay with her “The Ascent of the Woman Cantor”  – a major innovation in parts of Jewish life, given a Talmudic view that a woman’s voice is a temptation (B. Berachot 24a). Sara Hurwitz, a madricha ruchanit (“religious mentor”) states in her “Orthodox Women in Rabbinic Roles” that women can fulfill the roles of teachers, legal experts, and leaders; they are only barred from leading services and acting as witnesses for marriages, divorces, and conversions.  Ann Lapidus Lerner responds in “Pacing Change: The Impact of Feminism on Conservative Synagogues” by noting potential problems within the broader community when women rabbis take these exceptional roles. Irit Printz’s excellent “Women in the Conservative Synagogue” reflects that in applying to rabbinical school, she had not given “a second thought to my gender or the issues I might face because of it” (p. 188): a testimony to the success of Jewish feminism and an attestation from a “post-denominational, post-feminist, post-isms of any kind” generation (p. 192).  Sue Levi Elwell’s “Feminism and the Transformation of the Synagogue” looks not simply at personnel, but also at architecture and programming; Joseph B. Meszler’s “Where are the Jewish Men?” demonstrates that women’s increasing roles in some congregations have led to “The Absence of Men from Liberal Synagogue Life.”

Women in Israel
“Women in Israel,” Part IV, opens with Naamah Kelman’s “A Thirty-Year Perspective on Women and Israeli Feminism,” which delineates the “vast gulf between Israeli Jews and North American Jews” (p. 198). Challenges to feminism in Israel include the authority of the Orthodox over such personal matters as marriage and divorce. Dalia Marx speaks to “Gender in Israeli Liberal Liturgy,” wherein “Hebrew speakers constantly have to choose between the comfort of the well-known text and their ideological, theological, and aesthetic approach” (p. 208). Einat Ramon details the successes of and challenges facing “Masorti (Conservative Israeli) Women”; Margalit Shilo surveys “The First Decade of the Orthodox Women’s Revolution in Israel” by using as her test case Kolech, the “Religious Women’s Forum.”

Women and the Denominations
“Women and the Denominations,” Part VI, offers Idana Goldberg’s “Orthodoxy and Feminism”; Rachel Sabath Beit-Halachmi’s ‘Changing Status of Women in Liberal Judaism”; Gail Labovitz’s “Feminism and Jewish Law in Conservative Judaism”; and Barbara Penzner’s “Women and the Reconstructionist Movement.”  Haviva Ner-David, in “Feminism and Halakhah: The Jew Who (Still) Isn’t There,” defines herself as a “post-denominational rabbi” (p. 313) who no longer believes “in the importance of working ‘within the system’” (p. 322).

Leadership and Social Justice
In Part VII, “Leadership and Social Justice,” Shifra Bronznick’s  “Jewish Women’s Leadership for the Twenty-first Century,”  offers a call to action. Jill Jacobs’s “Bread, Roses, and Chutzpah: Jewish Women in American Social Movements” gracefully moves from Rose Schneiderman, an early twentieth century labor organizer, to the Freedom Rider Betty Alschuler to Betty Friedan to her own story, in asking “what is Jewish and Feminist about Jewish Women’s Activism?”  (p. 366). Lynn Gottlieb advocates for “Women’s Right to a World Free of Violence” – including within one’s own religious community; Valerie Joseph and Alana Sukin comment upon Jewish spiritual care providers and healing rituals from antiquity to the present in “Servants before the King: Raising Up the Healer to Leadership.” Finally, Rosie Rosenzweig’s “Post-Triumphalism and the New Haskalah” [Enlightenment] puts Jewish and secular feminisms in dialogue and, in a call missing through most of the volume, advocates a “sisterhood in all things spiritual” (p. 402) which looks beyond Judaism’s repository to other spiritual resources. The volume concludes with a helpful glossary and brief bibliography.

A number of familiar themes resound: strongly self-critical commentaries; recovering stories from the past and spinning new ones; the importance of knowing the tradition in order better to reclaim or redefine it; the problematics of determining what practices and beliefs are “authentically Jewish”; a robust attitude that can celebrate gains while recognizing there is much left to do.

Throughout as well are well-argued claims, creative suggestions, and thoughtful reflections. Missing or underrepresented are contributors representing secular Jewish perspectives, historians, activists for peace in the Middle East, and feminists engaged in interfaith conversations; a second volume would be welcome.

We can all learn from each other’s missteps, successes, and strategic plans. That this journal has invited a review of New Jewish Feminism is a solid step in the right direction; readers of Christian Feminism Today would, in turn, learn much from these reflections by their Jewish colleagues.