Home Book Reviews A New Religious America: How a “Christian Country” Has Become the World’s... 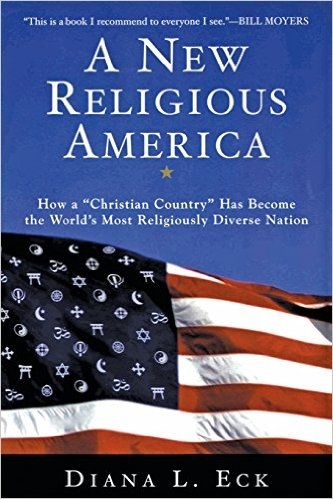 I had begun reading Diana Eck’s beautifully written book of celebration and challenge shortly before the eleventh of September. But after witnessing previously unthinkable acts, seeing the CNN report on the slavery to which the Taliban has subjected the women of Afghanistan, and hearing Osama Bin Laden spewing hatred in the name of Allah, I turned immediately to Eck’s 71-page chapter on Islam.

I already knew from the introduction that there are about 6 million American Muslims–more Muslims than Episcopalians or Presbyterians and approximately the same number as our Jewish population. I have for years been good friends with an Islamic feminist scholar, Dr. Riffat Hassan, who argues that the Qur’an has been misinterpreted by male supremacists just as the Bible has. I have had some excellent Muslim students, and one of my favorite poets is Rumi, a gay mystical poet of 13th century Islam, currently the best-selling poet in America. Nevertheless, I was shaken by Bin Laden’s rhetoric of Jihad, wondering whether we might have welcomed to our shores a Trojan horse of truly epic proportions.

What I found in A New Religious America brought matters into a clearer focus. One of the most frequently quoted Qur’anic passages is this: “Do you not know, O people, that I have made you into tribes and nations that you may know each other” (emphasis mine). And therein lies the challenge of this moment. As for Islam and violence, Eck quotes Jamal Badawi’s insistence at Boston University in 1994: “Jihad cannot be equated with senseless terrorism. . . . I would challenge anyone to find an instance of the term holy war in the Qur’an. Jihad means exertion, effort, excellence. The Qur’an is described as the tool of jihad, ‘Make jihad with the Qur’an,’ but not with the sword.”

In Islam, which means “peace through submission to and commitment to God,” armed jihad is permissible only under two conditions: for self-defense and for fighting against oppression. And of course, there’s the rub. Bin Laden has claimed that the acts of September 11 were simply the counter-violence of the oppressed–and I for one cannot deny that American foreign and corporate policies have led to horrific suffering among people in the Middle East. Could it be that the terrorism of September 11 seems bizarrely disproportionate because it was sudden, whereas these other sufferings have been drawn out over many years? And also because we have not experienced those other sufferings “up close and personal,” the way we have experienced our own?

No matter how we answer those questions, however, it is extremely disconcerting to be told that there are thousands of young Muslims as eager to die in jihad as most Americans are eager to live. Eck is helpful here: she explains that “militant extremist Muslims are to Islam what the radical Christian identity movements, the Christian militias, and the Aryan Nation are to Christianity: one end of a wide spectrum, one thread in a complex pattern of faith and culture.” And the challenge she insists upon is that we must awaken to the religious diversity in America, and get to know one another in both our differences and our common humanity.

That is exactly what Eck herself has done. Since 1991, Diana Eck, a United Methodist, has sent out more than 80 of her Harvard University students to do religious fieldwork all over the country as part of her Pluralism Project. And she herself has listened to, studied, and worshipped, mourned, and celebrated with representative congregations among the 4 million Buddhist, over a million Hindus, 6 million Muslims, 25 million Hispanic Christians, and others who came here in droves as a result of the 1965 Immigration and Naturalization Act. She describes her experiences with charming enthusiasm and convincing detail.

For the past 30 years, Eck explains, a million immigrants have been arriving in the United States each year, bringing with them faith traditions ranging from Jain, Sikh, and Zoroastrian to African and Afro-Caribbean. Because Americans have never before experienced so much diversity, we must now answer the question, “Who do we mean when we say ‘we’ “–a challenge to both our citizenship and our faith.

During my career at William Paterson University, I noticed that many professors of multiculturalism made the error of acting as if religion had no central relevance to the cultures they discussed. But thanks to this book and the Pluralism Project, for which Eck received the National Humanities Medal from President Clinton, that approach will never again be intellectually respectable.

A New Religious America should also cure its readers of any tendency toward unthinking adulation of our history. Eck describes the crushing of Native American spiritual traditions; the Chinese Exclusion Act of 1882; the 1923 denaturalization of Bhagat Singh Thind and 69 other Indians (mostly Sikhs) who had obtained citizenship; American refusal in 1939 to accept 900 Jews who had fled Nazi Germany on the steamship St. Louis, sending all 900 back to Germany and certain death; the 1942 internment of 110,000 Japanese Americans (mostly Buddhist) for the duration of the war; and other horrors.

Eck’s intention is not to defame America, but to build bridges between religious traditions within our borders. She does so by educating us about our diverse and sometimes painful backgrounds and by telling delightful stories about how various communities have recently overcome discrimination and achieved solidarity with the strangers in their midst.

I was disappointed that Eck barely mentions gender and transgender attitudes within the religions she discusses. That’s especially unfortunate in her chapters on Hinduism and Buddhism, where it would be important to know whether Americanized versions have retained the tolerance of gender-blending common in their traditions, or whether they have accepted the more rigidly binary attitudes of the West, including compulsory heterosexuality. Although the book is dedicated “heart and soul” to Dorothy Austin, whom Eck identifies as her life-partner of 25 years, elsewhere she neglects the gay, lesbian, bisexual, and transgender issues that have been so hotly debated in American religion during the years of her focus.

Despite these significant omissions, however, A New Religious America is a warm and informative guided tour of recent immigrant groups and their religions, offered by a woman of vibrant faith. Although she is an outstanding scholar, her style never even approaches aridity because of her intense personal involvement and the inspirational insights that emerge as she describes the basic tenets of religions new to most Americans. Simply stated, this is a great book.