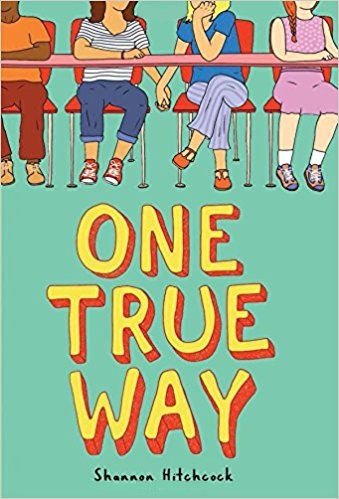 I devour books like food. Reading kept me alive as much as actual food did during my childhood, when I searched for reflections of myself in the pages of my favorite titles. I longed to understand myself and the world around me. I sometimes wonder: If I had known as a young woman that I was lesbian, would I have ever come across an age-appropriate book that accurately reflected my feelings and experiences?

Even the most voracious young reader in the 1980s would have been hard pressed to find a book like One True Way on the shelf. A middle grade book (for a core audience of 8- to 12-year-olds) about a lesbian relationship? The cover even shows two girls holding hands under their school desks!

One True Way is set in North Carolina in the 1970s. Allie is the new kid in seventh grade, having moved from New Jersey after the death of her brother Eric and her parents’ separation. On her first day of school, Allie meets Sam (short for Samantha) and the two become friends. Sam is athletic and popular but not a great student, while Allie wants to be a reporter and joins the school paper. After interviewing Sam for her first column, Allie slowly realizes she is attracted to Sam, and eventually Sam admits her attraction to Allie. But their burgeoning relationship is threatened from all sides. Sam comes from a strict, religious family (the book title is also the name of her family church). Allie’s mother is more understanding but still objects to the relationship. There’s even a boy whose crush on Allie pulls her away from Sam.

Homosexuality is not the only taboo topic openly discussed in One True Way; Christianity plays a central role in the story and its characters, a subject not often discussed in mainstream middle grade fiction. The depictions of people’s religious beliefs are quite diverse, reflecting the realities of differing beliefs under the umbrella of Christianity. Sam’s mother, for example, portrays the intolerance often associated with religious judgment of homosexuality; she calls a lesbian character an “abomination” and a “pervert” and reports alleged homosexual behavior to church leaders. However, the character Allie’s Methodist minister Reverend Walker, female and friends with a local lesbian couple, clearly represents a more open-minded Christian view. Reverend Walker talks openly with Allie about the flaws in Biblical arguments against homosexuality. “First Corinthians 14:35 says it’s shameful for a woman to speak in church. Can you imagine? And there are over two hundred verses dealing with slavery, but those verses don’t apply to our lives today. Maybe the same could be said for the Bible’s stance on homosexuality” (p. 132). Both characters come across as realistic, dimensional human beings rather than caricatures of narrow viewpoints. The result is a gentle portrayal of differing beliefs, a welcome change from more heavy-handed rhetoric.

The supporting characters are also realistic, and I particularly related to Allie’s relationship with her mother. Upon hearing her daughter is attracted to another girl, Allie’s mother isn’t supportive, but she doesn’t outright object, saying, “I’m sorry, Allie. I’m usually so tolerant, but somehow it’s different when it’s your own daughter” (p. 112).

When Allie talks about her fear of hurting her mother by being openly gay, I was struck by the memory of my own fear about hurting my mom by coming out, and balancing that fear with the desire to be completely, wholly myself.

These familiar pangs of understanding reinforce my belief that One True Way is sorely needed, for not just young gay and lesbian readers but for all young readers. As authors and illustrators begin to ask difficult questions about writing from someone else’s viewpoint (see Grace Lin’s excellent blog post here), Shannon Hitchcock’s perspective of same-sex first love might be pushed aside for a book written by an openly lesbian author. But Hitchcock has tried to create work that speaks to gay kids and those who care about them. Hitchcock notes that her manuscript was reviewed by “a minister, a lesbian, a gay man, and the mother of a gay son” (p. 207) prior to publication. The result is a story that appeals to any reader who is interested in a young person’s journey to self-awareness through relationships with peers, family, and religious communities.

But the best part of One True Way is the gentle tickle of first love, the moment when two people realize the other feels something too. When Sam and Allie acknowledge their feelings for each other and touch hands, the moment fairly lifts off the page, taking my young, romantic heart with it. One True Way works because it reinforces the universality of the human experience, in religion and in love. Readers are fortunate to have a book like this one.